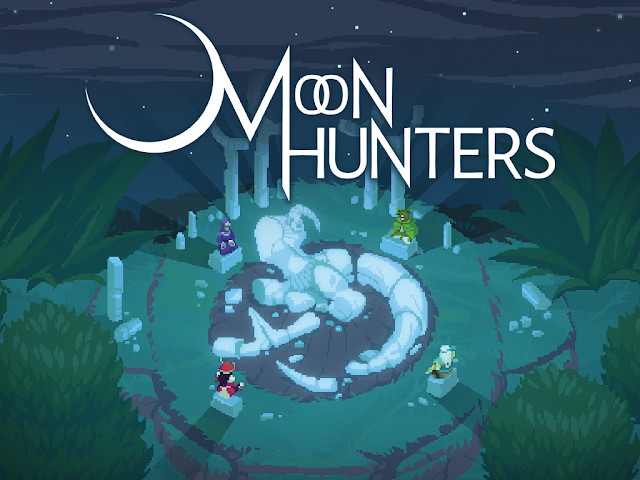 Developer: Kitfox Games
Release Date: 10.26.2017
“We remember something new with each telling.
Together, let’s tell the story again and again,
of those five fateful days, when the Sun Cult rose against us.
The heroes are different, every time.
The world changes, every time.
Journey’s end, but stories live on.
How will you be remembered?
What happens when the moon does not rise for your village’s First Moon Feast? The world erupts in to chaos and only you, our new hero (or 4) can save the world and find out what happened to the moon. This is where we begin our story in Moon Hunters.
Moon Hunters is a 1-4 player co-op game. Boasting as a personality test, it is different from any game I have played (except for maybe The Walking Dead on Steam). The choices you make throughout the game determine what kind of hero you will be. The game is vast, yet feels so short at the same time. Play as your hero over the course of 5 days, build your legend and find out what happened to the Moon Goddess. Show your personality and “create a reputation that becomes your legend” 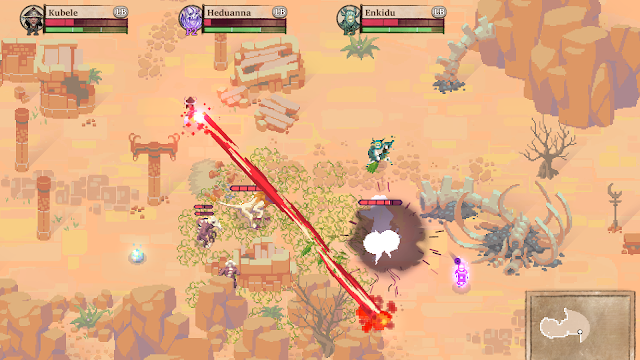 At first glance, the game seemed almost too retro looking for me…that is until I really got in to the game play. Aiming to be a game where you are playing out a legend, I became very attached to the art style both in the graphics and in the character art. As I explored the world, I appreciated all the small intricacies and detail put in to each and every aspect of the scenery, terrain, characters, and battle graphics.

I appreciate that this game veered away from the typical anime-style characters and really added a unique spin on the artwork. It was beautiful and I found myself stopping during dialogue’s to appreciate the characters and the beautiful skill it took to create them. Adding to that, the music was equally beautiful; between the artwork and the music, I found myself feeling very connected to this world and wanting to help figure out what happened to the Moon Goddess.
You begin the game by choosing your hero; who will you be? Will it be
A Spellblade (like a warrior) – type: quick
or
A Ritualist (like a mage) – type: ranged
or
A Druid (like…a Druid) – type: wild
or
A With (like…a witch) – type: strong
There are also 3 unlockable characters. I have yet to unlock them, but when I do I will update this article and let you know what goodies I find (unless you want me to keep it a secret? Let me know in the comments below). You can name and change your hero’s colors in the options.
From there, you decide where you are from:
Dustfolk: Desert tribe that relies on the Seeker of Waters to survive the harsh summers.
Wold Clan: Secretive tribe in the heart of the cedar forest, hiding in the shade of the great trees.
High Tribe: A proud people of the mountaintops, boasting of their closeness to the Moon in the night sky.
Celestin: Nomadic tribe that follows the Holy Ufratu River annually from source to mouth and back again.
There is also an unlockable tribe name One Voice. I have yet to unlock this, but will be happy to provide details once I do.
Once you have chosen your hero and where they are from, so begins the game. This is where one of my major criticisms for the games comes in; there is a lack of tutorial or ‘beginners stage’ per se. You are thrown in to the action with monsters quickly attacking you. I died a decent handful of times while I figured out what my hero could do and what the controls were. It was very confusing in the beginning and I became frustrated as I tried to figure out what each of my heroes could do. The controls are, however, fairly easy to figure out so it wasn’t a long lasting frustration. It just would have been nice to have even a short tutorial to teach you what the abilities are and how to use them. 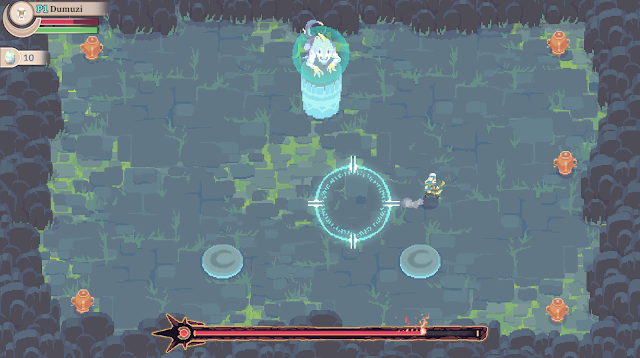 I can say, and this isn’t a criticism, that this game is quite challenging. Playing as a single player was very challenging and I saw the benefit of playing as a co-op. I will definitely be utilizing at least the online play to have more players while I explore the story. The game is very engaging from the get-go; you are thrown in to the action and tested as a legendary hero from the beginning. Will you survive, or will you be eaten alive by the world’s many beasts and monsters?
I found it unique that, in this ancient Mesopotamian-inspired world, it changes every time you start a new game. The game is different every time you play it; each time there is a randomly generated world and adventure levels and different upgrades at each vendor. There is so much to discover that you will not quickly become tired of the game.
As you traverse through the world and try to figure out what the hell you are doing, you will more than likely die at some point. When you do, you will wake up to set up camp and be faced with 5 options, all of which offer some benefit:
Rest will raise your charm (leadership) and endurance (max health)
Stargazing will raise your intellect (magical damage) and faith (max energy)
Hunting will raise your strength (physical damage) and spirit (energy regeneration)
Keeping Watch will raise your endurance (max health) and faith (max energy)
Cooking, well it depends on what you create. There are 104 recipes to discover. My first attempt I created a Moon Cake which gave everyone (in this case, just me) +3 faith ax energy) and blessed. 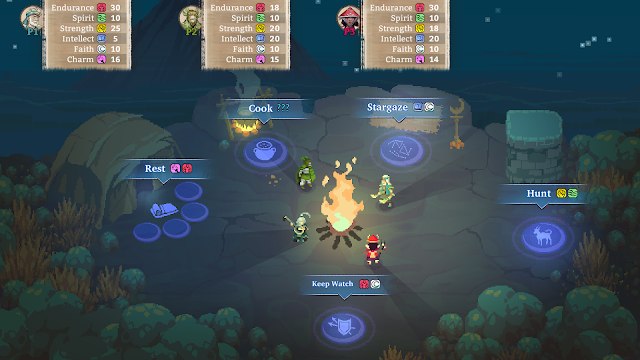 I do have to say, though, that the game does seem overly difficult from the get-go. It doesn’t give you a chance to get used to the game play and mechanics before you’d been devoured by wolves or wild boars; maybe with more than one player it wouldn’t seem as difficult at the beginning. I’m sure that 4 of us would just be running around trying to figure out what we are doing with our lives. One other criticism is that there is no way to target the monsters you are trying to attack, so with ranged attacks you end up wasting energy by shooting spells in random directions. Maybe I’ve been playing too much Breath of the Wild, but I found myself pressing the ZL button all too frequently.
I would be lying, though, if I said I didn’t enjoy this game. I’ve quite enjoyed it and have invited friends to play along with me…and I’m a hermit so this must mean that I truly enjoyed the game. It is engaging and the difficulty just fuels my drive to try again and again until I beat it. So, this is definitely a game that I would recommend to all of my readers. It is another fantastic game to add to your party nights.
Moon Hunters was first announced via the Square Enix Collective in January 2014. In August 2014, Kitfox launched a $45,000 Moon Hunters Kickstarter that would go on to earn $178,000, enabling them to grow the game to include online multiplayer and PlayStation platforms. They have also received help from the Canadian Media Fund’s experimental stream.