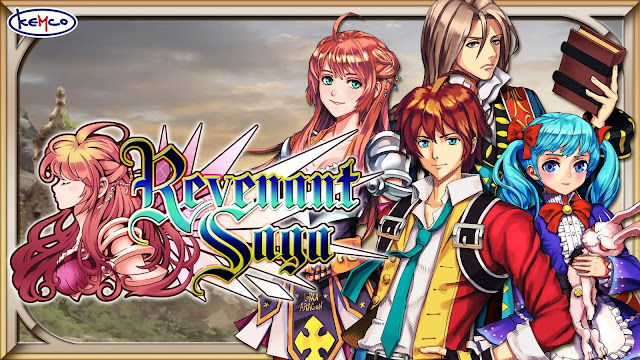 KEMCO has been around since the early days of the NES, and for the last couple of years, we’ve mainly associated them with streamlined, 16 bit style RPGs. Now, they’re offering up Revenant Saga for Nintendo Switch as their standard-bearer.
This was a wise choice. Of the half dozen role playing games that I’ve played from KEMCO, this entry has the earliest “gotcha” moment yet, and that is a very important factor to have in a nostalgiac style of role playing game. What is a “gotcha” moment? It’s the precise moment at which the game plants it’s hooks firmly inside your brain and refuses to let go. 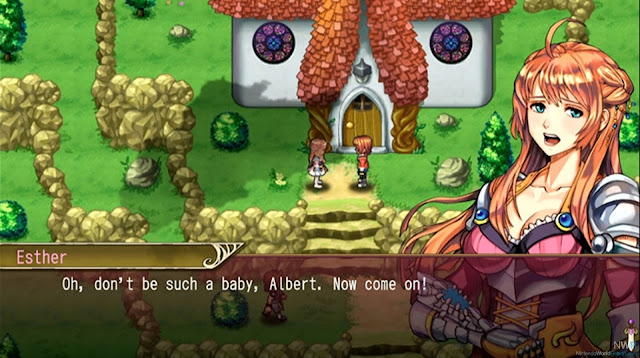 We start off with a fairly standard trope- an antagonist orphaned by the deadly war/disease that has been spreading amongst the villages and leaving destruction in it’s wake. In this case, we have a deadly plague. One that is so virulent, that those whom came in contact with the afflicted are asked to leave in hopes of preserving the town.
Our hero’s (Albert) best friend/possible love interest’s (Anna) parents are afflicted with this plague, and while they are being tended to, a mysterious stranger walks into town to assess the situation. He tells Albert that he may have a solution, but that he will have to come talk to the doctor alone, in the Inn.
After talking to Anna, Albert leaves and goes to discuss this cure with the doctor. He is told that the doctor is working on a cure, and that he needs human volunteers to test the drug on. Those test subjects are not to tell anyone. Albert reluctantly agrees in an attempt to save Anna, and so departs for the doctor’s lab. Albert shows up, and is escorted to a room that he is locked into, and he becomes concerned.
After Albert is in the test chamber, it is revealed that this was a trick, and that the doctor is going to be turning Albert and the others into revenants- a type of demon.
The doctor is interrupted by what is essentially a paladin sent by the religious order in the game. The ensuing conflict results in Albert being only half transformed, and the paladin missing(or dead?), and Albert discussing his current fate with the demon inside himself.
Albert can now transform to utilize the power of the demon, and he vows to use his powers for good, instead of evil, until he can claim vengeance upon the doctor that did this to him, and possibly killed his friend, Anna.
Fast forward two years, and we find ourselves in a world with increased patrols from the religious order, and a need to find an inn to help satiate the hunger of the demon (Magnus) within our protagonist. While at the inn Albert will use to calm down his literal inner demon, he encounters a revenant, and is soon joined in battle by a Valkyrie in training.  From there, we begin our main quest to avenge Anna and Albert’s loss of self. 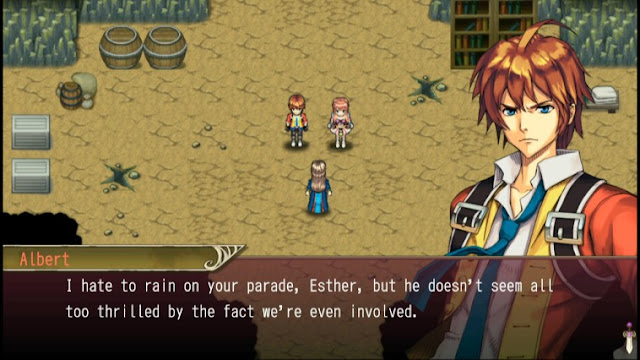 This is, for all accounts, very standard RPG fare. It borrows elements from various series throughout the years, and puts it’s own spin on them. This game is not genre defining, but the story and characters are gripping, even if delivered in more cliches than we would like at times. It has a very streamlined and familiar structure- go to town for story beat, halfway there you pause for a rest, which allows for some more character development. Then, we arrive at the dungeon, fight our way through it while navigating labyrinthine treasure cubbies, and then occasionally running into a boss and more story. Walk back to the last village to report to the religious order, then find out where the next dungeon will be, and repeat.
Thankfully, the characters are interesting, and the story is solid enough. The best part of the characters is how they spend so long keeping secrets from each other, and performing sitcom like levels of backtracking to try to justify their lying existence.
Advantages to this game that older RPGs do not have are the ability to save anywhere in the game, a streamlined customization system, an L shoulder button away from rereading the last little bit of conversation if you accidentally skipped it (or did so on purpose to read it all more quickly to move on), and two different auto battle features. I’m not sure what exactly the semi auto fight feature does, but if you press “X” at the beginning of a fight, your characters will all just attack using normal commands. This last bit is the best way to deal with most of your random encounters.
Even the bosses are somewhat easy, but that’s okay, because we’re not exactly playing this game just for the strategy of combat.
There is, however, a lot that can be done with combat, if you so choose. Most of that revolves around transforming your characters and then utilizing their special skills to give you the upper hand. The drawback to transforming is that you can’t heal, and if your character dies, you have to wait for the end of the battle to be revived.
There are plenty of collectibles to be found, many of which can be used in customizing your weapons by adding attack power, status effects, skills, or stat boosts. There is even a pseudo achievement system that allows you to receive rewards from “record keepers” located around the world, each of whom will give you a prize every time you reach specific milestones.
There is also a modified version of a micro transaction system from the mobile version of the game where you can earn a special kind of currency that allows you to buy “cheater” items like high powered HP restoratives and items that increase party stats like luck and drop rate of rare items. Instead of buying the points with real money, you earn those points by defeating enemies.
Overall, the game is a solid entry in the RPG pantheon, and it felt like exactly what I needed for my Switch. While I didn’t really ever need to grind to progress through the game, as you will be well paced by just exploring your dungeons for treasure, I did find myself doing it out of habit every so often, just because I could mindlessly cut through a horde of monsters with my overly powerful sword, a certain accessory that you get early on, and the X button to auto fight. This isn’t the epic tale to dethrone the classics, but it is a really good homage to them.

I also have my own video game blog, which you can find below
www.fountainarcade.com 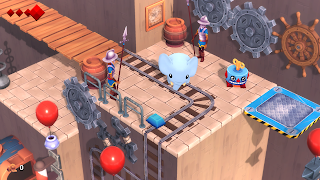 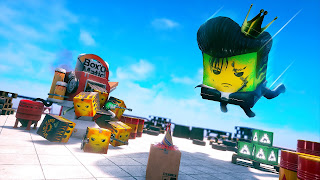