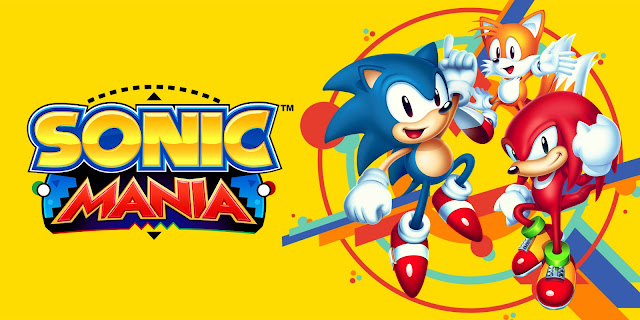 Release: 08.15.17           Publisher: Sega           Developers: PagodaWest Games & Headcannon
If someone told me back in 1991 that in 26 years I would be playing Sega’s hedgehog mascot on a Nintendo system, I would have cried foul. Yet, here we are in 2017 where retro is reigning supreme and I’m staring at the blue blur on my Switch. The craziest part is Sonic Mania, the newest game in the Sonic library, has taken that magic of yesteryear and incorporated it in to a game that feels fresh, while at the same time could have been ripped right out of the ’90s.
Although this title is digital only and available through the eShop, there is a quasi-physical release available for those physicalphiles (yes, I just made that word up) like myself. Regardless of how you buy this, it’s definitely a game that needs to be on your system. From that first screen yelling Sega, to Sonic appearing in his iconic logo, you are instantly transported to a time where games were simpler in graphics but challenging in gameplay. As a side note, if you remain idle on the logo screen for a few seconds, you’re treated to an anime opening reminiscent of Sonic CD. 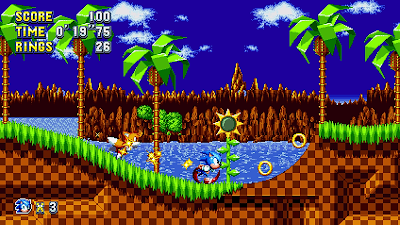 The main menu prodides the following options:
One awesome feature is in the Video options.
You remember those lines on the TV back in the day? If so, then you
can experience the game like it was right on the Genesis with
CRT-Sharp or CRT-Soft modes.
So what about the gameplay? Does it hold up to
Sonic’s glory 16-bit days or fall short like with Sonic the
Hedgehog from the PS3/360 era? I am happy to report that all is right
in the world again as PagodaWest Games and Headcannon delivered! From
that moment you land in Green Hill Zone, that nostalgia wave rolls in
and envelopes you in that wonderful music that for many of us, is
most associated with our memories of Sonic. As you spin, fly, or
glide through the level, it’s like revisiting an old friend as you
collect coins, spin around loops, and jump on all those piranhas.
Seriously, that Zone has a piranha problem, but I digress. Within the
main story are 12 zones each split into two acts. Although I am only
three zones deep into the game as of this writing, there are eight
remixed zones from earlier Sonic titles and four new ones, along with
hidden stages, old and new power-ups, and plentiful secrets to
unlock.
One of my favorite aspects of this game is that
it can be as casual or hardcore as you want the experience to be. For
me, where I have only an hour or two to play a night, it is a great
pick-up and go game. Yet, I continue to revisit the same levels over
and over to try to collect those hidden level coins or the coveted
Chaos Emeralds. Plus, having the different abilities of the three
characters ensures you are going to be replaying levels just to
explore new paths and overcome obstacles in creative ways. 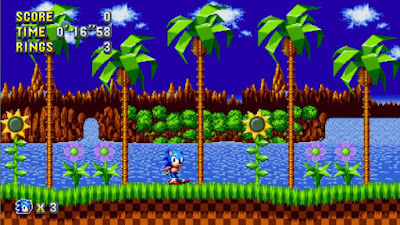 Sonic Mania currently sells for $19.99 on the
eShop or on Amazon [digital code] No matter how
many rings you spend, you won’t be feeling blue about this
purchase.
by Brett Hrin
Leave a comment