Oldschoolgamecollector
Thank
you for giving us this interview. I
came upon your Instagram page and I see that you’re a big
collector. Can you tell us a little bit about yourself?
My name is Josh and I live in Houston, Texas (go
Astros 😉).
Besides collecting games and gaming paraphernalia, I am an avid reader, I play
music full-time and have traveled to over 34 states and 6 countries with music.
Fun fact: I was a Vegas Week Finalist on America’s Got Talent in 2008. I also
am constantly listening to music. If a game doesn’t have a good soundtrack, I
make my own (ha)!
Can
you tell us about how you got into gaming and collecting?
Yeah, the story goes back to 1990. I actually share
this in my bio on Instagram. I was 4 years old and we had finished opening our
presents on Christmas morning when my dad says, “I’ve got one last gift for you
and your brother.” We tear into the present and I’m fairly certain that the
heavens opened, a choir of angels started singing as we stared at a brand new
NES. As overstated as this may sound, it was a life changing moment for me. I
beat Super Mario Bros. as a 4-year-old and I’ve been hooked since. My
father was, and still is, an avid collector of baseball cards and memorabilia.
He instilled in me at a young age not to get rid of certain things, which runs
completely contrary to my propensity to rid my house of anything. I hate
clutter! One of the things my dad told me to hold onto was my video game
collection. I’m so thankful he did. I’ve been collecting ever since. 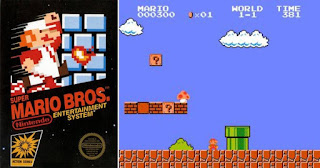 “I’ve got
one last gift for you and your brother.”
What
was the first console and game that you owned?
An NES with Super Mario
Bros./Duck Hunt. I also got R.B.I.
Baseball that day and played it to death.
Do
you have any fond childhood memories based around gaming?
I have a bunch. I remember my best friend in
Elementary School had a lot more money than I did and his family would get him
new games on almost every Friday, so
I would go there almost every week to play. He owned a Playstation and I didn’t
so I played Tomb Raider, Crash Bandicoot, Madden, Final
Fantasy VII, and Resident Evil for the first time over there. I also
remember very well playing Final Fantasy Tactics for the first time. It
was one of the first games that completely engrossed me. I’m still holding out
hope for Square Enix to bring us back to Ivalice!
Were
any of your family members enthusiastic about gaming?
Not really. My father played with me a bit when I
was super young, but he was incredibly competitive. My dad does not have anger
issues, but for some reason Pac-Man brought about the dark side in him
(hahaha)! He would ashamedly tell you he broke quite a few controllers playing Pac-Man
so he hung up the controller.
Let’s jump
forward a bit. Here’s one to get you thinking. If
you weren’t collecting games, what would be your hobby?
I really like to read fiction. Just finished Dan Brown’s Origin and Blake Crouch’s Dark Matter this week! I would probably
spend a lot of my money on vinyl if I didn’t buy old games. I love listening to
good vinyl. I also really like sports, but my interest has waned a bit in the
last few years. I really enjoy playing tennis and do regularly. I’d maybe
workout a bit more J.
As you’re aware,
technology continues to advance the gaming industry. Have you been a fan of
these changes?
I’m not a huge fan of mobile gaming. I like fully fledged out,
engrossing experiences. I bring my Vita, PSPGO, 3DS, or Switch with me when I
travel because I dig full games much more. Although, admittedly, I haven’t
played many mobile games, so I could be way off based on my assertions of
mobile games being surface level. I haven’t tried VR so I can’t speak much into
it.
If the advances you are talking about are in regards to graphical fidelity, I’m
totally cool with that if games aren’t just relying on their aesthetic to sell.
I’m so thankful for companies like Naughty Dog that make incredible experiences
while enhancing storytelling, sound, and graphics. On the opposite end, I don’t
feel that way with games like Final
Fantasy. I LOVED 3/6,7,8,9,10 and 12, but then it seemed like there was a
heavy reliance on graphical enhancements and gameplay started to fall to the
wayside. I bring up Final Fantasy
because it’s my favorite franchise ever. Side Note: I loved A Realm Reborn.
Where
do you think technology will bring us in the future?
I’m no prophet, but if the last few decades tell us anything about
our future, it’s that technology is growing at alarmingly fast rates. A Ready Player One Oasis may not be too
far out of reach within the next few decades. I remember reading that all the
computers combined in the Mission Control Room for the first moon landing
aren’t as powerful as the first generation iPhone. Let that sink in! That is absolutely insane. We have technology in our
hands that far exceed the power of the entirety of the Mission Control room in
1969!

The future
is coming!
We
at The Switch Effect are obviously big fans of Nintendo’s new console. What are
your impressions of the Switch?
I LOVE IT! I am thankful to see Nintendo doing so
well right now. I also appreciate their honesty about their missteps in the
past.
I truly feel like the Switch was made for someone
like me. I travel around 16 weeks a year with music and the Switch goes with me
everywhere I travel to. I literally just landed at IAH and was playing NBA
2K18 the whole flight. Now I’m on my way to pick up Super Mario Odyssey
and I’ll dock my Switch and play it that way when I get home. How awesome is
that? Not to mention, Breath of the Wild is one of the greatest gaming
experiences I have ever had. I can’t really remember the last time I was as
awestricken playing a game. Maybe Uncharted 2.
Which
new games are you looking forward to the most?
Super
Mario Odyssey without a doubt. I’m really pumped for Xenoblade
Chronicles 2 as well. However, I am most excited for Ni No Kuni 2.
The first one was my game of the year in 2013. The gameplay, the sound, the art
style, and the story were all perfect to me. I just absolutely loved that game.
I think I’ll also pick up Skyrim for the Switch. This may be heretical
but I haven’t played Skyrim…. ever.
We
came across your Instagram account and loved seeing your collections. What
interested you in starting a social media account?
Thanks a bunch. I truly appreciate it. I have a
large social media following on my personal/music page, but felt restrained in
some ways. I felt like I couldn’t muddy the waters by posting about my
collection on my Joshua Price Music pages so I decided to start a new
one entirely. To my surprise, a bunch of people went over to the Oldschoolgamecollector
from Joshua Price Music. It’s really been a joy. Sincerely, the best
part is the interaction with other gamers.
What
is the best way for our readers/followers to keep up with you?
I have an Instagram account, website, and I just
started a YouTube channel. The links can be found below.
Last
question now that I’ve run you through the gauntlet. Is there
anything else you’d like to share?
Thank y’all for the interview and happy gaming
everyone!
Thank
you Josh for taking the time to speak with us and we at The Switch Effect look
forward to your future posts and videos!
Follow
Josh by using the links below: