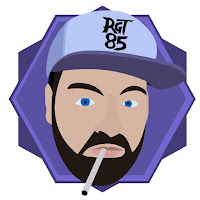 YouTube
sensation, Shawn of RGT 85 fame, joins The Switch Effect on the latest Gabbin’
with Gamers. Before we get to the interview, The Switch Effect just wanted to
say we are huge fans of your channel and congratulations on reaching nearly 60,000 subscribers. Your rants, hidden gems, and other videos are always
entertaining and binge worthy. We are honored to allow our readers a peek
behind the curtain and to learn more about you!
So
let’s start at the beginning. Can you tell us a little bit about yourself?
Of course! So I’m Shawn, 32 (hence
the 85), and currently reside in North Carolina (but am possibly changing that
early in 2018.) I’ve been gaming since I could hold the controller in my hand
and never really looked back. It’s always been something I’ve enjoyed doing and
have had fun doing.
Can
you tell us about how you got into gaming and collecting?
My uncle was a huge part of that.
He had an NES with Super Mario Bros., Tecmo Bowl, and a couple other games and
when I was really young I’d go over there and play them for hours. Then, he got
a Genesis and I got the NES as a hand-me-down for Christmas one year and that
pretty much started the gaming madness.

As far as collecting, I just
started enjoying keeping everything. I’ve had to sell stuff over the years but
lately I’ve managed to keep everything and continue to grow it which is good. I
guess it kind of plays into an addictive personality, haha.
What
was the first console and game that you owned?
The hand-me-down NES and the games
my Uncle had was technically the first, but the first new console I got was a
Genesis Model 2 with Sonic 2 bundle for Christmas 1993.
Do
you have any fond childhood memories based around gaming?
Oh for sure. My Uncle and I would
always stay up mad late playing games on the Genesis like NHLPA 93 and World
Series Baseball doing the home run derby. I remember he got an N64 with Super
Mario 64 and that just blew my mind. I’d play games with my dad too, but he
always said I was cheating because he was super competitive like me. I remember
even my Grandpa played Greatest Heavyweights on the Genesis because he loves
old-school boxing and he loved the fighters in the game.
Let’s jump
forward a bit. Here’s one to get you thinking. If
you weren’t collecting games, what would be your hobby?
Well, to be perfectly honest, if it
wasn’t for video games I’d be dead or in jail. That’s real talk. I made a video
about it on the channel last year. When I was in High School I started hanging
with the “wrong crowd” or whatever and was doing a lot of drugs. We
had a snow storm and I couldn’t go anywhere so I took the PS2 out and played
Metal Gear Solid 2: Sons of Liberty for the first time. I got sucked into it.
The story was just so crazy and mind-opening that I wanted more. So I got heavy
into that series and found my way back to gaming. A lot of those people from
that period of my life are no longer with us, in jail, or just in a bad place
in life. So I probably would have ended up like that honestly.
As you’re aware,
technology continues to advance the gaming industry. Have you been a fan of
these changes?
Some of it I like, some of it I
don’t. Obviously the more powerful systems allow for more creativity and
graphics in games, which is great. Things like the Nintendo Switch are breaking
down the conventional barriers of gaming and what a home console or portable
console can actually do.
As far as the negatives, I’m not a
fan of “online only” games because they essentially date themselves
(look at MAG on the PS3 for instance, now it’s a coaster.) Loot boxes, massive
patches, all that stuff is annoying as well. I also think VR is overrated and
will never be a mainstay or replacement for gaming the traditional way.
Where
do you think technology will bring us in the future?
It’s interesting because we are
starting to get to a point where the graphics are so good they can’t really get
much better. Things like VR and AR are interesting, but I don’t think they will
ever be mainstream. Motion controls came and went as well. I honestly think as
far as technology goes, it will be ways to break the mold, sort of like the
Switch is doing.
We
at The Switch Effect are obviously big fans of Nintendo’s new console. What are
your impressions of the Switch?
I love it. It’s an amazing
platform, the library so far has been insane, and it’s become my platform of
choice. Playing on the PS4 or Xbox One is fun still of course, but I hate being
tied down to my TV with those. The Switch is just so much more versatile.

Which
new games are you looking forward to the most?
Honestly, November is insane when
it comes to games. I’ve got Sonic Forces ordered to review it but I don’t
expect it to be great or anything. DOOM on the other hand? I am so stoked for
that. I played it on the PS4 and loved it, and I want to revisit it on the
Switch. Skyrim is another game on the radar, and I really like the Resident
Evil Revelations Collection as well. Then Xenoblade in December, plus tons of
indies. So there’s lots of money that will be going towards the Switch.
Now
let’s talk about your YouTube channel. As mentioned earlier, we are HUGE fans
of your work. How did you get started making videos?
It’s a weird story honestly. I was
(and still am) working for Nintendo Enthusiast and I noticed they had a YouTube
channel with 400 subs and I was like “Wow that’s a lot I want to make
videos.” So I asked if I could and they were like, have you ever made a
video? I hadn’t but they were like try it anyways. So Jason Lepine and I sort
of built up that channel and it was fun, but everyone had side projects. So I
started RGT 85 as a side project, and then it turned into a beast of its own.
Congratulations
on just passing 59,000 subscribers on YouTube. That is no easy feat, but very
well deserved. Did you ever expect to become as huge as you have been and what
do you want to say to all your fans?
Not at all honestly. I just wanted to
make some retro and SEGA videos and not be only able to talk about Nintendo
stuff like on Nintendo Enthusiast, and it just took off. It’s been absolutely
insane, and I appreciate anyone who has ever watched a video and left a comment
or subscribed. It’s all pretty intense.
As
2017 starts to draw to a close, what can everyone expect from RGT 85 in the
coming year?
Honestly, 2018 is going to be insane
for me. I can’t really say too much right now, but there are some BIG changes
coming in 2018 for myself personally and the channel that will benefit both in
a big way. So keep your eyes peeled 🙂
Last
question now that I’ve run you through the gauntlet. Is there
anything else you’d like to share?
Thanks for interviewing me! And
thank you to everyone reading this and all those who support the channel. You
guys rock!
Thank you again for taking the time
to speak with The Switch Effect and for our readers to learn more about your
gaming passion. We look forward to your future videos!

To follow RGT 85, make sure to use
the links below: