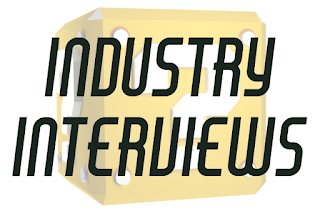 Joining The Switch Effect today on Industry Interviews is
Amanda Gardner. Amanda is not only the co-founder of The Deep End Games along
with her husband Bill, not only the writer for Perception, a new first-person narrative adventure with a very
unique twist, but also a mother of four! Together, this unstoppable duo
recently released their debut title, Perception, to the PC, PS4, and XB1
earlier this year with a slightly remastered version to the Nintendo Switch on
Halloween!
Perception
focuses on Cassie Thornton, a blind woman traversing the Estate at Echo Bluff
in Gloucester, MA for answers to her recent nightmares. Although Cassie arrives
at the Estate for her own reasons, she soon realizes that the inhabitants,
spanning many generations, will come to rely on her abilities to unlock the
mysteries that had befallen them.  Cassie
is able to understand the memories imprinted onto objects, called Touchstones, use
a Delphi text to speech app, locate audio logs, and tap her cane to produce an
echolocation of her surroundings. This last ability draws the game’s
antagonist, The Presence, to her. If you haven’t hidden under the covers yet,
or even if you have, go to the eShop and download this title today. 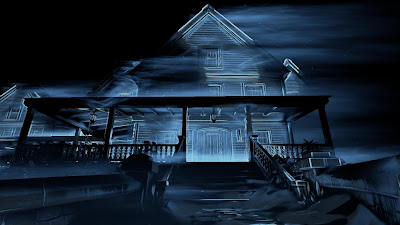 The Estate at Echo Bluff


Amanda, thank you for allowing us the opportunity to
speak with you about your background, The Deep End Games, and Perception.

Having spent over
a decade teaching advanced level high school English, it comes as no surprise
to learn you were the writer behind this gripping tale. However, what inspired
you growing up to pursue a career in teaching and writing?
I used to edit my friends’ essays for fun! Haha.
Seriously, I’ve always been a storyteller – when I was in third grade, I used
to come up with plays based on my favorite TV shows for my friends to act out.
I read the Lord of the Rings Trilogy in first grade. NERD ALERT! I’ve always
been into a good story, whether it be in books or in games, so I really thought
teaching was the right fit. Then, once I had children, I started flexing my
fiction muscles and writing books. With Bill’s background in AAA games, it all
came together with Perception!
Did you ever think
you would be writing a story for a video game?
I knew I’d be writing stories, but I didn’t consider
games until Bill brought it up to me. I mean, it’s a natural fit, but I was
sort of entrenched in the novel thing until Perception. I still do write books, but man, writing games is so
different and exciting! I can rely on the environment for storytelling, and I
need to be concise about my dialogue!
How has that
experience been for you?
It’s been a wonderful learning experience. Bill knows so
much about narrative games and immersive storytelling from the BioShock series, so I had a great teacher
in that respect, but with my decade plus in the classroom, I was able to bring
a hint of classic literature to the game. That was really fun for me.
You and your
husband, Bill, who is no stranger to the video game industry, formed The Deep
End Games. Previously Bill had worked as Level Designer, Lead Designer, Design
Director, and User Experience Specialist for Irrational Games on titles such as
SWAT 4, BioShock, and BioShock Infinite.
Can you speak to
Bill’s experience between moving from an employee of Irrational Games to
forming The Deep End Games alongside you?
It was exciting but scary. I had quit teaching to stay
home with our kids and write books when the studio closed, so we had a few
months where we had to have the “what do we do?” conversation. It wasn’t easy,
but Bill and I worked so well together that things just came together for Perception and, despite it being the
hard thing to do, we made it happen.
What has it been
like to work together on a project with your husband?
Good, but the work-life balance thing was a bit
challenging! The lines were blurred – family time, work time, marriage time, it
was all together. We’d go on a much-deserved date and end up workshopping a
scene, you know? We’d go to a soccer game for one of the boys and discuss a
scare. It was immersive.
The third component of bringing Perception to life was the Audio. With Cassie having to rely on her
hearing to navigate the estate, we could think of no one greater than Jim
Bonney to lead the way work on this project. Having also been in the gaming
industry for many years, Jim brings much experience as an Audio and Music
Director.
Can you speak to
Jim’s experience while working on this project and the talent he brought?
Jim is AMAZING. In fact, when Bill was conceptualizing
the project, he didn’t blink before he blurted “Jim Bonney” as being the first
person to contact. Jim is brilliant and he really brought the sounds in the
game to the next level. Love him!
Technology
continues to advance and Perception, which we will get into in a bit, helps to
push the boundaries of gameplay even further. You’ve touched upon in past
interviews the extensive amount of research into blindness and echolocation.
You even had the opportunity to meet with Daniel Kish, a famous echolocater and
head of World Access for the Blind.
Did your meeting
with Daniel change the way you had previously viewed echolocation?
Daniel solidified and amplified our research in a way we
didn’t think possible. He’s so adept, so brilliant, and just so amazing. It was
inspirational and really moving just to spend time with him.
Moving onto
Perception, this game was originally launched as a Kickstarter in 2015. It was
met with success and even exceeded the original goal.
During your
Kickstarter run, what were the feelings you both had as you continued to see
support for your debut title?
It was scary and exciting. Every day was a new challenge,
and new excitement and information. Really overwhelming! I was happy when it
was over, as I was 8 months pregnant and stressed, but wow, it gave us a wonderful
community and friends we still have contact with.
Additionally, once
the game began being previewed all the way to releasing on various consoles,
how have you and Bill handled the excitement?
The Switch had us
jumping for joy(con)! Haha. Bill and I are Nintendo FREAKS, as are our
children, so this was the biggest honor for us, obviously. We even went as a
“Smash Brothers Family” one Halloween. We LOVE Nintendo! 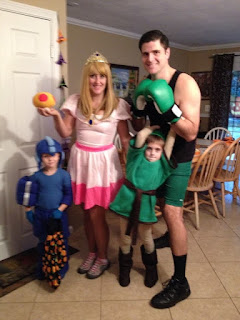 Super Smash Gardners!
At the Switch
Effect, we obviously are big fans of the new Nintendo Switch.
What are your
thoughts on the Nintendo Switch?
It’s an AMAZING console! We love the portability of it,
the games for it are top notch, and it’s nothing short of Nintendo perfection!
For those who have
previously played Perception or are joining Cassie on her adventure for the
first time, will be pleased to know that the Switch version has been
remastered. From newly recorded lines, to new audio, reworked gameplay, and
achievement trophies, there is much to be excited about as you navigate the
Estate at Echo Bluff.
Were there any
challenges that were unexpected?
Not really.
Having children of
our own, many at The Switch Effect understand the importance of a healthy
work/life balance. How have you and Bill handled the enormous responsibilities
of developing your own game in conjunction to raising FOUR kids?
It. Was. Hard. Especially having TWO production babies,
one after another! It multiplied the stress x1000 because we weren’t sleeping
well, and I was under a lot of physical stress during the pregnancies. But they
are what’s most important, and we do what we do for them. When things get
tough, we reminded ourselves that we are making this game for their future and
for us to be able to be with them.
Finally, is there
anything else you’d like to share?
Thank you for having us and please check out Perception on the Switch!
Thank you as well for taking the time to allow us this
peek behind the curtain. Additionally, if you’d like to learn even more about
Amanda and Bill’s journey, Gameumentary put together The Story of Perception & The Deep End Games Documentary, that
is available by clicking below.
Perception is
now available to purchase on the eShop and is one game that needs to be on your
Switch today!

To learn more about The Deep End Games and Perception, use the links below: