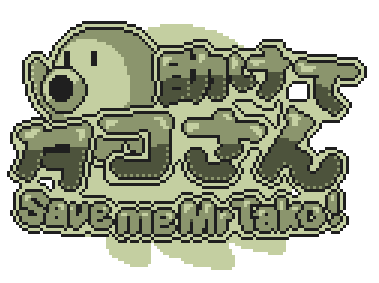 Thank you
Christophe for speaking with us today. With your upcoming game, Save me Mr.
Tako, coming soon to the Nintendo Switch, we thought it would be a good
opportunity for our readers to learn more about you and this blast from the
past inspired game. Can you tell us a little bit about yourself and your
involvement in the gaming industry?
I’m a 23 year old French indie game developer. I started
making games when I was 12 with RPG Maker and started pixel art at this time.
When I was 18 I went to Isart Digital, a Game Design & Programming school
in Paris. I got my degree in 2015 and then worked in the game industry for 2
years to repay my student loan, while doing many game jams. I started to work
on Tako-San in 2014 in my free time. Thanks to it, I had the chance to travel
the world the past 3 years and go to many indie game events like Tokyo Game
Show and PAX West. That gave me the confidence to leave my job and start
working full time on Tako.
We wanted to
congratulate you on the announcement that your upcoming game, Save me Mr. Tako,
will be published by Nicalis, Inc. on the Nintendo Switch. From watching the
official trailer and other videos, this game feels like it came right out of
the Nintendo Game Boy era. Could you share some details and background about
this game and what gamers can expect in terms of gameplay?
Thanks! I can’t wait for everybody to finally play the
game! The trailer was focused on the “Game Boy” aspect of the game and shows
the basics of the gameplay: the fact that you can turn your enemy into
platforms, fight bosses, find many power-ups, and so on.  My next goal is to show that the game is a
full adventure, with a lot of levels and dungeons, a deep story with many
characters and hidden flashback sequences. With this game I wanted to tell a
story with a meaning and I hope you will all like it.
What was your
reasoning for making such a nostalgia looking game?
I started the game as a homage for Game Boy’s 25th
Anniversary. I always loved the Game Boy aesthetic, at this time I was learning
Unity, and I had a pretty depressing job, so working on my own game during the
night was like a reward for me. I ate Takoyaki for the first time and got the
vision of an Octopus character. After that, everything fit together in my mind
and 3 years later here is Tako. 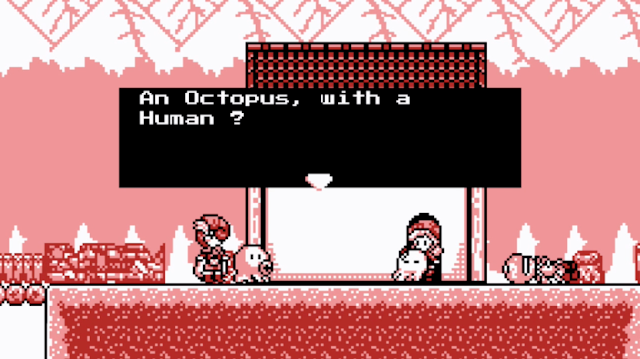 This game has
all the charm of the 90s Game Boy era!
Could you share
some details behind the process of making a video game?
I don’t know if I’m the right person to give advice as
most of the choices I made during the development were very risky. However, it
worked mostly because I did the game alone and had a great composer who
accepted to work with me for free since almost the beginning (the super
talented Marc-Antoine Archier). What I can say is that you have to commit to
your creative vision and believe in what you do because you are your own worst
enemy. Make people play your game and see how they react and get their
feedbacks. Always try to go out of your comfort zone by twisting every
mechanics to a lot of uses. Also, never forget to communicate and to make your
game appealing and very polished because making a good game is not enough to
succeed. I had the chance that it pays off for me and to get a nice publisher
to help me polishing and porting it.
How did you and
Nicalis, Inc. find each other?
I sent them the first demo of Tako back in September
2014, through the form on their website. I wasn’t expecting anything as I only
wanted their feedback because I love their games. I was so surprised when they
answered me, saying that they love Tako, and to keep them in touch with the
progress. That’s what I did, sending them gif once in awhile. Then in 2016, I
was selected for the Tokyo Game Show and we finally met there. Then we
negotiated a contract and signed in May 2017. We are working on the Switch
version since then. 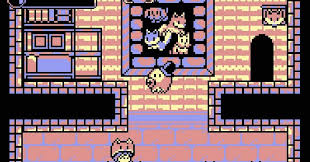 Tako-San!
Has a release date
been set and can we expect to see a physical edition of this game or will it be
available on the eShop only?
No release date yet as the game debugging phase is coming
to an end, so now we have to submit it to Nintendo and this process can take a
while. As it’s a new game, I don’t think there will be a physical edition for
the release, but if the game sells well it’s clearly something that can happen
later!
Where can our
readers learn more about your work, Save me Mr. Tako, or any future
announcements?
I communicate about the game mostly through my Twitter,
@ChrisDeneos (https://twitter.com/ChrisDeneos)
. If you want to see the evolution of the game through the year, you can check
my IndieDB page where I used to post news of the progress:
http://www.indiedb.com/games/tasukete-tako-san-save-me-mr-tako
Is there anything
else you’d like to share?
Thank you for the interview and thanks to all the people
that support me. It really helps to not getting depressed, haha. Stay tuned! A
lot of things are coming!
As a final bonus
question, what system and game introduced you to gaming?
Hard to remember with which game I started. I had the
chance to have a big brother who is a game collector, so I was able to play
games that were not from my generation (like the NES or the first Game Boy). It
made me grew up as a retro gamer and I’m very grateful for that. But the games
that leave an impact on me where mostly Nintendo Games and JRPG, like Zelda,
Final Fantasy VI, Kirby Dream Land and Metroid.
Thank you again
Christophe for taking the time to let us learn more about you, your passion for
gaming, and your upcoming release of Save me Mr. Tako. Make sure to follow
Christophe to be kept up-to-date on all the latest news and we at The Switch
Effect cannot wait to play this game!
Christophe Galati
can be followed here: