Whenever I see the Devolver stamp of approval on a new title, I just know that there’s a certain level of polish that’s going to come from the game. I think of The Messenger which is one of my favorite games I’ve gotten to play on my Nintendo Switch and I consider it the best 2D platformer of the current generation. Akiisoft’s Katana Zero is a title that I felt could surpass The Messenger in terms of entertainment, and while I think I may have preferred The Messenger I had an absolutely fantastic time with Katana Zero 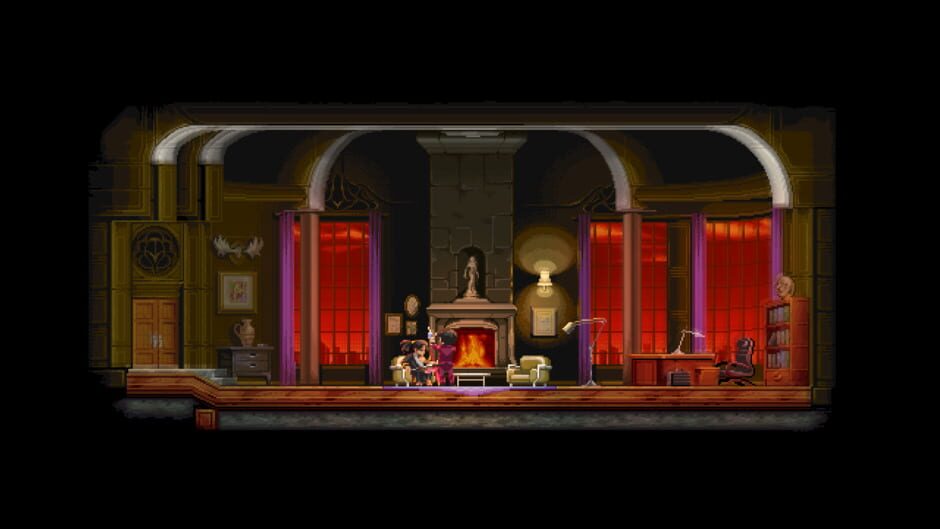 Katana Zero is a 2D action platformer that has you play as a samurai who’s true identity is unknown. You receive a new mission every day from your therapist to take out criminals essentially becoming a hitman. The samurai’s past is very vague as he’s unable to recall any it. Essentially all he knows is he goes to a therapist to talk about his strange dreams, and receive an injection. Every day you receive an injection of a substance called Chronos. You’re not really sure at first why you have to receive the injection, but the reason is revealed later on in the story. Eventually you’ll learn the truth about your identity as a veteran and what happened in your past and you’ll understand that things haven’t been how they seemed.

During the story you’ll meet with lots of different characters like a homeless veteran, and a drug dealing DJ. Many of the conversations you have will be with your therapist and you get dialogue options during these conversations. What’s most interesting is the fact that almost every dialogue has an option to say something as soon as it pops up, while more options will appear if you wait. This helps establish the personality and emotion you want the samurai to have. If you abruptly choose the first dialogue option you may upset the person you”re speaking to or miss out on asking a question. However, sometimes you’ll be so worked up that you want the characters to understand how you feel. Honestly for a game that has such action-focused gameplay I never imagined I would become so enthralled with its story. I was always on the edge of my seat wondering what that dream meant, or who’s that mysterious person? Even if you’re not a fan of action platformers, Katana Zero is simply worth playing for its incredibly deep narrative 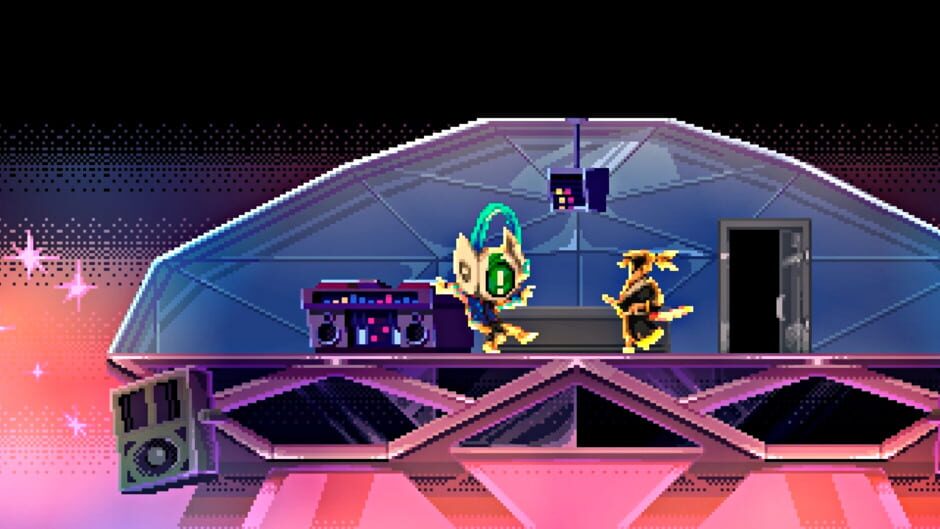 Katana Zero is not a title that’s going to simply let you breeze through each level. It is brutally difficult and your reflexes have to be spot on all the time or you’ll be making a ton of extra attempts. While the difficulty is high you also aren’t punished too bad for failing. Each level has multiple rooms to run through, and defeat all enemies within. If you’re hit in one of these rooms and are forced to restart you only restart from the entrance of that room. So you don’t have to worry about having to restart the entire level. Furthermore, when you make it through a room the infamous words you’ll come to love “Yes that should work” will pop up and a replay of how you made it through that room will start to play. I died a lot through my playthrough of Katana Zero, but it’s handled so well that it never made me angry. I never got too frustrated except with a few rooms that took me more than a dozen tries.

To get through each room you’re going to have to assassinate the enemies within it. You can do this from a stealth approach or just run in slashing. It’s easy when your only enemies are just using their fist or an up close weapon, the problem is many enemies have guns as well. I personally think that’s cheating they they’re using guns, but my dad always told me to never bring my samurai sword to a gunfight so I blame myself. Anyways when trying to take out an enemy with a gun you’ll probably use your ability to slow down time.  Yes you read that correctly you have the ability to slow down time for a certain amount of time. There’s a meter at the top of the screen that’ll deplete as you use your time slowing abilities and it replenishes passively. Once you’ve slowed down time you can rather wait for the enemy to shoot and reflect their bullet with your sword, or roll behind them and cut open their back. Using this ability will crucial to your success as there are many foes that’ll, become much easier to take down once you’ve slowed things down 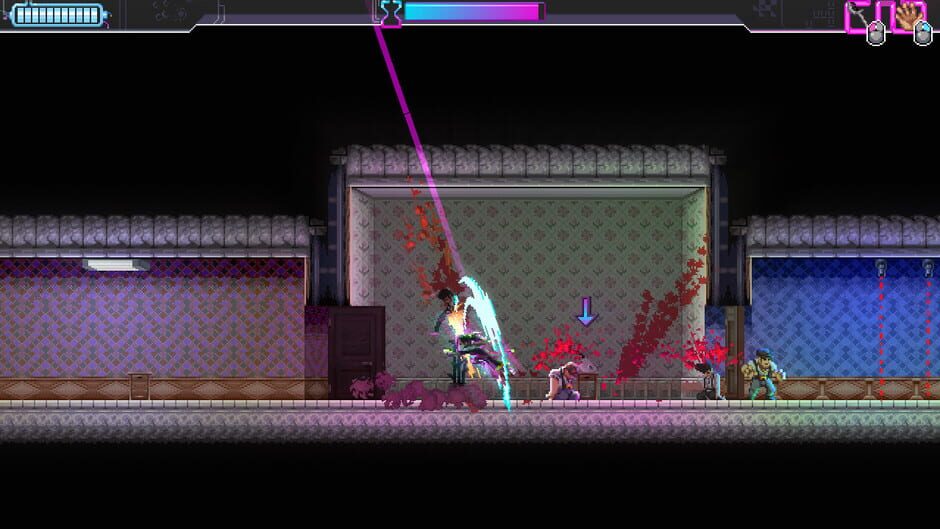 Paying attention to your environment is also of upmost importance. There’s plenty of items you can pick up off the ground to throw at enemies, and vantage points to use. I’ve had a lot of trouble with a room only to find there was a platform that would have gave me better access to the enemy I was trying to take out. Another example is in some rooms you may see rows of explosive barrels. That means there’s probably a molotov cocktail somewhere in that room and if you can find it you can make your job a lot easier. The attention to detail that’s found in every aspect of the gameplay is amazing. My only real gripe with the gameplay was that I felt there were a few times where the rooms felt too empty and didn’t have enough in them. Fortunately I didn’t get that feeling often and instead was usually thinking about how awesome it was to play as a samurai with time bending abilities. 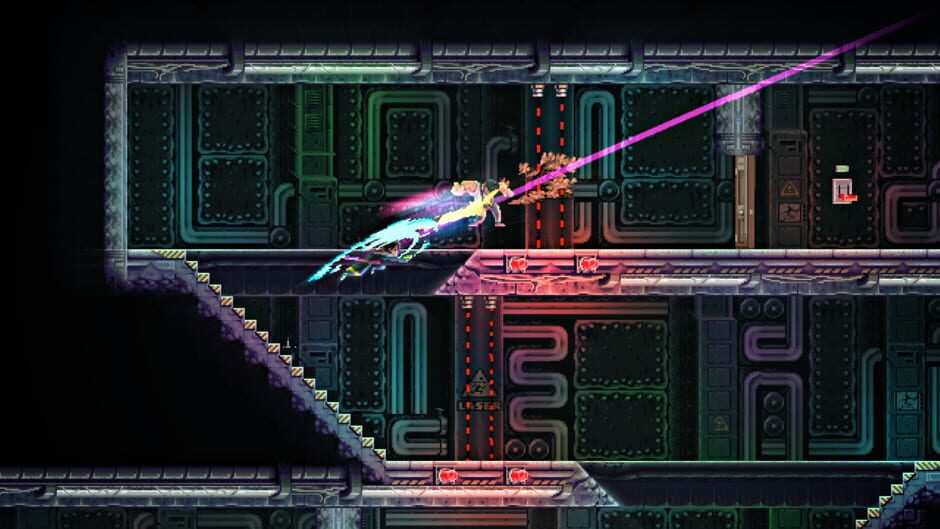 If you’re looking for a cute pixel art style title to calm you after a hard day this is ABSOLUTELY not the game you’re looking for. Katana Zero is the most violent pixel style game I have ever played. It’s gore is quite intense for a game of its caliber, but that’s okay. Katana Zero was meant to be this over the top in its action and I respect that in the presentation. Environments always look good, and while sometimes rooms or areas can be a bit too similar that didn’t stop them from being awesome to playthrough. Enemies look good and have quite a bit of diversity. From the common thug, to the flying robot who’s out for blood, they all look great. The whole game has a very satisfying presentation that you won’t find in many other titles.

I know I don’t talk about the soundtrack often enough in games, but Katana Zero’s soundtrack is absolutely fantastic. Before every level your samurai will switch on a new track from his phone and away killing he goes. The soundtrack is mixed so well with the insane combat, and makes everything flow perfectly. Each track fits so extremely well with the setting and I honestly cannot praise the soundtrack enough.

I experienced no problems with Katana Zero during my playthrough. Resolution and frame rate were perfect when docked and in handheld mode.

Katana Zero is one of my favorite titles this year and I don’t think that’s going to change anytime soon. It’s amazing narrative combined with fun fast paced action is something that not many games can simulate. While some of the environments did look a little too similar and empty that does not mean Katana Zero is any less fantastic. I can honestly say it’s my second favorite 2D platformer of recent years and my second favorite Devolver Digital title ever. Katana Zero also earns my first 4.5/5 rating. Thanks Askiisoft