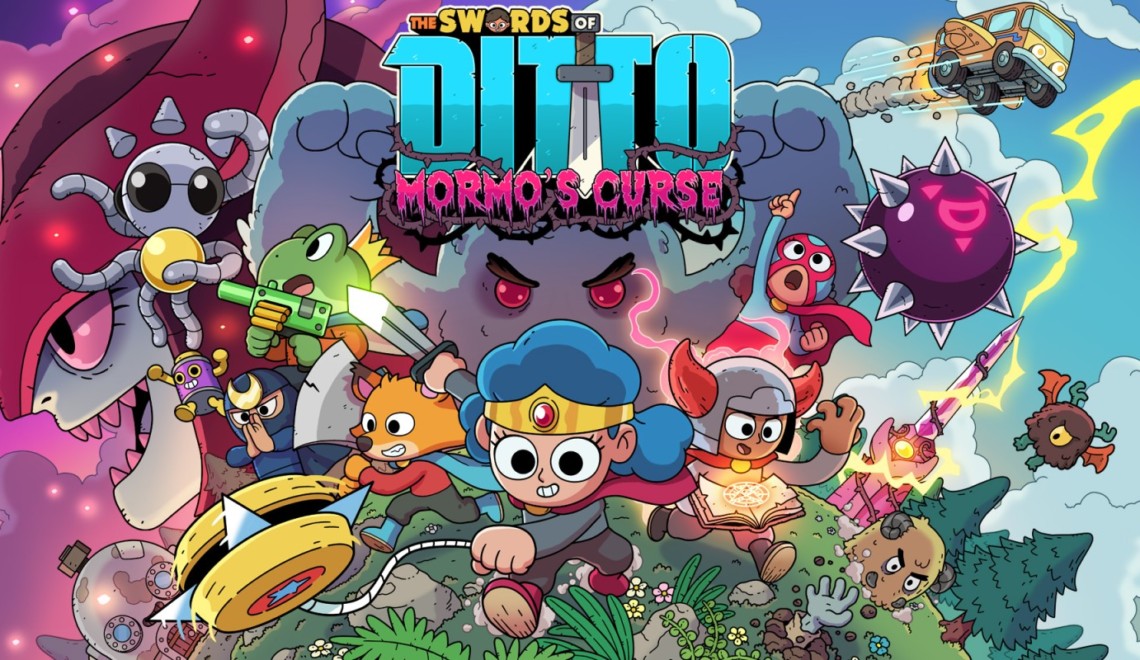 The Swords of Ditto: Mormo’s Curse

When I first started The Swords of Ditto: Mormo’s Curse I asked myself if this was Cartoon Network’s take on The Legend of Zelda, and, even if this is not the case, I can say that I wouldn’t mind at all. 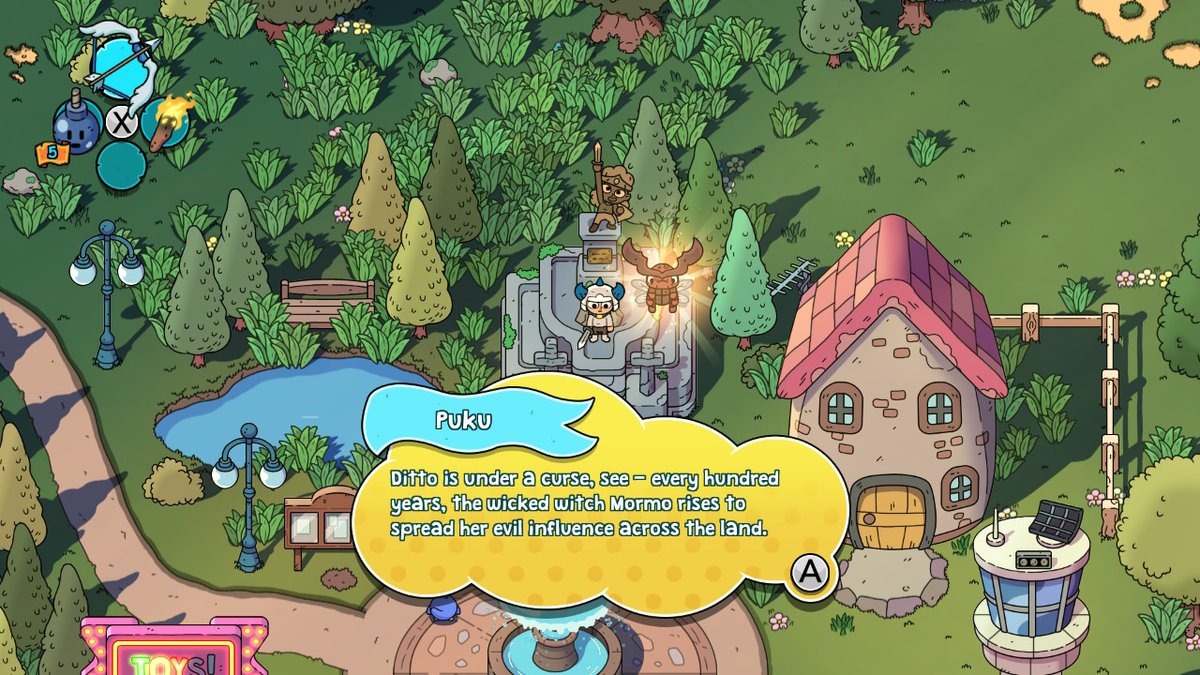 Puku, a giant spiritual beetle, will help you throughout the journey.

The Swords of Ditto: Mormo’s Curse is a roguelike RPG that blends the gameplay from The Legend Of Zelda: Link’s Awakening with Enter the Gungeon. It’s also an updated version of the original game, The Swords of Ditto, that adds new features, such as new items, dungeons and fixes most of the issues that the previous version had.
The story is fairly simple: you wake up in the Island of Ditto, that is cursed by an evil demon called Mormo. You must take the sword, complete dungeons, collect toys that will help you through the journey and defeat Mormo to break her curse…until she comes back after 1000 years, stronger than ever. The game takes a new brilliant take on the “Chosen One” narrative: whenever the sword dies or when they defeat Mormo, a new Sword awakens 1000 years later. But not only that, the island of Ditto will change after all of those years: most of the characters you encountered in your previous journey will vanish, dungeons will change and the areas of the island will evolve into something new. 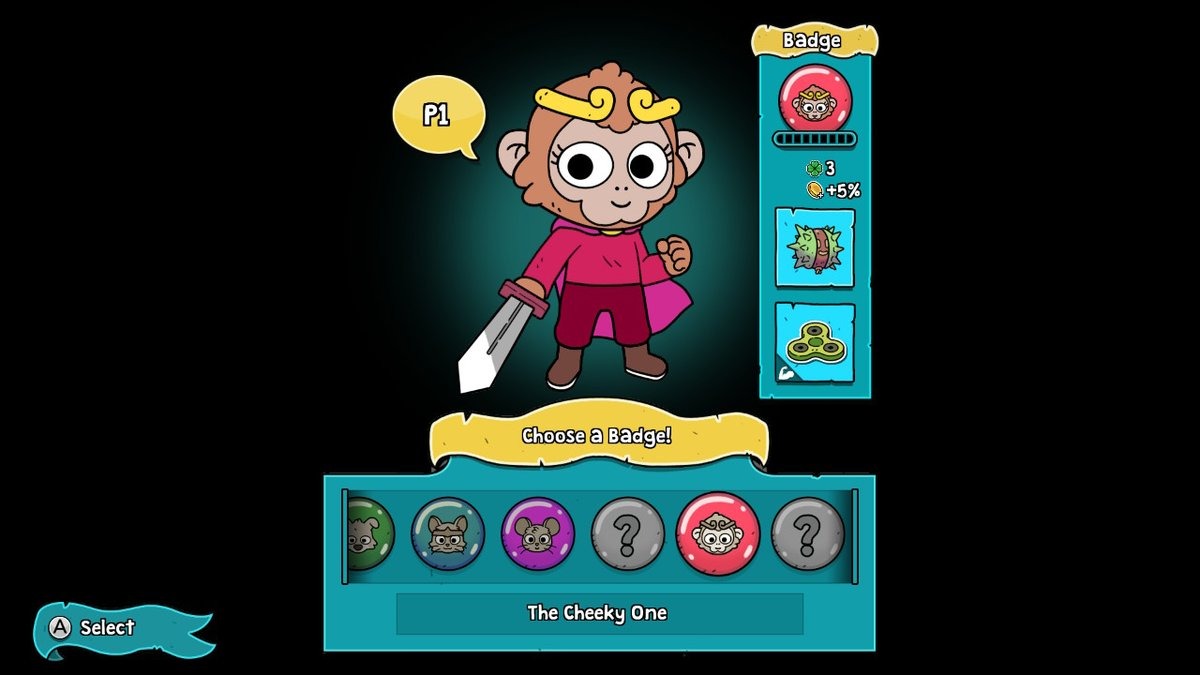 The gameplay is fairly simple yet addictive too: defeat monsters with your might sword, collect new devices called “Toys” that will help you through the journey, find new stickers, that act as upgrades for your character and explore dungeons to find more of these items. It all looks very Zelda-esque:  there also are pots to throw and weeds to cut!
Being a roguelike though, every time a new Sword appears, you lose everything but your level ups. Surprisingly enough though, the game is not unforgiving: it might be fairly easy to die right off the bat, but once you get how to use the mechanics of the game, and learn how to use the toys to your advantage, dying might just not be an issue. The game also includes a handful of unique locations (mostly shops) and NPCs (mostly shopowners), that not only look good, are very useful, such as Pengo and the Pengwahs, that will increase your bomb count or Lik, a shopowner frog that will sell you stickers and open new sticker packs for you once found in the wild. 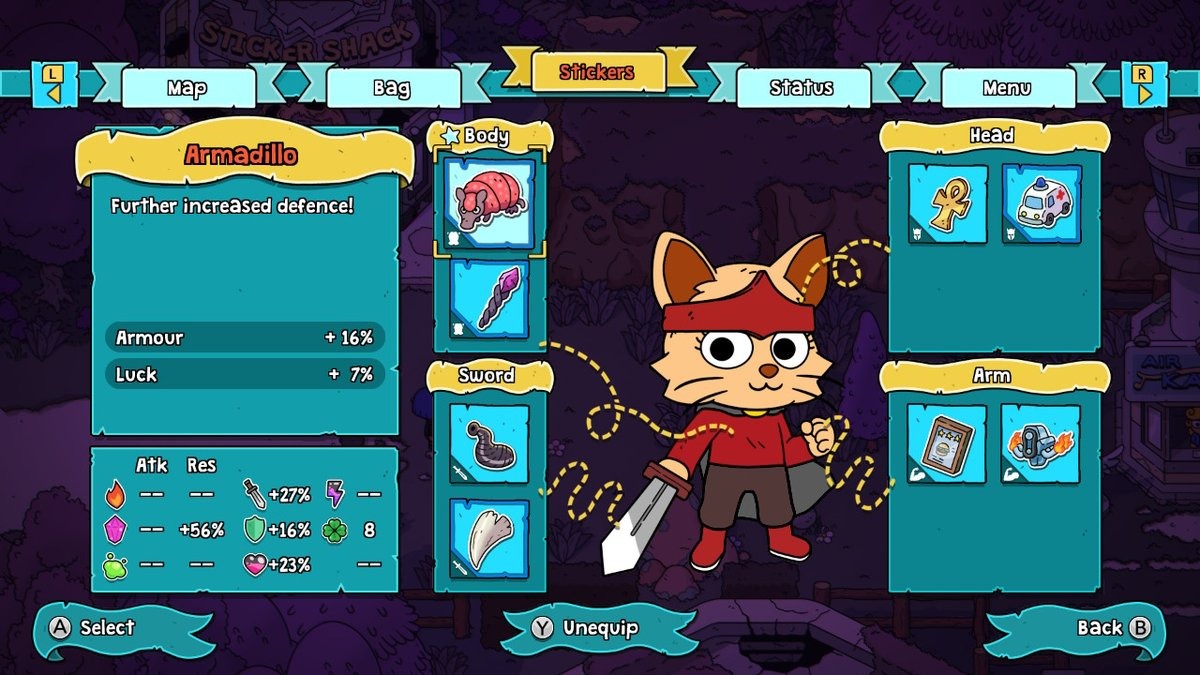 Stickers will mostly increase your stats.

But it isn’t all peaches and dandelions: to some, the gameplay might feel a bit too repetitive and grindy, since most of the time all you will do is explore, beat monsters and explore the randomly generated island. For the most part, dungeons aren’t worth all the hassle unless you like solving puzzles, considering that you’ll rarely find new stickers or toys. The boss fights are very repetitive too since most of the time you will be battling against fallen Swords that play exactly as you do. And the game has tons of loading screens. I don’t normally care about them in videogames but in The Swords of Ditto, sometimes, they’ll just drag for too long, making me wonder if the game was about to crash. 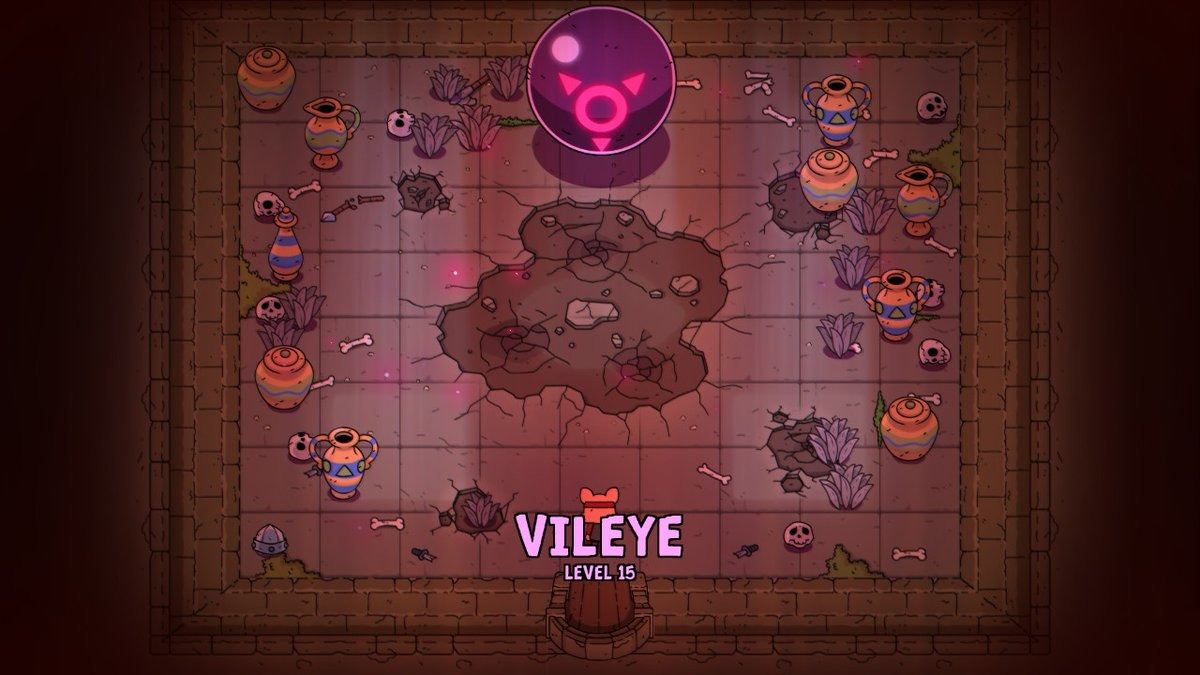 Personally, I don’t think that those were problems for me (except for the loading times, hated those!) but I had a few major letdowns: the story is unoriginal, the people of Ditto don’t feel “alive” at all, the quests they give are often boring (except when they give you a key to open a new dungeon, those were fun!) or the rewards were useless. 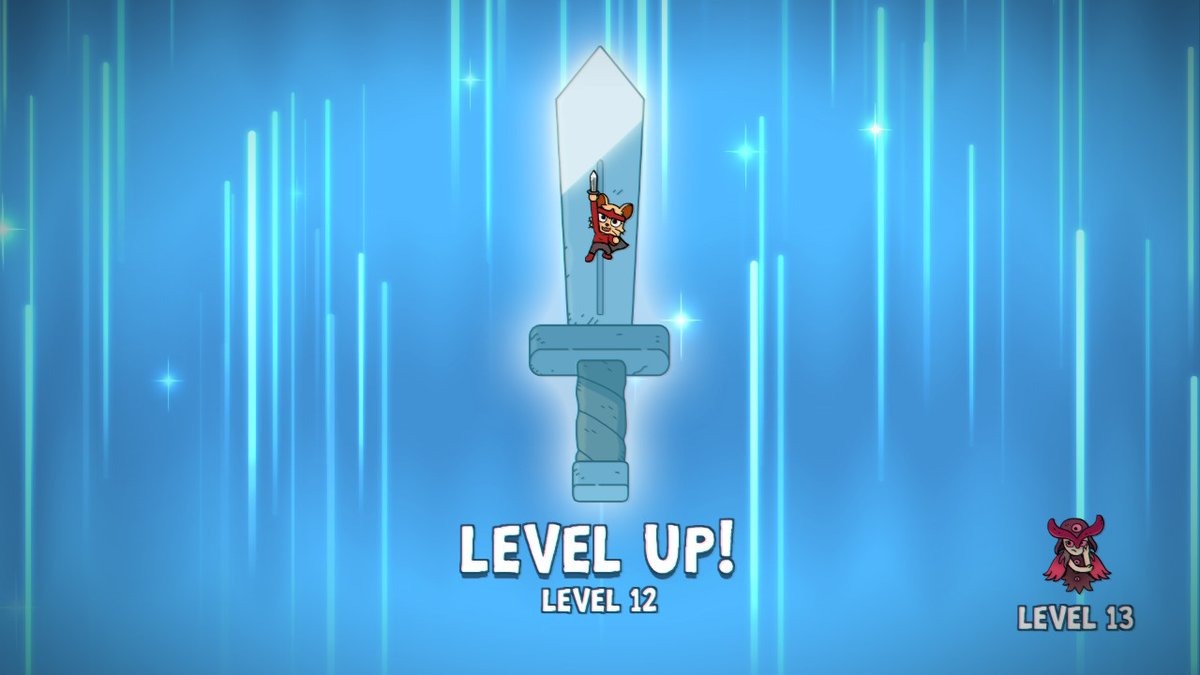 I’m coming for you, Mormo.

BUT, and I say BUT, I think that what the game is offering is really well done: the cartoony graphics are extremely well done and look adorable and the music, composed by Salkinitzor, sounds like it came straight out of Gumball. Each run feels different enough from the last to have a blast, you can play in couch co-op with a friend to have double the fun and it just feels so rewarding when you complete a dungeon. The toys are very fun to use and often unique, and they, along with the stickers, provide that extra “spice” that the game needs. There’s also a lot of “lore” that can be found in tablets hidden in chests, for those who are interested in knowing more about the Arcadians, an ancient civilization that once conquered the island and mysteriously disappeared.
And while I said that the people of Ditto don’t feel alive, I advise you to chat with them, as you may get a few laughs out of what they say. 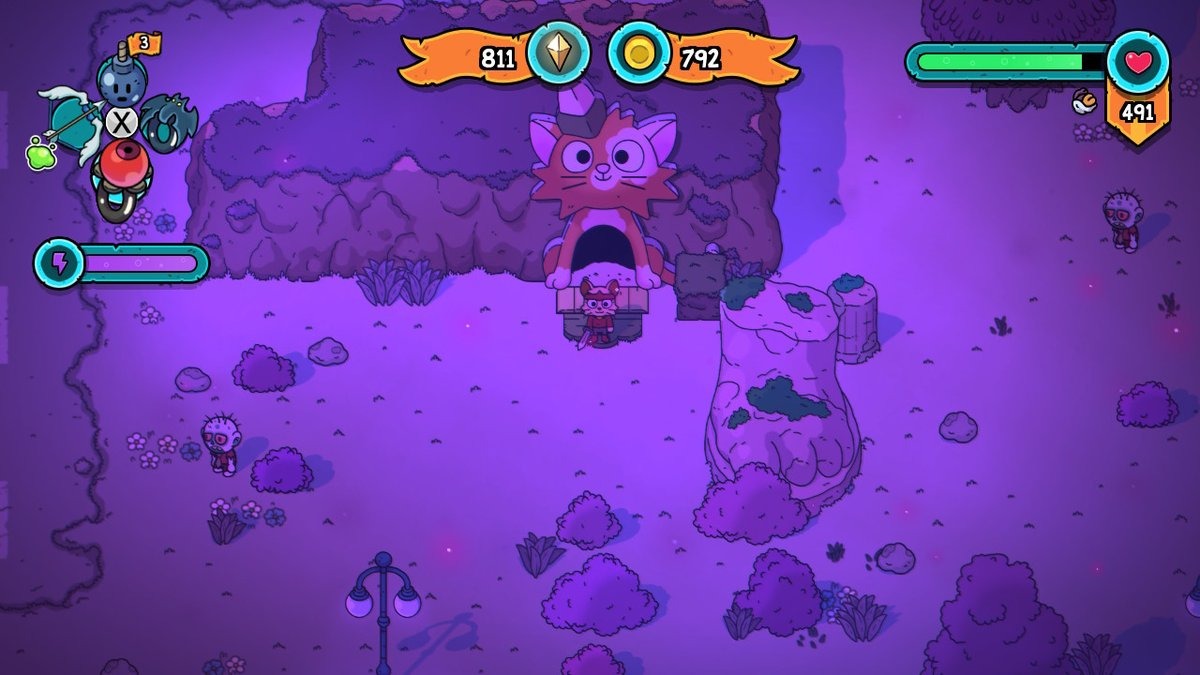 Watch out for anything that seems…out of place.

In conclusion, The Swords of Ditto: Mormo’s Curse appeals to hardcore and casual gamers alike, and while it definitely has its number of issues, it manages to come out as a pleasing experience that brings a lot of new twists in the roguelike genre.