[Review] Scheming Through The Zombie Apocalype: The Beginning – Nintendo Switch 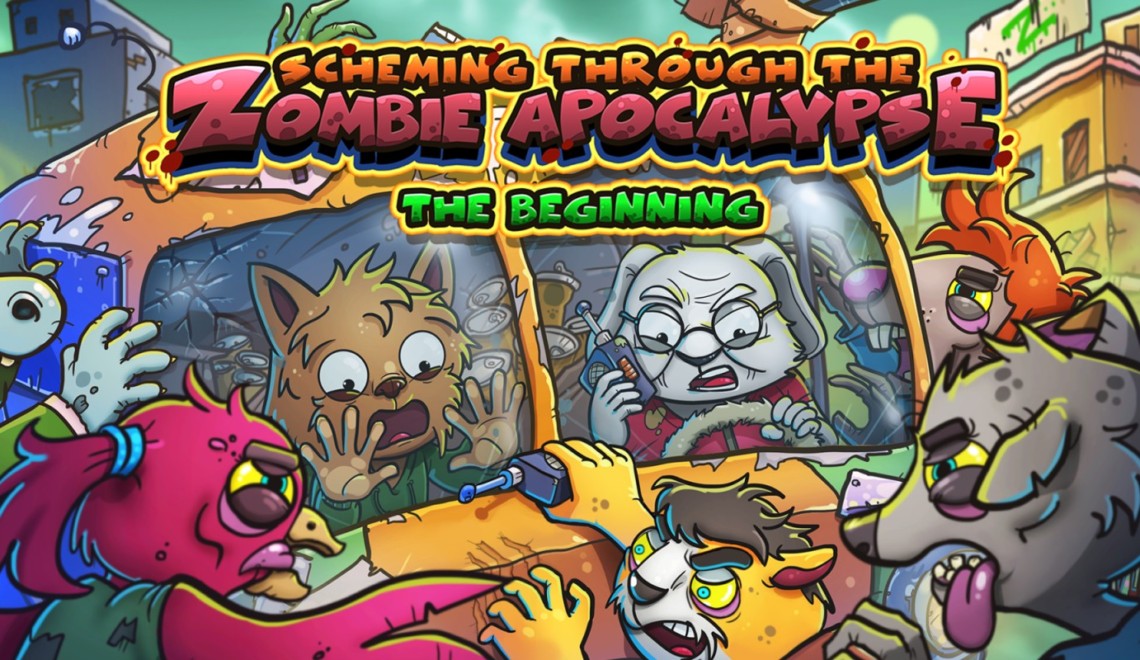 Scheming Through The Zombie Apocalypse: The Beginning

Scheming Through The Zombie Apocalypse: The Beginning is the first in a line of episodic adventure titles that follows Hank and Larry as they leave the safety of their apartment and try to survive the wasteland. They aren’t built for this, however, and so they use their cunning to convince other animals to do the looting for them, as they become “professional scavenger guides”. Get ready for a curse-filled journey as they attempt to gain entry into the illustrious Scavenger’s Guild and finally have a new safe place to call home. 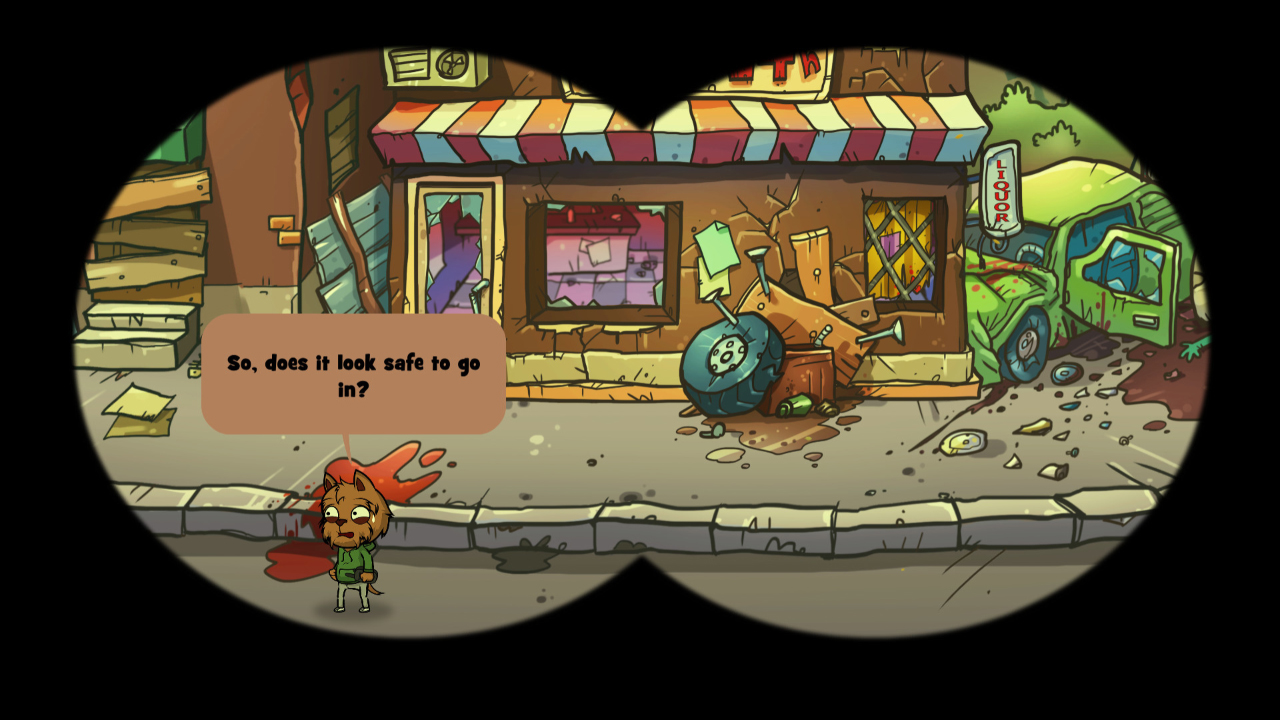 The game begins with Hank and Larry barricading themselves in an apartment with a year’s supply of food and drugs in order to wait out the zombie outbreak. After four months they run out of supplies and clearly had a good time whilst in the safety of said apartment. They decide they have to begin scavenging as they have nothing left to eat, so Hank keeps post in the “Mating Machine” (his van) that has been equipped with a military grade telescope for…reasons. With walkie-talkies he guides Larry into an abandoned store where they run into some shady characters. From here they learn of the Scavenger’s Guild and its tough entry requirements and know they must loot up the city in order to get enough to try to join the guild. Fighting back and forth with the bulls and running into camps with varying characters leads the dynamic duo through the apocalypse and onto greener pastures? You will have to play to find out.

As an adventure game at heart, the main portion of this title consists of pushing through the story. The game is set up in a similar manner to a point and click adventure but does not have any of those mechanics regardless of the vibe it gives off. The main mechanic of this one has you making dialogue choices with repercussions. Hank is a former award-winning salesman, and so you have to put your wit to the test to try to get the loot necessary to gain shelter. Beyond that you just move from camp to camp and make inventory management choices in order to trade or gamble your way up to the best loot possible after each scavenging excursion. This makes the game really light on features, and I was ready to be done as the game hit curtains close, but the story is intriguing and gave me a chuckle here and there even though it jumps right into animal “racism” puns and tons of swears as it’s baseline for comedy. There is also a portion where they discuss a potentially mentally challenged wombat that has some questionable lines it crosses. 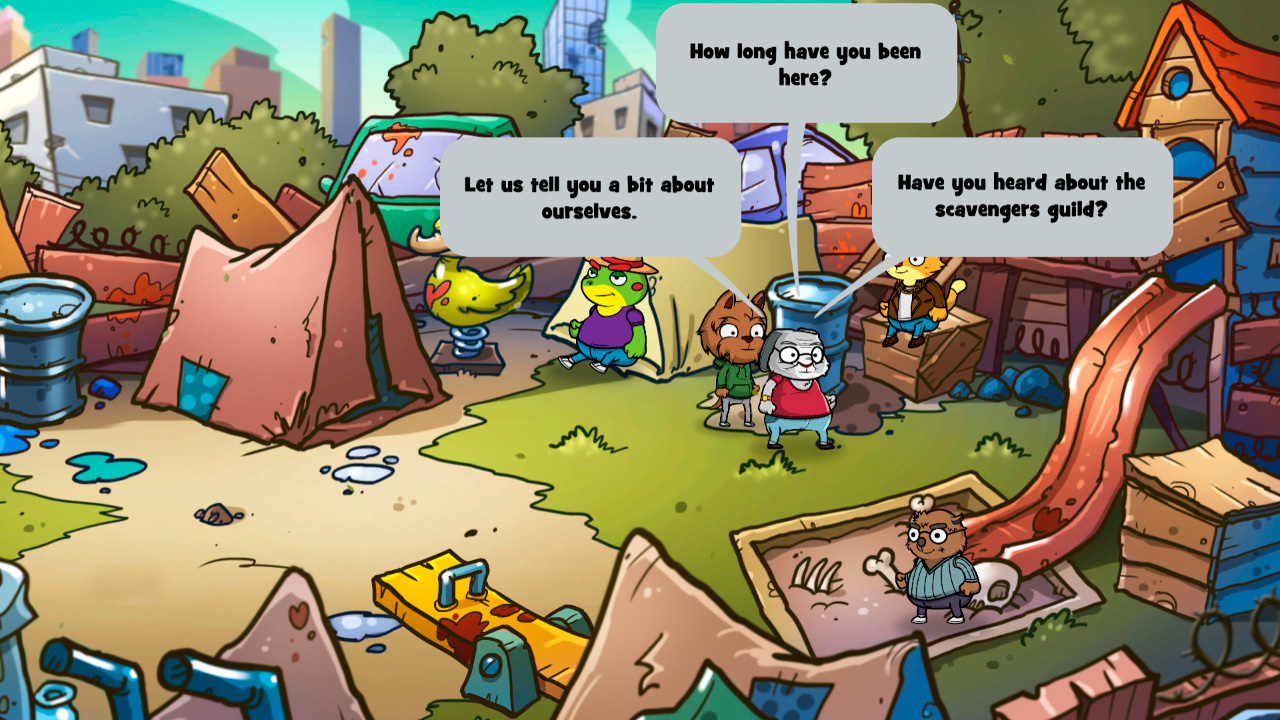 After talking your way into gaining a companion you run to one of the areas for looting and you send them in. As they look around you get a couple sets of items you can pluck into your inventory in a clunky UI system, and then each run comes with the same risk/reward choice you have to make. Whether it be skirting a zombie or entering a shady location you have to decide whether to tempt fate and send your newly acquired friend into harms way to risk the biscuit on extra loot. From there you have to make a 50/50 call as to how they solve the issue and hope you made the right choice. Then you must decide to drop some of your weaker loot for the top-notch loot, as you have a weight-based encumberment system for some reason. This whole system of looting seemed fairly unnecessary, as you could have just had the fun dialogue and banter and let the loot happen based on the choices, but nonetheless you have to choose what loot you want.

Then the only other way to increase your load is to enter the camps around the wasteland and barter or gamble with the animals. Gambling consists of just tossing an item out for bet and playing a basic game of dice to see who wins the lot. Trading allows you to upgrade the loot you have, as the character you are trading with has a way they value the items, and then there is a value dedicated to how the guild would perceive that item. So, you can drop some low guild valued items onto characters who have a higher value for it while grabbing whatever they have they don’t value that the guild will think is worth more. Trading is an interesting mechanic they have added in, but overall doesn’t end up meaning anything major and is a bit of a waste of time overall as the same conclusion happens when you finish the first episode of this game. 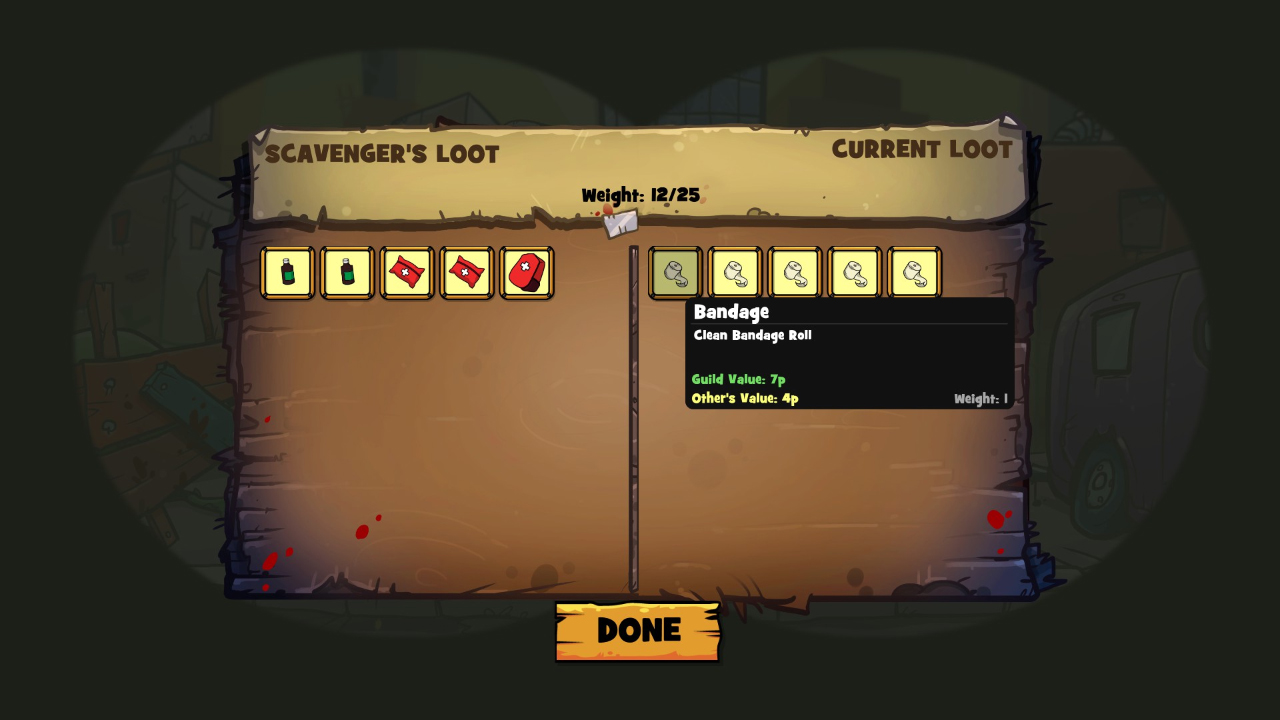 The art style has a comic book / cartoon feel and features really well drawn areas and characters that reminded me a bit of something like Rocko’s Modern Life. The biggest issue with the game is a small bug that I encountered where the game doesn’t like when you try to leave the game and then start back up where you were. When I arrived at the Scavenger’s Guild, I had to pause the game and do something and as I tried to maneuver the menu, I accidentally ended the game and returned to the main menu. No major issue as the game autosaves so I just jumped right back in. However, it took a couple of complete resets of the game to get past it freezing at this point and even pausing the game here caused it to not progress with the dialogue. Was a weird bug for sure, and the only one like it I encountered, but I had plowed through the whole game up until that point, so I am unsure if that’s something people who take more breaks will have to deal with. In the end I got through it without anything lost, and with only a little hassle, but nonetheless I thought it was worth mentioning. 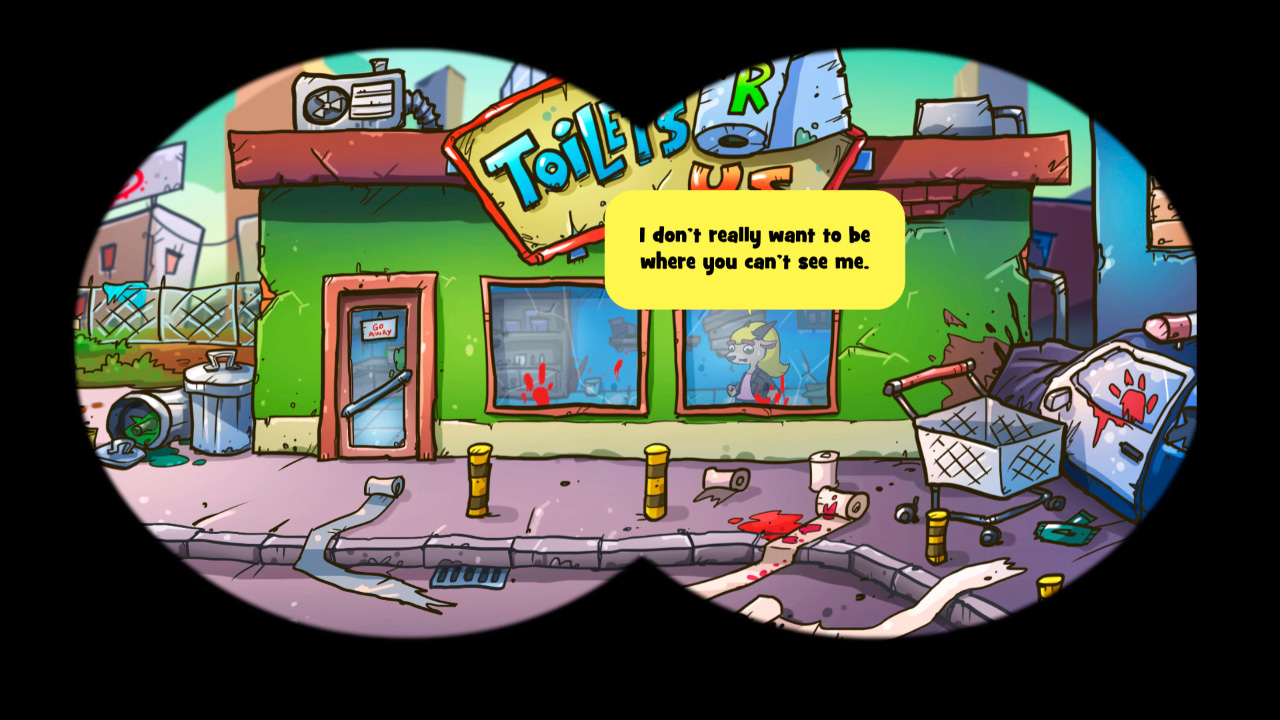 Overall, Scheming Through The Zombie Apocalypse is a decent adventure game with some funny quips here and there. They lean too heavily on being R-rated though, and some of the comedy even crosses some lines I wished it hadn’t. Beyond that the gameplay features you making choices with consequences, but then has an episodic conclusion where all the choices you made didn’t matter, as you get the same conclusion regardless of how much loot you gather. Maybe things pick up in the next episode, but I find that kind of hard to believe. Clunky UI issues, a pretty significant bug, and questionable mechanics hamper the game further to the point where it is hard to recommend to a broad audience.