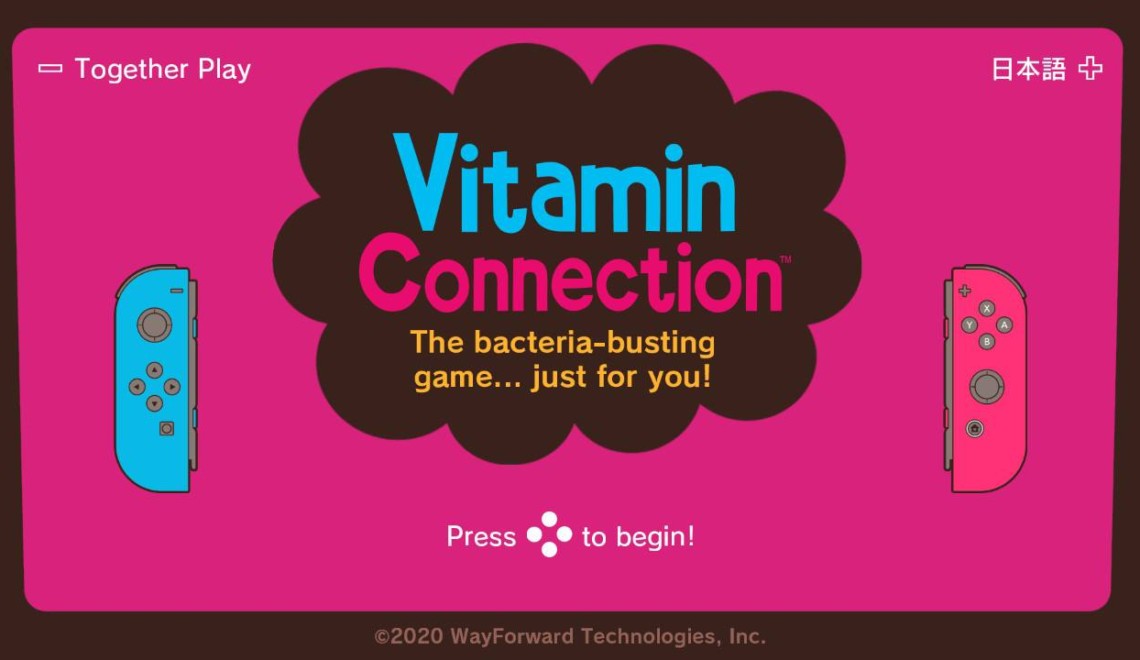 In all the years that I have played games, which is quite many of them, I’ve come across all sorts of plots. Some intensely detailed and well thought out, with others crammed in just trying to give purpose to the things you’re playing. All sorts of subject matter from the serious to the silly, but in all honesty I don’t think any one of the things I’ve played previously struck me the way Vitamin Connection on the Nintendo Switch did.

Why, you ask? Meet Vita-Boy and Mina-Girl, co-pilots on their Capsule Ship. Their purpose? To insert themselves into an infected host and fight off the bad germs and pathogens inside. It’s a cute premise, further pushed on by the fact that you find yourself in the household of the Sable family helping the parents, children, and even the dog stay healthy.

To fight off the pathogens, you’ll need to find them though. As soon as you enter the body you’ll be navigating all around, trying to locate the specific “hot spots” where the three main pathogens will hold up and wreak havoc. You’ll know where these spots are, but you won’t know exactly how to get there so you’ll need to guide your ship along the way. 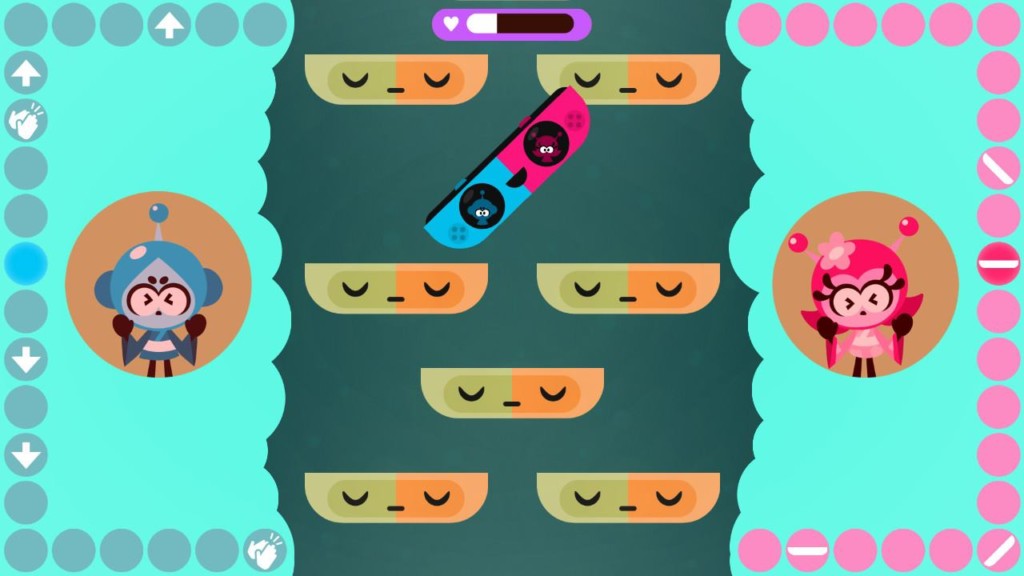 The ease of guiding your ship will depend entirely on whether you’re playing the game solo or with a friend. If you’re playing alone it’ll be pretty simple, using the left joystick to move, shoulder buttons to rotate, and the right stick to shoot your vitamin beam at enemies. However if you’re playing together, it can get a bit more complicated. One person will be holding the left joy-con vertically, in charge of ship movement and firing the beam, while the second player holds their joy-con horizontally and is in charge of aiming the beam and rotating the ship.

Your journey to the important areas of the host bodies will be contended by many obstacles and some of the enemy pathogens. Some of the obstacles are the path itself as it gets very narrow and windy, forcing you to find the best spots to rotate around corners. There’s also some barriers in your way in the wider areas, and the trick with these is they rotate with you, giving you a bit of a puzzle to solve on the fly too. Some barriers rotate the same direction you do, while others rotate the opposite direction, and the level never stops moving. Luckily if you hit one of these barriers or the outside edge of your pathway, you’ll only take small bits of damage that are easily replaced.

Once you get to the necessary regions, the game takes more of a mini-game approach. You’ll be tasked with completing one of a variety of challenges in order to best and eradicate the pathogen you’ve reached. These can be things like guiding your pair across a wire roller coaster without touching anything, or dancing and following a pattern of moves that will increase in difficulty. Once you complete this mini-game, you’ll be back in the host body to find the next area, or passing on to the next host you need to help. 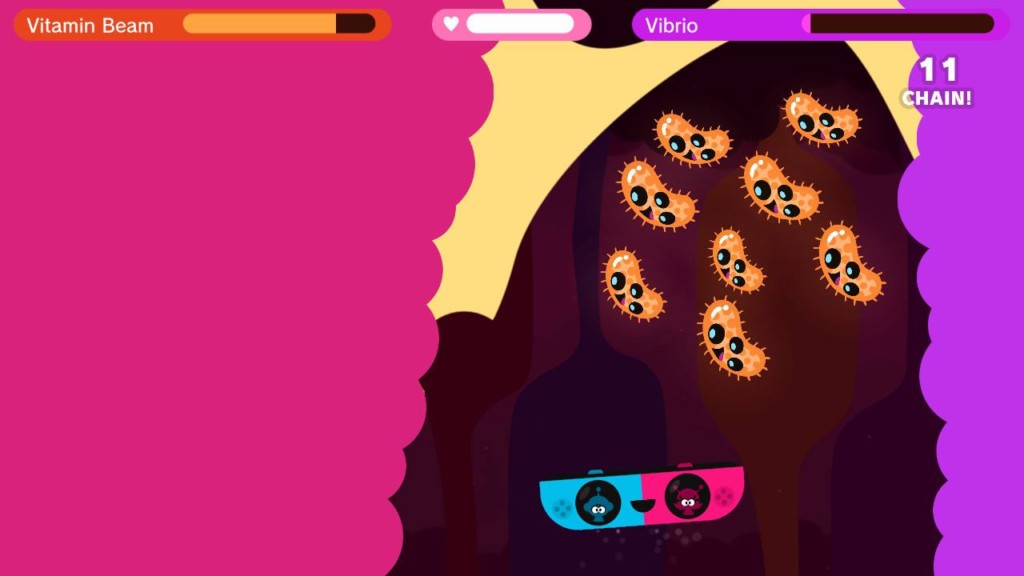 Normally, I’m not personally a fan of most games that rely on mini-games for the core of their gameplay. In the case of Vitamin Connection though I was ecstatic they were there. Outside of these small games, the experience isn’t all that entertaining, even if you’re playing with another person. The enemy encounters and barrier puzzles present some engaging instances, but the rhythm of these doesn’t always flow the best. More than a handful of times the game picked up speed on it’s own and I found myself knocking into multiple barriers before having enough of a chance to prepare.

These mini games are a blast to play, and to make it even better, you can unlock them to play without having to go through the core experience repeatedly. There’s a separate area on the menu just for these mini games. Initially only a few are unlocked, so you will have to play through the main game to get access to all of these, but it is very much worth it.

Vitamin Connection is a fun game, and its much more enjoyable with another person. Whether you’re trying to cooperate or intentionally sabotage one another you’ll have pretty much the same outcome playing this together. While the mini-games are the bigger pull for this one, the main game itself self is still pretty enjoyable, it just begins to feel stale after you shake up with some of the other things you can do. So hop aboard your pill ship and go save the Sable family and their dog! 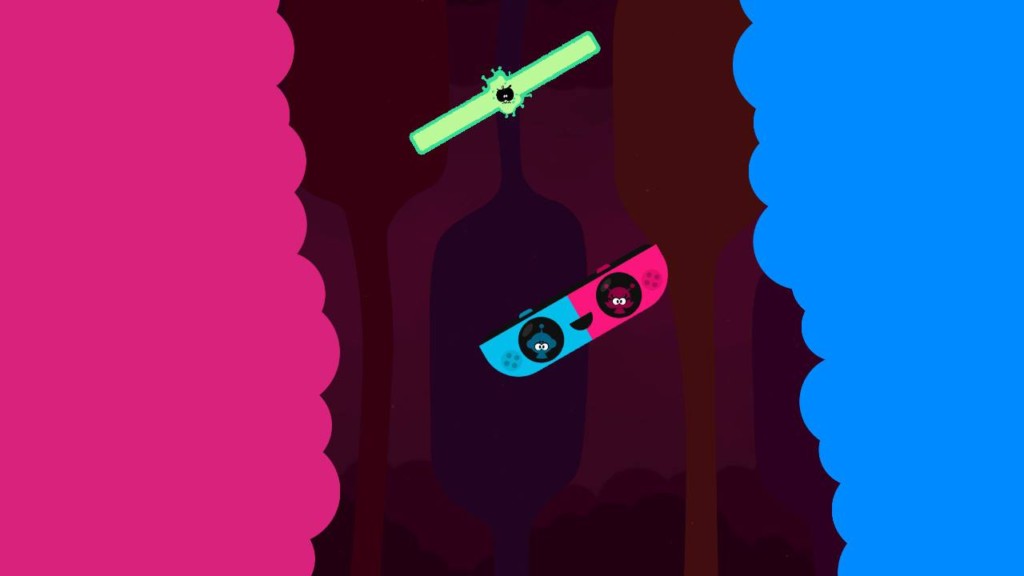