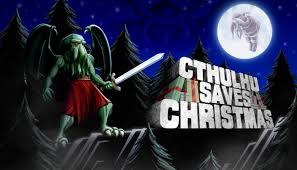 Many who know me personally would argue that I have the qualities of a Grinch, if you will. In earnest however, I would argue that my displeasure in all things “Christmas” oriented is far stronger than a Grinch or scrooge can muster. This may be the very reason why I enjoyed playing as the master of insanity himself, Cthulhu, as he is vexed with the responsibility of saving Santa Claus (and Christmas) in turn.

As the game begins with banter between the dark lord Cthulhu and the Narrator, showing obvious annoyance from the tentacle-faced fiend almost immediately. He realizes something is amiss as his powers have been tremendously diminished. He then sets out into the world to discover what might be causing that disturbance.

Shortly after venturing out into snow capped pinnacles of pain, the player is introduced to Crystal. She is the merry and bright granddaughter of Ol’ Saint Nick. She explains that Cthulhu’s power has declined due to Santa Claus’s odd disappearance. She endeavors the aid of the ancient one, and the adventure begins.

Soon you discover that the League of Christmas Evil have kidnapped Kris Kringle. Crystal persuades you into helping by promising you will always be on Santa’s nice list, and your powers will be restored. With the promise to return to his treacherous lifestyle, Cthulhu reluctantly agrees to help.

This game was far more than I expected and a lot more fun than it seems at first glance. You are joined by three other characters; Crystal, Baba Yaga-chan, and Belsnickel. (And yes I was a little disappointed that this Baba Yaga wasn’t John Wick…) Through the gameplay you will discover items, weapons and clothing that bolster the abilities and attacks of each character. These allow some customization into the character and their abilities while in battle.

This game’s role playing style is fairly standard. It is turn based, with a few interesting modifications. As skills are learned when the characters level up, you can select which skills meet your personal preferences. This makes each battle more unique as you choose what fits your playstyle. Depending on the move, some attacks and abilities may only be able to be used once per battle. This forces the player to plan a little more earlier in the game. There are items and abilities that can be used that refresh or restore the moves while in battle and are discovered later in the story. Items like potions can be used if and when needed. The most interesting addition to the game is the “unite” ability. Each character gains a charge, if you will, with each turn. Once the charge is full, the character’s next move is more powerful. When using a “unite” ability, you combine your power with another in the party which raises that abilities power. However, be forewarned, if the charge isn’t used when it is full, it is reset to 0.

After each boss is defeated, you are sent back to town where you are able to build R’lyehtionships with the towns folk. Each place you visit allows one day to pass, while also awarding an item that is usable on one of the four members of the party. The most interesting portion of this area are the conversations you have as Cthulhu with the rest of the random villagers. You can visit a movie theater, where you may hear about a shameless plug for Cosmic Star Heroine. You use your intellect to navigate chores at the Post Office or Soup Kitchen. And at the Assembly you share promises of threats to come with cultists. Every area you select adds to the story, and because the game moves forward after a certain amount of “days” have passed, this addition to the game adds to the overall replay-ability.

The gameplay is fairly simple, as is the art style. That is an observation, and not a complaint. The addition of a difficulty mode allows the player to change the difficulty at any point of the game, which was nice since I felt the standard mode was a little too painless for an RPG. The dialog and story were fun and while it may be about a Lovecraftian horror character, it was fairly lighthearted. Especially the discourse between the characters and the narrator. The music was a perfect blend of cheerful and concerning depending on the location and situation you found yourself in. Blending actual Christmas music chords into sounds you may hear in older retro RPGs was genius and well put together.

This has been one of my favorite games of the year. One even H.P. Lovecraft would be proud of. Learning there is a New Game Plus! mode only added to the thrill and excitement. The speed of the game never felt rushed, yet the story didn’t drag to a point where it started to feel repetitive. This indie game ranks high on my list of indies for the year and it would be negligent of me if I didn’t encourage every single gamer to try this game. Hurry and download this game before you incur the rage of Cthulhu himself.

*The Switch Effect was graciously provided this game code for review purposes.