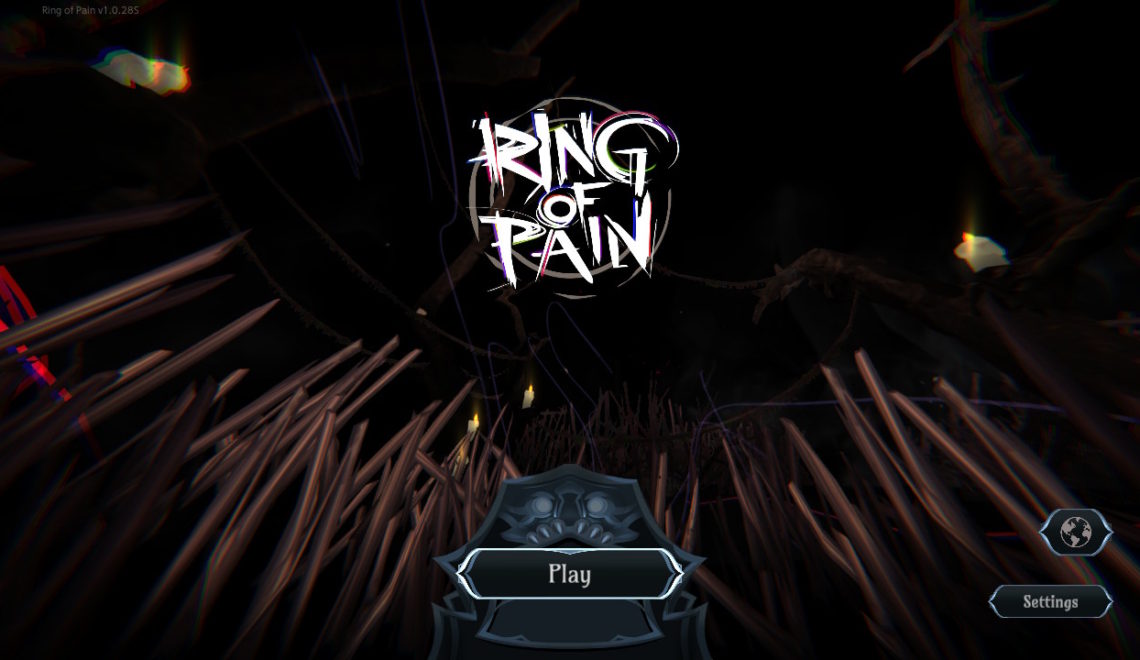 Upon first look, I was a bit concerned about the complexity of Ring of Pain, seeing as it was a card game. This was before I played it. Once I did start, I was pleasantly surprised by how simple and easy to get into the game was. However then came what I’d really classify the game as, I was kind of lost. It’s a card game, but it has RPG elements. From the creator’s own words though, it’s a card based roguelike, which I’d say fits perfectly. Ring of Pain is a apt title. Everything seems to be centered around circles with movement and advancement, and boy is it a hard game.

Move left, move right. Attack left, attack right. That’s the main gist of the gameplay. Easy to get into, incredibly simple and allowing for complete touch screen controls. If you’re familiar with rougelikes as a genre, the game being difficult will be of no surprise. You’ll go through randomized rooms, and you’ll find weapons, armor, items, etc… all in efforts to help you go through the staggering difficulty. Ring of Pain is no different when it comes to this, but the accessibility and simple nature of playing does wonders for the genre, as opposed to many other games in it that might scare off beginners.

Though it does seem obvious to fans of the genre, everything you pick up will greatly enhance your chances of surviving. Find a new weapon that can inflict poison on enemies or freeze them. Receive armor that allows you to half explosive damage. Pick up a shield that can raise your parry chances or boots to make you more stealthy. Earn spells or items that can swap out current stats. Even certain gems that give enhanced sight can be acquired. You can usually just find these, but on the occasion, and later in runs, almost always, you’ll need to spend souls, the games currency. Souls are received for slaying enemies, a risk vs. reward kind of action. Do you fight every monsters to receive more souls or just high tale it to the closest exit? Can you even evade the monsters? Luckily, if you take too much damage, you’ll find potions to heal you quite often, but you’ll also run into cursed potions. These have a chance to curse you instead of healing or raising stats, they cannot kill you fortunately. Again, risk taking damage when you’re already close to dying, and maybe get a nice heal out of it.

Majority of rooms you’ll go into are just regular combat rooms, fight enemies pick up whatever you find, proceed. You’ll go into an exit to a new room, usually telling you beforehand what kind you’ll go into. The mysterious owl who’ll either gift you a random item or just talk to you. A grave yard, full of graves for easy souls to earn, or if you’re unlucky curses. Rooms that are like stores that can either give you a free potion or let you purchase equipment with souls. Rooms with cute companion animals, who you can still kill for easy souls, if you’re a monster that is. Rooms to sacrifice your items or stats for other upgrades, which frankly I found not worth my time. Rooms that just surround you with an ambush of enemies, which if you’re not prepared, will end your run. There’s also a room just for asking questions into a void to get vague answers.

So having good stats or equipment can greatly help, but playing smart can do you even better. You’ll run into monsters who explode, while normally you should probably avoid them as explosions do massive damage, you can use this to your advantage. Say you have a monster with a lot of health on the right and the one about to explode on the left. Your weapon may not do too much damage to the monster, but that explosion can and will. Evade to the right to keep the monster between you and the explosion, even better if there’s more explosive enemies as you leave a big chain. Or even better, if you have an item that can nullify explosions, just attack the threat outright and watch it wreck havoc. Mixing clever planning with good equipment will surely help you out, but as is most roguelikes, it’s probably going to be RNG on your side or not.

The game is incredibly ominous and mysterious, which is a new one for me for a card game, but I like it. You’re not told much going in, and attempting to learn more often doesn’t tell you anything, but gets another question directed back at you. The music is mostly atmospheric and never tries to be too bombastic or loud, it fits well. If there was a flaw against how the game presents itself, it’s possible the lack of any true animations outside of environments, but considering it is a card game, it’s not too surprising.

Despite the fact I’m awful and roguelikes, and to be honest, pretty bad at this game, I could not stop playing. If I died, which the quickest was literally at the second monster, I would restart and make another attempt. It was addicting, I constantly was trying to get further and further, not out of obligation to myself to beat the game, but because I was enjoying myself. It doesn’t help the game logs what cards you find and I wanted a full collection.