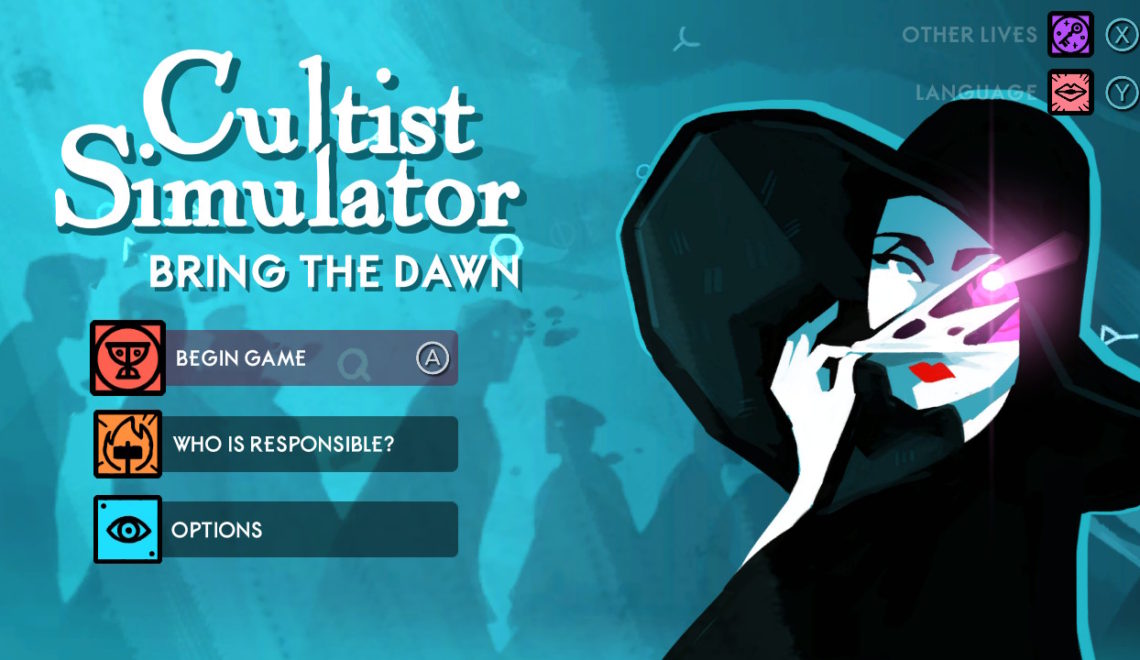 I don’t have any kids myself, but I do have two young nephews. The older nephew likes to play with blocks; he likes making tall stacks, wide walls, or whatever. The little dude just likes building. His younger brother likes to play with him; but his idea of playing blocks is randomly deciding it’s time to run full speed into whatever the older one builds, knocking everything all over the floor. The older one gets upset, and huffs and puffs and cries, but then he starts from scratch, rebuilding his tower block by block. And then the younger one invariably knocks it over again. Rinse, repeat. This is a pretty good metaphor for playing Cultist Simulator. It’s a card-based, narrative-building game that boasts an infinitely intriguing gameplay mechanic that is ultimately undermined by its insistence on starting from scratch with every new life.

First Impressions Are Hard to Break

Sometimes you just know immediately that a game is absolutely not for you, and that was my first impression of Cultist Simulator. After I picked a background for my character, my inaugural life lasted all of ten minutes, and honest to God if I wasn’t reviewing the darn thing I’d have walked away then and there. There’s no tutorial, but some actions are labelled with the right buttons to press to activate them, and that’s much as the game does to teach players the controls – or some of the controls, at least. At first I just clicked on cards and sometimes they’d go to an empty slot on the side of the screen and sometimes they wouldn’t do anything.

Shortly thereafter I noticed that icons across the bottom of the screen represented different actions I could take, which happens whenever cards are assigned to that action. I’d wait for a timer to fill before the action was complete and got my rewards. But some of the cards themselves had timers on them; they’d disappear if I couldn’t figure out how or where to use them before the timer was up. Before long the game told me I died of despair. I had no idea what that was, why it happened, or if there was any way to address it.

My second life gave me three different options for my legacy – the game’s term for your character’s background. It determines what cards you start with and what to focus on in the game’s early goings. I had a little bit better grasp of the basics, but the cards were just automatically assigning themselves to the first open spot that could use them. I realized I could use either the touchscreen or hold the A button down to drag cards, so I didn’t have to just kind of hope that the cards would go where I wanted them to after all. This was my first indication that this game was clearly developed for a PC with a mouse and keyboard input, and had not been smoothly optimized for console.

Then I opened the menu and saw that there was a button layout guide and even a small beginner’s guide that described some of the possible actions I could take, but not how to get there. I realized I could pause the game, so I wasn’t as hard up against the timers as I suspected. This is sort of an embarrassing admission, because the pause symbol is right there in the corner of the screen, labelled with the button you need to hit. I had just been so absorbed in reading the cards and action results that I missed it the first time through. I also realized there was more than one line of icons that could be displayed across the bottom of the screen. There’s one line for actions, like studying tome cards or talking to character cards, and a second line for passive effects, such as the aforementioned despair, or a potential adversary looking for clues. This is easily the Switch port’s biggest misstep, as the information on the second line doesn’t appear to be separated and hidden on the PC version. Hiding away the area that houses the icons that let players know that they’re about to die is just a poor design choice.

Nonetheless, I began to be more impressed at the breadth of card types – they could be ideas, people, places, feelings, inspirations, knowledge, artifacts, or a dozen other things. Exploring their many possibilities when combined properly became a fascinating mechanic that seemed impossibly expansive and alluring. Completing actions and unlocking and inspecting new cards brought with it intriguing snippets of lore. I was discovering small bits of larger secrets, and piecing together new cards in the hopes of gleaning a little more. The engrossing prose tantalized me with something deeper – if only I could make it just a few steps farther.

The feeling of exhilaration that existed when I discovered the possibilities inherent in the game lasted for a few playthroughs. After restarting from scratch a few times, however, I began to notice the cracks in the game’s foundation. The random nature of afflictions made them minorly annoying to counter at first, and shortly after it felt more like a chore. Most adverse effects pull in cards automatically, whether they’re the fuel or the cure, so they were hard to actively manage except by keeping a constant stock of certain cards – most of which existed on a timer. It was then that I realized I would be spending a lot of time grinding for cards that would probably disappear before I ever got a chance to use them. That’s in addition to all the grinding I had to do during a new run just to get back to where I was in the previous run.

And here we come to game’s biggest issue; it doesn’t do anything to ease the tedium of replaying through the early game stages. The better I had done on my last try, the more of a grind it became just to get back to where I had already been. Choosing a different starting legacy does very little to reduce this effect; in practice the most visible thing it changes is what cards you have available for the “work” action. In an action game, starting from level one can help you reinforce your strategies and hone your reflexes for playing the game. In a narrative-focused experience, it’s like a book where you have to read the first chapter six times just to read the second chapter once – and then start over again at chapter one a few more times before you can pass to chapter three. Eventually you’re not spending any time exploring what the cards have to offer; you’re just retracing your steps. It’s hard to maintain interest at that point.

Slowing to a Crawl

Further frustrating the experience is the fact that some action rewards are semi-randomized, meaning you may have to try a combo multiple times to get the card you want, or to even find out if that combo produces multiple results in the first place. Moreover, an action may yield a temporary randomized card, which needs to be combined with another temporary card that comes from randomized results. Then you’re just crossing your fingers that you’ll be lucky enough to get the right randomized, temporary cards at the same time. And you still have to grind out the cards you need for regular upkeep. You’ve just got to grind. Like, a lot. And remember, this isn’t active grinding, like fighting enemies in an action game. This is setting cards on a field and waiting for a timer to run down. It’s hardly what you’d call riveting.

And you do all of this in service of… well, it’s unclear. One of the strengths of an open narrative game like this is that it gives players complete control over the story’s direction. The drawback is that you really never know what it is exactly that you’re looking for until you get there. You’ll uncover rituals, explore new ideas, sway minds, and amass lots of resources. I’ve run through about ten lives at this point, and I still don’t really have any clue what it is that I’m working towards. There are rituals I’ve conducted, entities I’ve summoned, and adversaries I’ve thwarted, but none of that is the end. Heck, I don’t even know for sure if Cultist Simulator even has and endpoint – maybe it’s all about endurance. It’s hard to stay motivated without even a clue about what any of the goals you might be able to choose from can be.

A Board of Cards

Cultist Simulator doesn’t do itself a ton of favors visually, either. It’s not ugly, by any means; the card illustrations are simple but attractively stylized, and more importantly the text is readable – which in my experience is not always the case with games ported from the PC, so I don’t want to understate how much I appreciate that. Ultimately, though, the game is just some cards and icons on a blue background. It gets boring to look at after a while, especially if you’re in the process of recovering lost progress after a game over. I do have a special shout out for the music crew, however. The soundtrack is as smooth as it is mysterious. Once you hit the grind-heavy phases of the game, it becomes the sole source of atmosphere or emotion.

I respect the ideas behind Cultist Simulator a great deal. It’s an interesting experiment in gameplay exploration that, like my nephew, I would keep restarting after all my hard work had been knocked down. The thing is, though, that eventually the kid realizes it’s just not worth the aggravation and decides he’d be better off playing literally anything else. It didn’t take me too many runs through Cultist Simulator to come to the same conclusion. This is not a game you play; it is a ritual to which you must commit yourself fully. Its only reward is that maybe you now have enough information to guess what the next step in the ritual might be – but then you have to grind your way back to figure out if you’re right. While I generally enjoy games that encourage player exploration, the increasingly harsh grind, randomized elements, and utter lack of direction ultimately make Cultist Simulator a chore to explore for all but the most obsessive masochists in gaming.