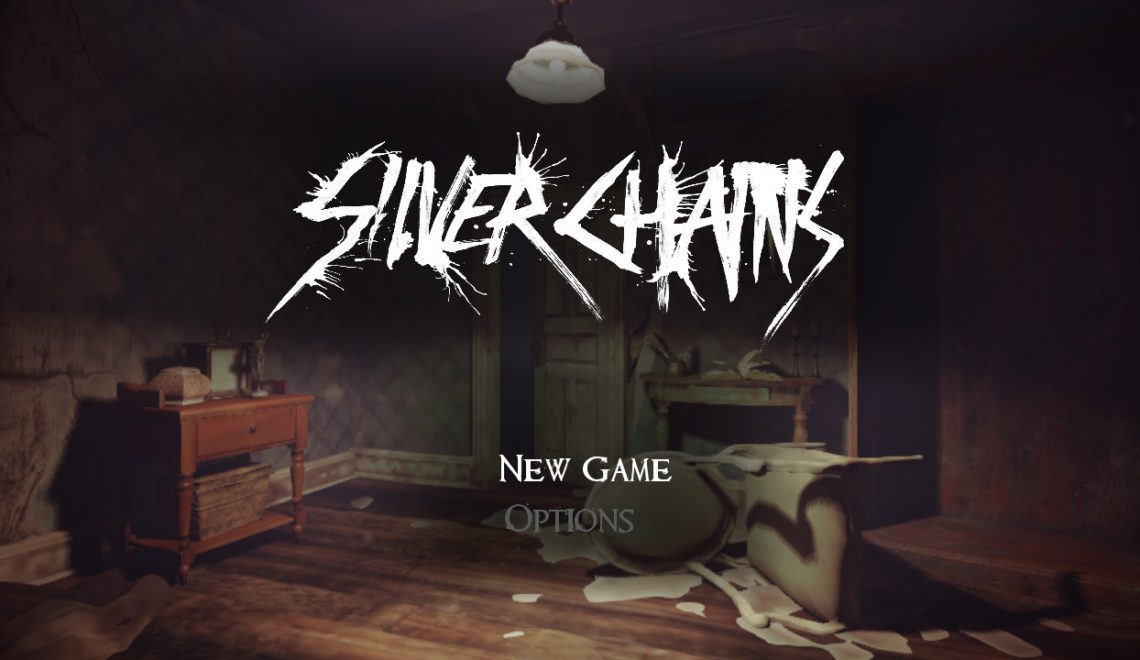 I’m not the world’s biggest fan of the horror genre. I mean, sure, I’ll spend all day with a Resident Evil, but that’s about as far as I go with it. Today’s game, Silver Chains for the Nintendo Switch, doesn’t do much to change my opinion of the genre. It boasts some excellent atmospheric sound design but little else to set it apart from other first-person, puzzle-based, horror adventures. Now it’s not that Silver Chains is out-and-out terrible, it just doesn’t have much in the way of innovation. And if you’re not breaking new ground, you definitely need to make a game with more polish than what is on display here. Anyway, enough with the vague introductory statements, let’s get to some details.

Players take on the role of Peter, a young man from England, probably, judging by his accent. The game opens with a car crash, after which Pete stumbles down the driveway of a nearby mansion and passes out. Sharp-eyed players will notice an ominous shadow in one of the windows on their approach. When Peter wakes up, he finds himself in a bedroom near a room with dismembered doll parts hanging from the ceiling. Everything seems fine, in other words (eyeroll.gif). Using only his wits, a few found tools, and clues scattered about the mansion, Peter has to unravel the mysteries of the mansion’s ghost children, the murderous phantasm known as the Mother, and how it all connects to his own clouded past.

As horror stories go, it’s fairly standard; haunted mansion, ghosts, and creepy dolls. Check, check, and check. Much of the story is told in journal entries found planted around the house, with some additional insight added via Peter’s narration. There are plenty of plot twists, some of which players will figure out way before Peter seems to – or at least I did. I mean for real, Pete, why are we trusting anything a creepy, limbless doll communicating through an Ouija board is telling us? Have some sense. Still, the story is one of the game’s strongest elements. It moves along at a snappy pace as long as you can move steadily through the game’s puzzles, which isn’t too terribly difficult.

Unfortunately, Silver Chains’ gameplay is where things start to slide down to mediocrity. Moving around the mansion feels a little clunky, but considering the game’s action elements are so mild it’s not really an impediment. Mostly the only time you’ll need to move around quickly is when the Mother is chasing you, and that only seemed to happen at certain scripted moments. If you run and hide in a wardrobe, she leaves you alone – even if she was definitely in a position to see you enter the hiding spot. She ain’t too smart, this Mother. The rest of the time you’ll be able to move around the mansion at your leisure, with only a jump scare here or there to interrupt you. I suppose the slow pace of movement is supposed to enhance the game’s atmospheric elements, but for the most part it just made things feel more drawn out than tense.

The puzzles themselves aren’t really that tough to solve. Most of the time, you’ll find the solution to your problems directly spelled out in a note somewhere. If you need a special item to solve a puzzle, you’ll automatically use it if it’s in your inventory, so you don’t have to worry about figuring out what the right item to use is. The hardest part of most puzzles is how wonky the game’s item highlighting system is. Interactive items have a white dot near them – but only if you view or approach them from the right angle, making them easy to miss. Furthermore, the dot only switches to the interaction prompt if you approach it from the proper angles as well. I often had to dance around an object for a minute before I could actually open a door or pick up a note or whatever I was doing. It really broke the immersion and tension of the atmosphere whenever this happened, which was far too often.

The Chains May Be Silver, But The Sound Design Gets A Gold Medal

Graphically, Silver Chains isn’t much to write home about. It looks fine, certainly, although like a lot of Switch ports the graphics seem like a step below what is available on other platforms. The audio design of the game is of a very high quality, however. The voice acting performances are somewhat sparse throughout the game, but nonetheless are clearly delivered and well done. The soundtrack is creepy and atmospheric. Well-placed jolts of sound from bits of thunder, creaky furniture, or random wailing made for effective jump scares. I can’t praise the game’s audio enough for the heavy lifting it does in creating a truly creepy atmosphere, even when the gameplay fights against that purpose.

Chain Yourself To Something Else

Silver Chains has its good qualities, for sure. The story, while not especially original, is well-told and moves along at a nice pace. I can’t heap enough praise on the atmospheric audio design, which is the game’s best quality by far. Unfortunately, Silver Chains is a game, and games are ultimately judged for their gameplay. The puzzles are a little too simple to be very satisfying, and the mechanics of moving around and interacting with the environment are just too slow or wonky to spark much joy. And at around four hours and no branching storylines, it’s a bit short on both longevity and replayability. If you’re a big fan of atmospheric horror and you’re looking for a game without a huge time commitment, Silver Chains is a decent choice. For everyone else, this is probably a pass.