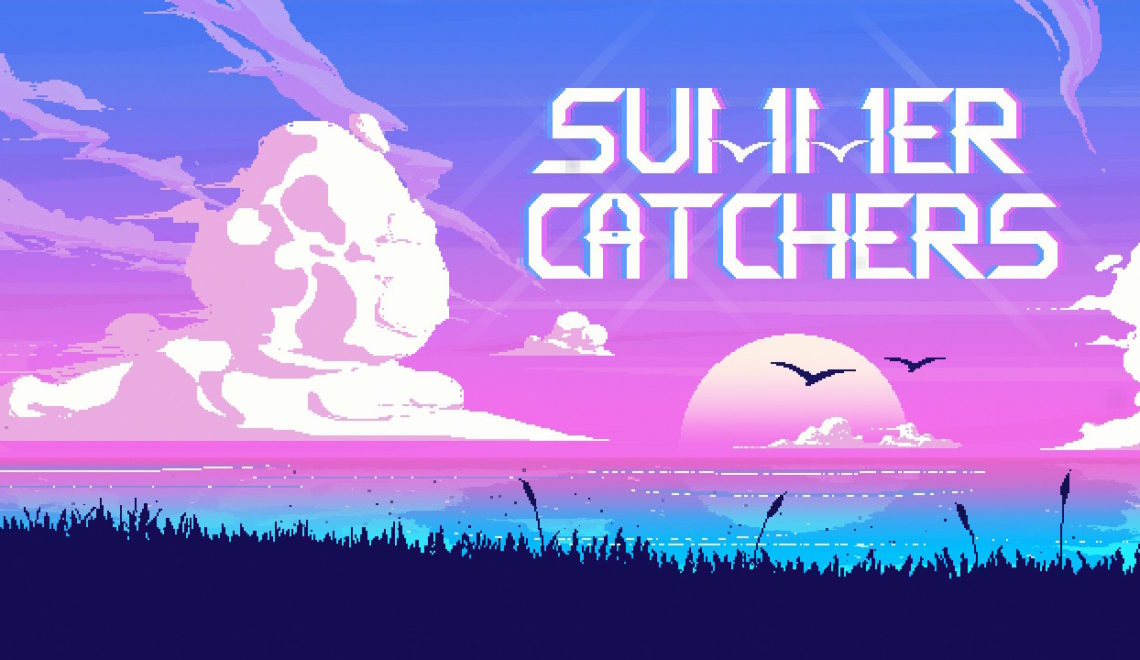 I can’t recall a game that I have more mixed feelings about than Summer Catchers for the Nintendo Switch. It’s an interesting take on the classic infinite runner with a cool visual aesthetic and a cute story. Players take the role of a young girl born in the freezing north who wants to see the ocean. So, a funny bear who is actually a wolf builds her a car out of wood so she can make the journey. Along the way she meets lots of memorable friends (and one duplicitous raven) as she journeys through nine distinct areas, completing quests and outrunning bosses. The game has several elements that should make it a charming, wonderful journey from start to finish. Unfortunately, an issue with the game’s basic mechanics conspires to make it as maddening as it is endearing.

Between races, players will find themselves at a base camp area where they can repair their car after runs. There is a shop where tools used during runs, skins for the girl, and new cart skins are available for purchase. Quests are selected at the call board. Each area has four quests that must be completed before facing the boss. A mailbox lets players correspond with characters from previous areas. Occasionally, players can speak with animals that can be recruited as pets or get hints about completing quests from the area’s inhabitants. Things are pretty straightforward overall in the base camp, which is good. It’s where a lot of the game’s story unfolds, and the simple, amusing script shines the brightest.

The infinite running portion of the game is where things start to break down, unfortunately. The basics are fine; players are on a cart, which barrels to the right of the screen automatically. Players can use tools like extra bumpers, a bounce to cause the car to jump, a rocket booster, or a propeller which allows levitation. Each tool is useful against certain obstacles during a run. For instance, a bumper can knock down totem poles that dot the track, or a rocket booster will allow the car to make it up a steep hill. Overall uses of these tools are limited to however many were purchased in the base camp. After a run ends (mostly in failure), players can use mushrooms collected during a run to buy more items and try again.

The runner portions of the game are broken up by various mini games unique to each location. For instance, in the spring forest there is a rhythm mini game, whereas in the plains area there is a 2D maze to explore. These mini games are fairly light, which is why they’re mini games and not full games, I guess, but they’re also usually pretty fun. And that’s good news, because the main gameplay has something of a fatal flaw.

At any given time, a selection of up to three tools are available to be used, and this is the game’s biggest issue. While most tools can deal with multiple obstacles, no tool can deal with every obstacle. If you are approaching a spike pit, for instance, and you don’t have a bounce or propeller in your active inventory, then you’re just going to have to take the hit. If you take damage three times, the race is over. You can shuffle one tool at a time and replace it with another tool from your bag, which helps slightly, except that it doesn’t really help at all the majority of the time. If the tool you shuffle out is replaced with another copy of the same tool, that doesn’t help. And the cooldown time is so long that once you activate the shuffle, you won’t be able to shuffle again for about two obstacles. If you shuffle and don’t get the tool you need, and then you don’t have the right tool for the next two obstacles, well, that’s pretty much game over.

It’s incredibly frustrating, because it essentially means that there is no good way to build an inventory. I tried to evenly divide my inventory based on the most common obstacles in each area, but that doesn’t really help against the random nature of drawing tools. Further frustrating the experience, some quests have unique items that enter the tool pool, adding another layer of frustration with the random draw system. If you need a flamethrower to unfreeze a frog, but you shuffle and pull another bumper, then you have to hope you have enough items to make it to another frog and that next time the flamethrower will be in your active inventory. It lengthens the game’s playtime while reducing fun, which is a terrible trade to make. Furthermore, it is an issue that persists at the same level of frustration across all of the game’s difficulty levels.

Sometimes It’s About The Journey

I hated how frustrated I would get with the gameplay, because Summer Catchers looks amazing. The pixel art vistas are absolutely stunning to behold whenever you get a chance to just sit back and take a look at them. To the game’s infinite credit, it would do just that on occasion. Sometimes, during the middle of a run, a small cutscene would occur, showcasing the gorgeous landscapes and featuring a wonderfully pixel-rendered sky whale or giant deer god or blinking mountain or something equally breathtaking. The graphics pair well with and adventurous, catchy soundtrack.

Doesn’t Quite Catch The Prize

I really, really, really want to love Summer Catchers. It looks beautiful and the gameplay is simple, smooth, and perfectly responsive. The random mechanics of tool availability just make it so damn frustrating, though. Most infinite runners have different lanes or a skill-based way to avoid obstacles without using power-ups or bonus items, but Summer Catchers sticks with its maddening insistence on running entirely through its tools. That insistence ultimately keeps the experience from being the fun, lighthearted, memorable journey it should be.