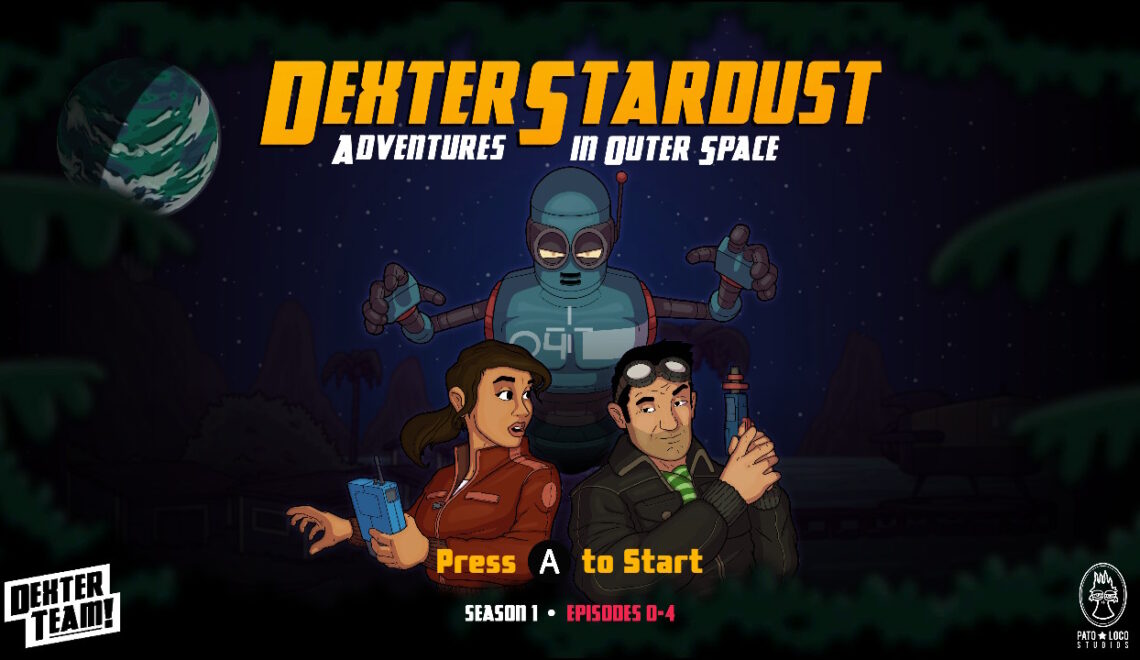 If you’re ready for Monkey Island in space, you’re ready for Dexter Stardust: Adventures in Outer Space. I mean, the stories don’t have a lot of parallels, but the tight adventure game mechanics and tongue-in-cheek approach to storytelling are dead on. And that’s what’s really important, right? Right.

Dexter Stardust and the Tacos From Mars

Dexter Stardust tells the story of, well, Dexter Stardust, a travelling salesman for his Uncle Jedo’s novelty item company. Their top-seller is dashboard hula girls. That’s not really relevant to the story at large, but it seems to come up a lot. Anyway, Dexter’s mom and dad died on earth after an attack by the planet Vrees, AKA Planet X, the tenth planet in the solar system. Dex and his best friend Aurora spend their days making sales and eating tacos, until one day a mysterious Vreesian robot – Unit 04 – saves Dexter’s life and tells him to find Venturia – which happens to be his supposedly late mother’s name. Dex and Aurora set off to find her, and hijinks ensue. It’s a fairly well-written story whose humor is more amusing than gut-busting, but the well-developed and likable characters make for a perfectly compelling and engaging story.

The game is broken into 5 episodes – although episode 0 is just a (very!) short tutorial so it’s more like 4.5 episodes. The good news is that each episode is tightly and satisfyingly paced – except episode 3. Episode 3 is overrun by puzzle and adventure elements and very light on moving the story forward. It’s far and away the longest episode, with multiple puzzles with multiple parts that feel like they exist just to pad the game’s run time. I don’t mind lots of puzzles, but backtracking across the same area that many times gets old pretty quick. The remaining episodes may be on the short side, but the pace at which both the puzzles and story move forward are far more satisfying.

Most crucially for its success, while it doesn’t stray from the basic gameplay formula for the genre, Dexter Stardust: Adventures in Outer Space has probably the smoothest controls I’ve encountered in a point and click adventure on the Switch. The cursor moves at a smooth and responsive pace, and the radial menu for selecting between actions is simple and intuitive. Using and combining items in your inventory is, too. I’ve played several point and clicks where that just isn’t the case and the game’s controls actively frustrate my ability to play the game, but Dexter Stardust deftly sidesteps that problem.

Not Much Negative About This Space

Dexter Stardust: Adventures in Outer Space utilizes a hand-drawn graphical style that looks great for the most part, but a little underwhelming at times. During the regular course of gameplay, the visuals are a little simplistic in terms of style, but still pack in plenty of detail. The graphics make great use of color to create a vibrant, living cartoony world. There are a few times – mostly in close-up shots of faces – where the art looks a little bit amateurish, like an old Flash game on Newgrounds. These shots aren’t common, however, so the game just looks great most of the time. The music has a sixties rock feel to it – reminiscent of the songs from the chase scenes in Scooby-Doo. I liked it – it was light and groovy, and worked well with the game’s mostly lighthearted tone. The game’s voice-acting was a little uneven but overall pretty good.

There are just so many reasons to recommend Dexter Stardust: Adventures in Outer Space. It has a good, amusing story populated with great, relatable characters. The game’s controls, while lacking any new ideas, are beyond rock-solid, and translate especially well to console – which many adventure games don’t. The visuals and music are fun and inviting. It has some drawbacks – mostly an uneven voice cast and a poor balance of gameplay and story in the third episode. Overall, however, this a game that adventure fans won’t want to miss!