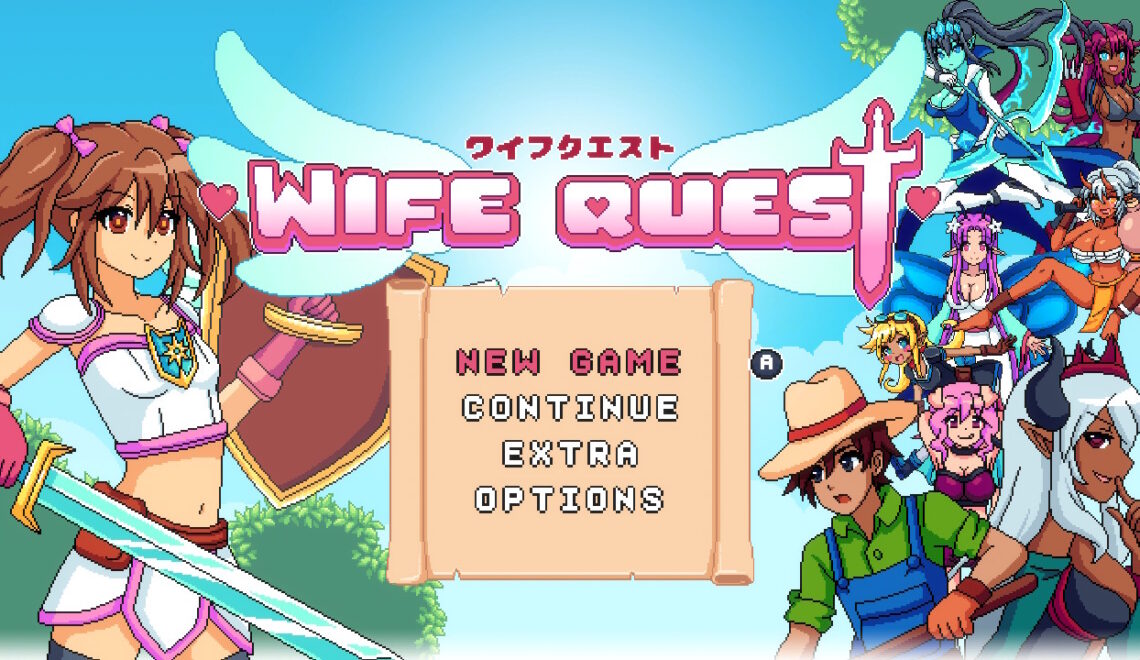 Now they’ve gone and done it. They’ve taken away your husband Fernando! And you’re gonna stand for that! Go track down all of those sexy, alluring monstergirls and get your husband back! What, did you expect a game called Wife Quest to be full of deep storytelling?

Wife Quest is a pixel based, 2D, action platformer. Feel free to say “another one?”, but as long as the game is fun who cares what genre it is or how derivative it is. Now at first, I thought that Wife Quest was a tad…flat in terms of gameplay On it’s surface, you just go into each level, slash at enemies, jump, open treasures, then fight the boss. However, upon beating the first boss and going back to the world map, I was shown how big the level actually can get. You see, you have counters for each level. Enemies, treasure chests, secret music, secret artwork. There’s even challenges for each level that you can do to unlock more stuff. On your first run, you’re definitely not going to 100% levels.

Collect as much gold as you can between levels, you can use it in the shop and you’re going to want to. In the shop, ran by a fiery, flirty dwarf, you can buy all sorts of upgrades and bonuses. Stronger sword slices, more HP, further range for your sword, a bag to hold potions, new outfits! There’s even music and more artwork to buy here, though honestly those should be a lower priority than the upgades, because the game might really be kicking your butt if you don’t get those upgrades. You can always grind and replay levels at the very least.

After beating a boss, you’ll be rewarded for a gift to go further and further on your quest. This comes in the form of an ability that the boss before used. Be it gliding, a dash, a shield, or an incredibly strong smash to break walls or defenses. Not only do these improve your chances of surviving and proceeding on your journey, but also can help get those collectables you lost! These abilities all use mana, so you’ll need to keep an eye on that. You can always upgrade it in the shop anyway.

Wife Quest is colorful and has some cute spritework. I’d definitely hope this is the case if you’re fighting exclusively monstergirls. Animations are just good enough, but there’s quite a few of them. You even get a finishing move you can use once you take out one of them. These are all saved in the gallery once performed too. Lots of animation reuse in these, and you’ll notice there’s a lot of recolors for enemies too.

While the gameplay from level to level itself feels a little standard, I feel that doesn’t detract from the overall package. It looks good, the music is good and I actually wanted to find the hidden songs, and there’s plenty of replayability in this little package. You might get turned off by the monstergirls depending on if you dig that or not, but if you do like them, you’ll love this.