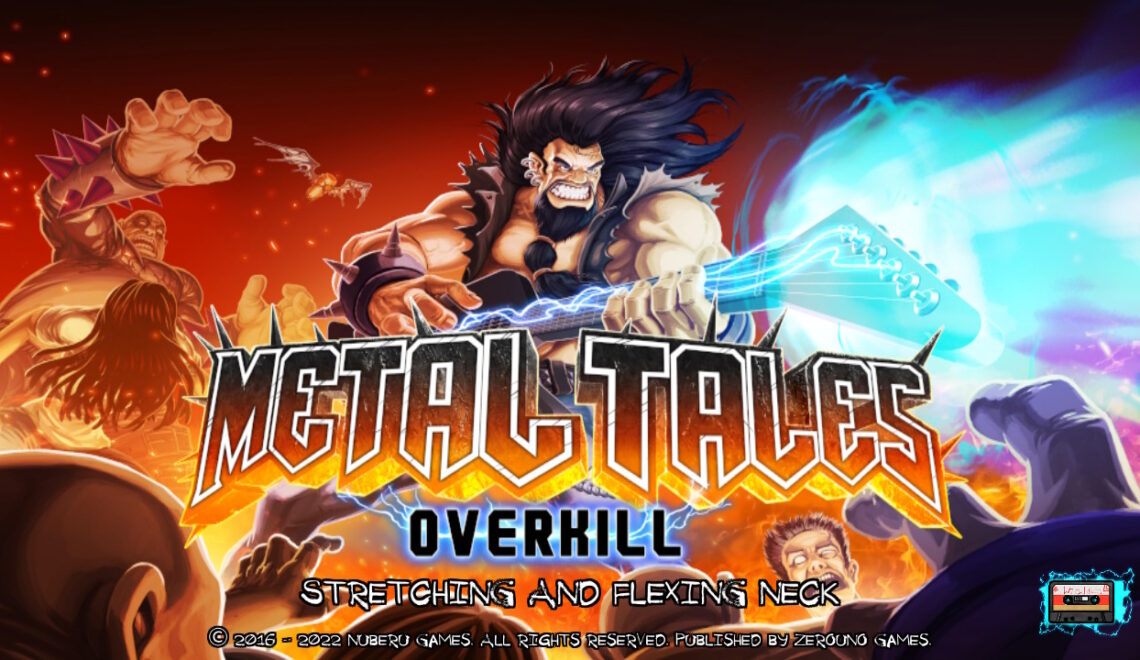 A roguelike, a twin stick shooter, all topped off with some killer music. The plot; guitar gods are all being possessed by The God Kuk. This is making all of the metalheads and fans into mindless zombies, music is suffering. This must be stopped!

So we’re off to a good start, so lets dig into the gameplay. We’ll select our character, of two to start, four when you get further into the game. Their stats can vary quite a bit, so just go for the character who fits your playstyle. Each character starts with a supply of a specific item too. Want to have some explosive speakers to star, then pick Axel, want an extra key to open a chest for some goodies, then pick Eve. Though this kinda stuff events out the longer you play.

You can just go straight to the boss, but in roguelike fashion, you’ll want to get into every room. Covering rooms, we have just a small handful. Standard battle rooms, just the average room full of enemies. You’ll occasionally find things to destroy for money and even a treasure chest, though those might be blocked by something you’ll need to destroy. Next is a challenge room, which has you fight waves and waves of enemies, with a reward each wave you defeat, at least if you can do it swiftly. Trap rooms, which are rooms with a great reward, but also full of traps to avoid. Treasure rooms with…treasure. Shops that let you buy upgrades, healing guitar picks, and items. Lastly, boss rooms.

This being a roguelike, you’ll feel weak, perhaps overwhelmed at first. You can and will get powerful however, and if you play your cards right, fast. On one of my runs, I was strong enough to literally hit a boss twice to take care of them. Everything was dying quickly. But how you ask? Collect those new strings for your guitar. Your choice of guitar can definitely assist in this too. There’s always the option for slow and strong, fast and weak. But with those new string, you can be fast AND strong. Giving new meaning to the term shred.

Runs will always be different, be it room layouts, or even those powerups. I’ve been in runs where I find a new one each time, surprising me. In fact, it took me half a dozen runs to acquire a powerup to speed me up. Sometimes I find different bosses in different orders. Sometimes luck is on your side, sometimes it isn’t, but that’s how roguelikes work. Thankfully…

After each run, you can purchase upgrades, permanent ones. If you do well, or complete the missions assigned to you, you’ll get currency for these. Sometimes it’s just adding some helpful randomization, sometimes it’s extra health. There’s even a nice, knee slide doge to get.

This should surprise absolutely nobody, but the music is some really great stuff, if you’re a metal fan at least. Lots and lots of songs, in stages, in boss fights, in menus. On top of everyone of course being credited, there’s detailed info on each of the featured bands in the game, in addition to who in the game is based off of them.

I can’t really say as much good to the graphics however. Art style wise, this is fine, but it looks rather poor otherwise, and the camera zooms for bosses showcase this. It makes me think the budget definitely went elsewhere, and to be honest I’m pretty fine with that.

Metal Tales: Overkill is a hard rocking time. By design, roguelikes are addictive, make them a twin stick shooter, give it a nice Metal edge, and I’m hooked.