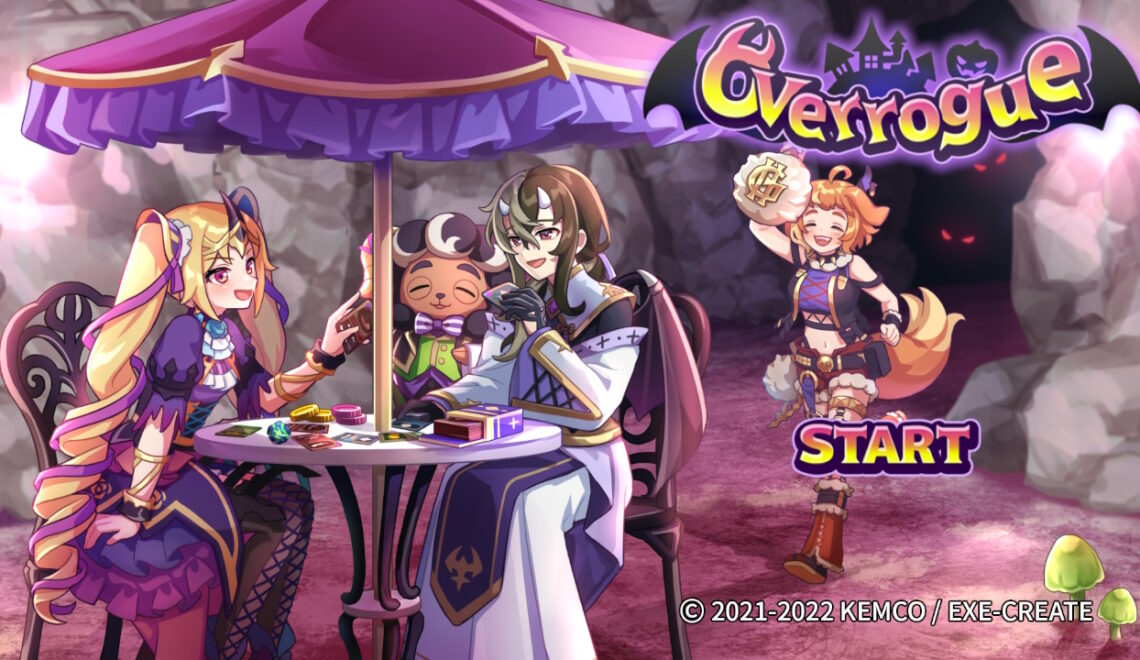 Ok, so I need to quickly get this out of the way. I am absolutely stunned that KEMCO as a publisher is still trucking. I grew up playing all of their games, then they just sorta poofed out. Or so I thought. This whole time they’ve been making more or less, exclusively mobile titles, RPGs to be precise. And now, we have Switch games by KEMCO. You know what, I think they’re doing a pretty good job along with developed EXE-CREATE at them too, and I really enjoyed my time with Overrogue.

Overrogue is the fun kind of RPG. It’s a roguelike, it’s a card game. I’m one of those people who always enjoyed card based videogames, never quite got the hate for them. The premise of Overrogue is that there’s to be a new Overlord, chosen by the Selection Battle. The 445th to be exact. For our lead Sael to (reluctantly) get there, he’ll need to build himself going through a set of Labyrinths. Collecting a set of six Sagan Crystals. Oh, also, he has to pay off a debt to this bratty Doll named Elize…who might want to be his wife.

Now, that might sound like a bit much. Like dungeon crawler almost? A little daunting, huh? Overrogue says to hell with that and makes what can be described as a streamlined kind of roguelike. There’s a lot of the randomness you’d expect, but this is more on an event to event in a straight line. Battles, shops, upgrades, rest stations, random chances. And yes, it all ends with a boss. Moving through the labyrinth can boost stats or give you new cards or items to aid you in your journey.

Outside of Labyrinths, Overrogue is a bit more traditional. You can explore, walk around, go into shops. Even pick up quests, the first of which being the task of helping an insect woman decide what to make for dinner. If you want some more cards, treasure, or even permanent upgrades in the form of stickers, you can do a little in game gambling with Sagan Gacha!

We have one thing getting in the way…we need followers and supporters to go into some of the Labyrinths. Luckily, early on you find one just sleeping in your ramshack house on the shelf. She wants to go into the Selection Battle too, but needs a base. You end up convincing her to join on your quest and she, very goofily joins you. Rolling balls up and down hills is funny, huhuh.

So lets discuss combat. As mentioned earlier it’s card based. Your actions are going to be limited by how many points you have to use. Early on it’s three. Cards can be 0, 1, 2, some real devastating cards are even at 3. Plan out each turn with this in mind. Sometimes it might be better to use a few 1 cards than a single 2 or 3 card. My favorite card I found early on was Unity Slash. Depending on how many cards you have with the word Slash in the name in your hand, it could go cheaper and cheaper to use. Maybe even free! If needed, you can swap your formation in battle, which will also take 1 point. Characters in back will auto heal.

This is a roguelike, so you’re gonna die a lot. No biggy, just keep at it. That’s the nature of this genre. The gameplay loop makes up for it at least. In the shop, there’s the “Secret Room”. This lets you use your currencies, like you would for Gacha to buy ways to make the game easier…or harder if you want. Even one to just remove the story entirely. I don’t recommend that one, since I do kinda like the characters.

Overrogue has a nice, cute artstyle. This translates to the spritework. I really like the sprites, especially for characters. Really brings me back to PSone RPGS. The whole game kinda has that vibe, music, sprites, it’s styling. Like somewhat of a budget RPG Maker title. Not in a bad way though. It’s an aesthetic, one I like. Theming wise, I really enjoy the the monster and demon themes. There’s jack-o-lanterns everywhere. This is the perfect Halloween season game.

In a way, I want to say this is the perfect budget way to get people to play roguelikes, it’s not exactly demanding from the player. If I had a big flaw to give, it’d be that I don’t exactly agree with Overrogue having legitmate, paid DLC. Mostly for the same stuff the Secret Room does. At the very least, it’s about $6 in total. Making this end up a $21 game. Could be worse. It doesn’t really spoil what is otherwise a game you should definitely play.