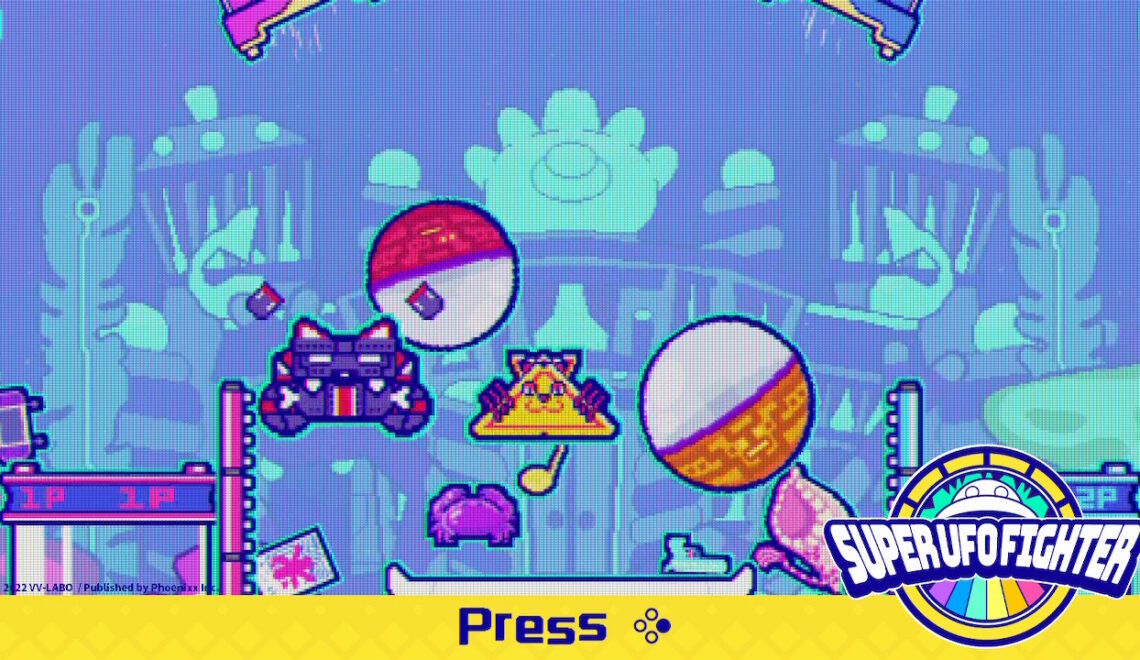 My first thought. Wow, this looks an awful lot like Part Time UFO, or one of those colorful sprite based games on the GBA. It’s not exactly an unfounded comparison either, Part Time UFO, Super UFO Fighter, both look remotely similar. But that’s the keyword, look.

See, this game actually seems more influenced by the UFO Catcher (claw machine) machines you might see in Japanese game centers. The premise to put it as simple as possible, is to grab goodies that you break out of capsules and drop them in your hole.

The twist? This is more like a sport, it’s competitive. You, a Shuforian, a UFO pilot need to get these specific, fantastic prizes into your hole to win. You suck them in with a Shwoop Beam, which all of the UFO have. Each also have a unique attack You’re going to want to get the smaller prizes into your hole as well. Both sides of the playing field have rising guards. The more on your side you drop, the lower your guard goes and the higher the enemy’s guard goes. This will make it easier for you to score a goal and get those goodies.

Each arena at first functions the same. You have your goals, your fences, and tubes that can send prizes to the other side of the arena. The difference is the gimmicks. A stage for a concert might have the arena go dark with spotlights illuminating the stage. Or you might have to deal with giant missiles or water spouts. This spices up what could otherwise be galactic tug of war. In some capsules you can even get powerups like a space helmet or stronger beams. Even ways to confuse the opponent. It can get real chaotic.

There’s a story mode in Super UFO Fighter! It’s short, not exactly challenging, but it’s cute and lets you learn about the quite literal colorful cast of characters. Scientists, queens, pop divas, just a Earthling with robot bunny ears, and so on. These are an odd bunch. The story mode is good for getting accustomed to each level and playstyle too, since like I mention earlier, each character has a unique offensive move to whack the opponent or break open capsules.

There’s multiplayer! And there’s online! If I had this game growing up, this would totally be the kind of game I’d bring to friend gaming hangouts. This is a great game to really get at it with. The powerups and stage gimmicks are just great. I’m glad this isn’t exclusively a local game too.

If you want some more replayability outside of just playing to play, there’s a museum for the music as well as every prize you acquire.

I adore the presentation of Super UFO Fighter. The soft sprites that come off like a premium game made by top developers on the GBA are just so good. This game is so full of life and character. The music is catchy and upbeat too. This is just such a joy to experience. I hate the airhorns for menu selections though. That definitely never gets old.

Super UFO Fighter both did and did not surprise me. I was pulled in when I saw the gorgeous artstyle, but I wasn’t sure I’d love it as much as I did. It’s not exactly anything deep or big, but it’s such a fun little sport/competitive game. Second game from publisher Phoenixx I’ve liked so far, keep it up!