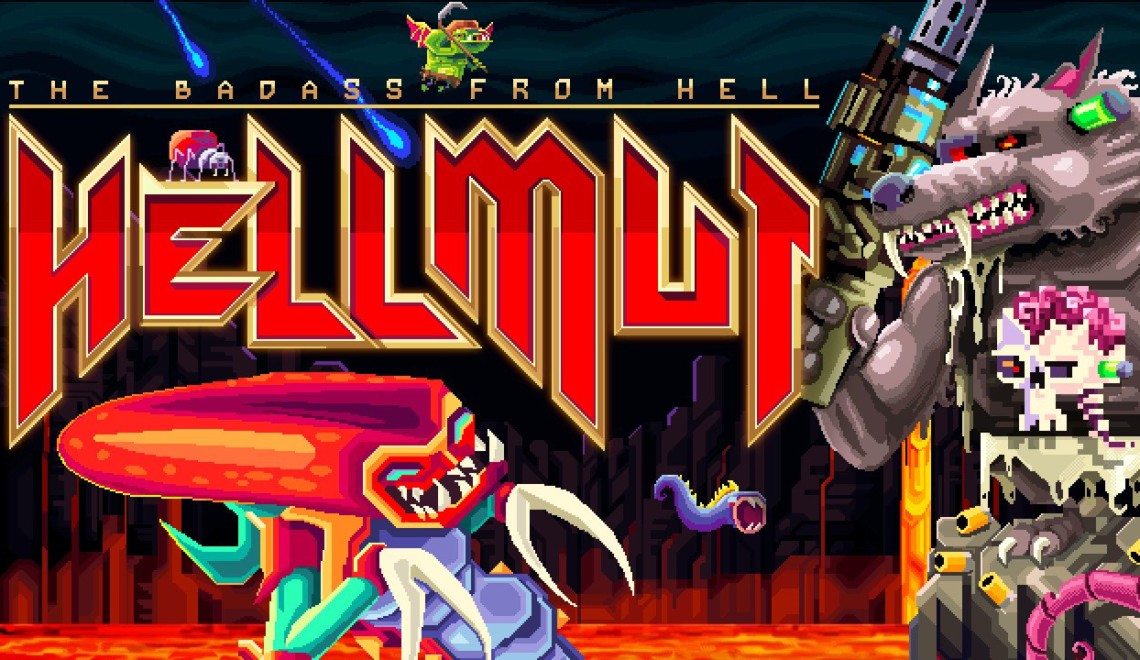 Unfortunately, the gates of the underworld have been opened, and what’s more unfortunate is you’ve become a snack for the demons that have come through. Well…the majority of you at least, but you’ve still got your head so that’s something…right? Hellmut : The Badass from Hell on the Nintendo Switch sends you on a demonic quest in order to obtain your body back. And…you know, saving the world and blah, blah, blah if that floats your boat too.

You’ll start things off in a lab-like area as a bouncing head, surrounded by immersion tanks. Inside of each tank is one of the available mutations that you can choose to play as. To start, you’ll only have two mutations to choose from : the Stitchmonster and the Rat King, but as you play the game and complete runs you’ll unlock others to fill the lab. Each mutation serves as a sort of costume for you to wear as you jump into the maze that is the castle and it’s levels. The reason I equate it to the wearing of a costume is that within the levels, you’ll have a chance to obtain other’s that you can freely switch to and from as you progress. They all come with their own weapon and special attack which are both specific to each mutation to offer different vibes as you play with each one.

As you play Hellmut you’ll be completing runs through a maze-like series of rooms within a castle. The runs will consist of a dozen levels, with each one generated as you load into it, while every third level is a boss arena. In the regular levels, the rooms will be randomly laid out and you’ll need to navigate to any combination of three symbols that will appear on every single level : a Shop, the End Portal, and the Tome of Ka-Ra.

The shop isn’t a location that is required to uncover and visit, but skipping it would be quite foolish. Here you’ll find upgrades you can purchase as far as weapons, armor, even medkits and resurrection stones to help you on your quest. All the items you’ll find within this shop are purchasable with the coins that you’ll get navigating the rooms, coins that are either hidden inside of furniture and containers or dropped by the enemies you kill. In addition to coins, your foes will also drop blue and pink soul gems which can be used as currency in a completely different manner, when you locate the Tome of Ka-Ra. The Tome is a direct connection to a giant, one-eyed demon whom you can summon if you have obtained a specific number of souls and wish to spend them. If you do, you’ll be transported to a different place where you’ll be subject to a quick trial. Here, you’ll need to kill all the enemies in a short series of rooms, all while racing against a clock. Succeed, and Ka-Ra will reward you with a gift which can be a super useful item like a resurrection stone, or the gift of another mutation.

Your final marker is the End Portal, and it’s just that. You’ll be fed into a room with no other way out, and a mass of enemies inside waiting to try and kill you. Once you lay waste to all of them, at least two portals will open up in the center of the room, possibly three. The center portal is your exit point, moving you on to the game’s next level. The other two are shortcuts back to the shop and the Tome of Ka-Ra, just in case you would like to make use of these locations, but didn’t have enough coins or soul gems to do so earlier.

If you can survive these levels, you’ll be treated to a boss fight in a contained room. These guys are big and they’re tough, so prepare to be tested mightily here. Survive everything, and you will permanently unlock the mutations gifted to you by Ka-Ra. Hellmut is an extremely fun game, beautifully combining elements of both bullet-hell and dungeon crawler. If you’ve played games like Enter the Gungeon and Binding of Isaac, you’ll feel right at home within this title. The levels are so much fun no matter which mutation you use, and each one really does feel different and independent from the others. The one thing about this game that feels a little bit off is maybe the soundtrack choice. With the name of the game and how it looks, I expected something along the lines of hard hitting rock or metal music, but instead the game’s soundtrack sounds more like a chip-tune orchestra. This isn’t a bad thing, by all means it isn’t, it’s just more unexpected than anything.

All in all, this is not a game to pass up. It’s fun, it’s challenging and will have it’s teeth sunk into you the moment you step into the castle. If you really like the game, you can grab a friend and give the game’s Gauntlet mode a try, where you’ll square off against endless waves of enemies. Or if you would like to race your friends equally (fans of a Racing+ mod for Binding of Isaac will be familiar with this one), Hellmut even has a tournament mode where you can enable the same seed of a run to be generated for everyone participating. No matter what way you chop it up, this is an amazing game and one you should absolutely rush to get in your library.