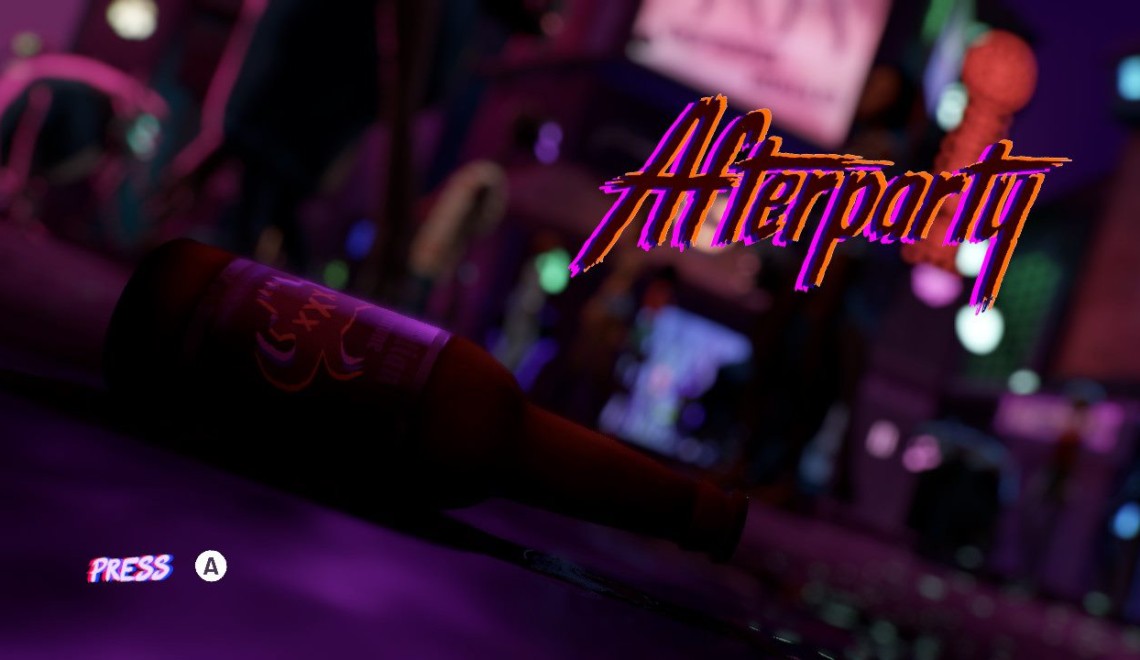 Narrative games are an interesting beast in the world of games. They can range from the more simplistic Visual Novel styled approach, all the way up to fully immersive 3D environments. Bur, regardless of the presentation, the goal is always the same. Focus on the story and the many choices you’ll have to make along the way to achieve any one of a number of outcomes. Afterparty on the Nintendo Switch falls right in the middle, as a beautiful side-scroller where the focus is on the conversations you have along the way.

Meet Milo and Lola, best friends attending what is supposed to be their last college party. Everything is going well, the music is grooving and conversations are flowing (albeit not the greatest), when out of nowhere demons come out from the shadows and the party dies. Or rather, Milo and Lola learn that they have died, and are now being slowly introduced to their new eternity in hell. Confused and unaware they had even died, the duo decide to play along as they get initiated into hell. They are processed and brought before the demon who will be revealing what their death situation was, as well as their eternal punishment for whatever sin they committed, the end of shift comes and they are left to wander Hell until the following morning. While they wander, they meet some interesting people and demons, and learn of an even more interesting loop hole : there’s a way out of Hell. What is it? They must out drink Satan, which shouldn’t be too difficult for a couple college kids, right?

To play Afterparty you only really need to worry about doing two things : walking and talking. It’s almost easier to think of it as a visual novel where you have to physically move your characters around. You’ll never encounter anything other than simple button interactions to do things such as get through doors or enter vehicles. The very few instances where you do need to do something more, such as in your entrance interview to Hell where you’re asked to shoot a disembodied head through a basketball hoop, a graphic will come up on the screen showing you the controls you need.

Your main source of gameplay however will be talking with everyone around you. Not every conversation is required, but how you are in each conversation will effect how your journey through Hell plays out. Each time you are prompted to participate, you’ll have one of two options for a response. The difference in these is pretty obvious. One can be a nice response while the other can be less polite, or it can be a matter of being prompted to ask one of two questions or choosing one of two reactions, which will set you down one path of conversations and close off another. However, your two main characters are college kids, and your goal is to out-drink Satan to get out of Hell. Obviously chugging some drinks comes into play through the game, and they actually play this directly into the conversational focus of the game. Whenever you have a full drink, at the top right of your screen will be a drink-meter with a full cup or glass. You can consume as often as you’d like, and you’ll know when it’s effecting you because the edges of your screen will become wavy and blurry.

Once you’ve achieved this, it is addressed in game that this relaxes your character and opens your mind to new possibilities. As a player, what this means is you get a third prompt option during conversations because, you know, you’ll be more relaxed and at risk of saying just anything. All these pieces of conversations will be ultimately important as they will reveal more about your characters, their history, why they’re in Hell in the first place, and eventually pit you drink-for-drink against the Devil himself.

Afterparty is a very relaxed game, and it’s one that’s quite fun as well. After having played a handful of visual novels recently, this sort of narrative adventure was a welcome change. While I’m a sucker for a good story, having a bit of a game to actually play is a much preferred way to experience that story, at least for me personally. The main benefit of this is instead of static image backgrounds, you get to walk and wander through beautiful areas that are alive with people and demons. If you enjoy a good story, and one that’ll make you laugh quite a bit along the way, this for sure one to die for.