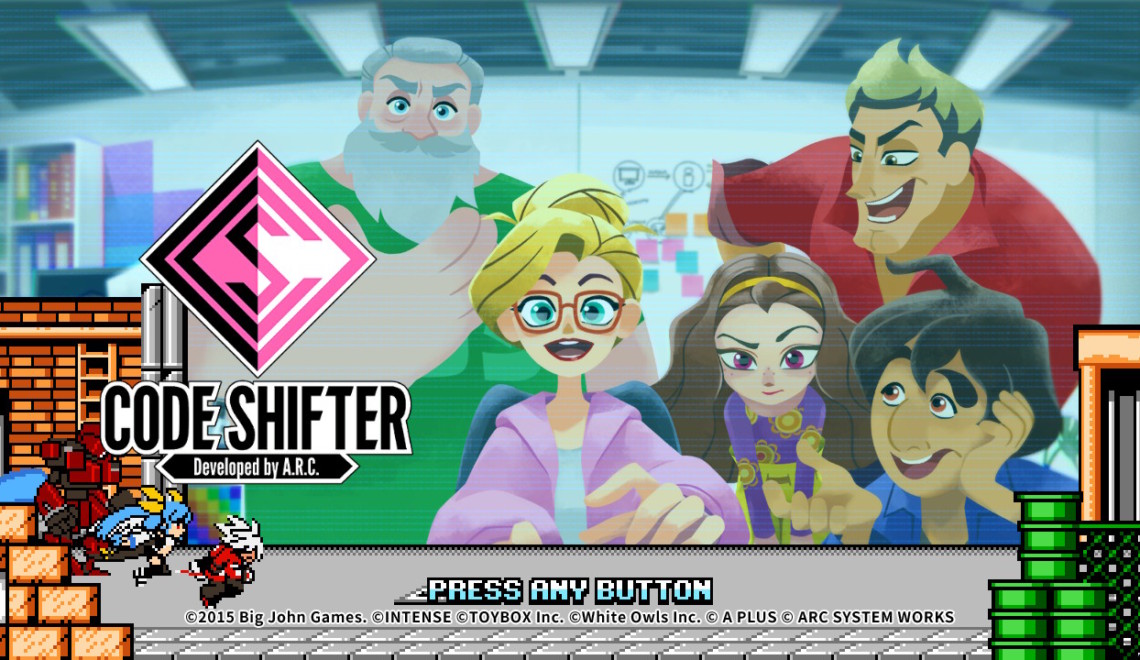 Who doesn’t love a good all-star jam video game? Certainly Land Ho! and Arc System Works understand the appeal, as shown by their new release Code Shifter for the Nintendo Switch. Code Shifter is a classic platformer that features 8-bit versions of characters from Arc System Works’ library of games including (but not limited to) Blazblue, Guilty Gear, River City Ransom, and Double Dragon. They’re all integrated in an original, seamless way that makes the game more fun for fans of those series without being exclusionary towards players that haven’t yet had the pleasure.

Stella works at Awesome Rainbow Corp with her diverse and cheery array of coworkers trying to make a game, but a mysterious virus sent by the even more mysterious hacker Ghost keeps rewriting code and generating bugs. She whips up a special debugging/antivirus software called – you guessed it – Code Shifter to eliminate both the bugs and viruses Ghost keeps generating. She moves through each of her coworkers’ computers one at a time smashing bugs and trying to unravel Ghost’s motives and identity through her use of Sera, her virtual avatar in Code Shifter. Along the way, there are a bunch of cutesy cutscenes that flesh out Stella’s coworkers and generally make for an amusing, cheerful, but ultimately fairly light story that still mostly satisfies when it’s over.

I did have one pretty big problem with the game’s story, however; it kind of makes light of developer crunch time, which is a fairly serious issue in the game development community. Stella and her friends are constantly working long hours for a management team that seems to care only about deadlines, and the programmers working at Awesome Rainbow Corp don’t seem to take it all that seriously, even as most of them collapse into sleep at their workstations multiple times throughout the story. It feels kind of gross to see Stella and her coworkers make themselves so happily complicit in their own exploitation when we can read about what it does to real people in the same situation. The game chalks it up to the enthusiasm of a small dev team, but honestly it’s a handling of the subject that doesn’t sit well with me. Perhaps I’m being oversensitive, but I feel strongly enough about it that I couldn’t just let it pass without comment.

Not a Paradigm Shifter, and That’s OK

Sera has all of the abilities you’d expect a platforming heroine to have; she can run, jump, and attack in a series of combos. Her base form can double-jump and perform a special attack that does increased damage at the cost of her health; I hardly ever used her specials because you get graded in part on how much health you lose during a level, but more on that later. As you finish the last level of each of your coworkers’ missions, you unlock a new costume for Sera that has a new special attack or ability of varying usefulness. Since, again, I never really used the specials, it was mostly a cosmetic change for me but the ability to jump higher provided by one of the costumes was incredibly useful at times.

What really makes the game cool is the ability to change into characters from Arc System Works’ library of games. Terminals placed throughout each level contain a character for Sera to transform into. In addition to being generally far more powerful than Sera, transformable heroes have different attributes that Sera can use to manipulate or navigate the environment in some way. Some characters have elemental attributes to their attacks and some gain special abilities related to their size. Characters with fire attacks can melt ice and smaller characters can squeeze through tiny passageways, for instance. It adds a neat little layer of depth to an otherwise straightforward platformer, but not too much; the heroes contained within the transformation terminals kind of tip off what you need to be looking out for. If you get a small character, for example, it means that there is probably a passageway or something nearby that you’ll need to use them for.

The action is fairly slow-paced for a platformer; the game doesn’t feel like it reacts as fast as I do, which gets frustrating because I know for a fact that I’m generally not that fast. Otherwise the difficulty level is generally pretty balanced. It gets harder the farther you go at a pretty natural pace, which is good. I have a hard time getting past the pace of the gameplay myself, however; maybe I’m just spoiled by the time I’ve spent lately with the Mega Man Zero/ZX Legacy Collection, but I prefer a little bit of a faster pace in my action platformers than what’s on display in Code Shifter. The game can slow down even farther when Sera is transformed into another character; some of the transformable heroes feel painfully slow, especially during boss fights. It’s not that it’s not fun, it just feels like things could be so much tighter with a quicker pace.

The Rich Get Richer

During the level, Sera can collect data bits, debug glitches, and defeat enemies (among other things) to build up her score. She gets graded at the end of each level, and every level except S Rank is basically pointless. Getting an S rank during missions rewards you with items you can equip to make Sera stronger. Limiting rewards to S rankings seems like a questionable choice; if you’re having trouble getting through a mission, you’re probably not going to get an S ranking. So, in essence, you only get the power-ups if you do well enough not to need any. I’d get it if they just reserved the best rewards for S rankings, but getting a power-up for a B or an A ranking would help players struggling with the harder levels by giving them a little bit of a boost.

Between missions, players take control of Stella so they can explore the Awesome Rainbow Corp office. Mostly it exists to flesh out Stella’s coworkers with small dialogue exchanges. Sometimes – very rarely, like once per set of coworker missions – they’ll give Stella an item she can equip to Sera. It’s nice getting these items, but the intermissions are mostly a chore for one main reason; Stella moves at a pace that would make a snail impatient. Towards the end of the game, I found myself skipping intermission interactions in favor of just going to the next level because I didn’t want to limp around the office with Stella for a minor bit of non-essential character development.

Probably the coolest aspect of the intermission sections is the ability to play Colorful Fighters, the game Stella and her coworkers are developing. It’s basically an 8-bit Smash Bros except with Arc System Works characters instead of Nintendo’s all-stars. You can unlock new fighters for the game in the EX missions that unlock as you get far enough into debugging each of Stella’s coworkers’ project folders. Colorful Fighters can be played either with a stock of lives or as a race to a certain point total, and more importantly, you can play it multiplayer with friends on your couch. It’s a fun game, but it suffers from the same slower pace as the main game.

Any Glitched-Out Graphics Are on Purpose

For the main game, the graphics remind me of a higher-end mobile game. Sera, her office, and the level backgrounds are rendered in a smooth, attractive, cartoony style that make the game look inviting and friendly from the word go. The transformable heroes, as well as the entirety of Colorful Fighters, are instead rendered in a really cool 8-bit aesthetic that, while visually very different from the main game, manages to look like it fits into the game world nonetheless. What’s even cooler is that the soundtrack changes depending on whether you’re just playing as Sera or one of the transformable heroes. Sera’s soundtrack is electronic, but in a modern way, whereas the Colorful Fighters tunes are classic, killer 8-bit style versions of tracks from the characters’ home games. I wish certain parts of the game would get tweaked, but the art direction has no holes.

Code Shifter delivers a good to great experience on basically all levels. The graphics and sound direction are easily the game’s strongest recommendation, and they do manage to mostly paper over the game’s main fault. While the gameplay is fairly balanced in terms of a natural difficulty progression, the pace of the game is just a little too slow for my tastes. That’s not to say that it’s bad in any way, it would just feel more satisfying if things were a little faster. Still, the ability to transform into different characters from Blazblue and River City Ransom is a cool enough idea to pick up some of the slack in that area. Throw in a side game in Colorful Fighters that is almost fulfilling enough to be a standalone release, and you’ve got a game that will feel right at home in the collection of any gamer who loves platforming.