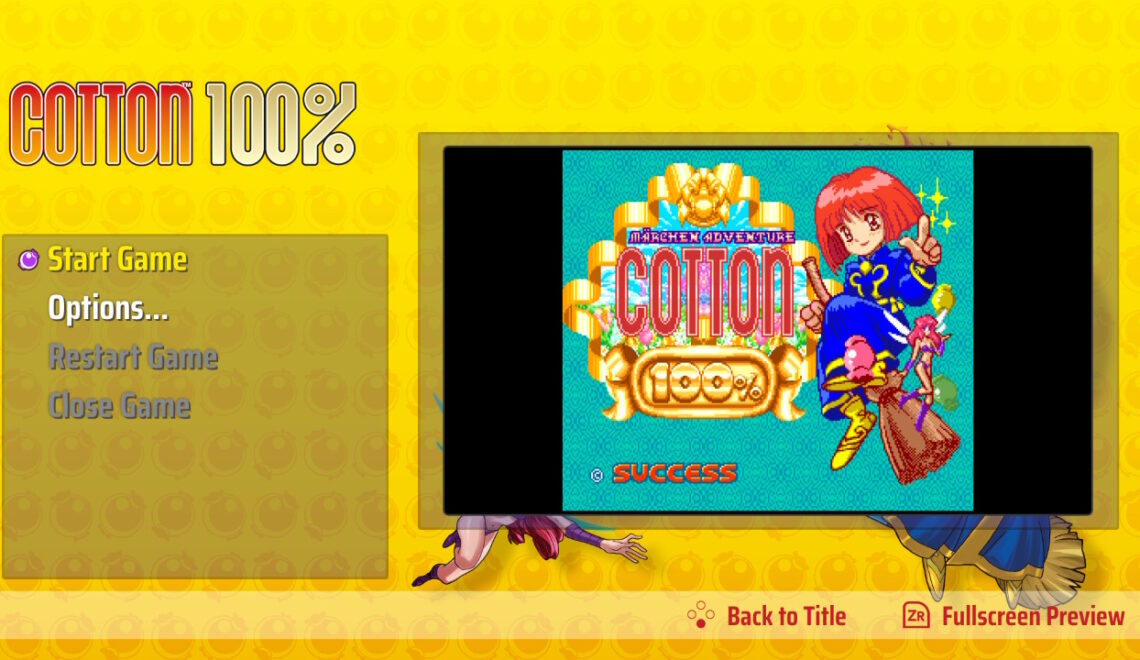 1994 not only gave us Panorama Cotton on Mega Drive, but a more traditional game on the Super Famicom. It’s Cotton 100%.

I would normally tell you that if you’ve played a Cotton game before, you will know exactly how things work. Lets start with the familiar. Cotton 100% is a horizontal shootem’up, like majority of the games in the series. You shoot enemies, collect crystals for experience, use magic, and end stages with a Team Time bonus. So about that magic, it’s not like the other games.

Imagine a Konami shooter where you choose your magic (shots, bombs, and options in those) before you begin a run. Magic isn’t something earned from crystals, but is instead usable on demand…if you have the crystal ball needed for it. Magic can usually One Hit Kill a boss, so this is your screen clear maneuver if you get overwhelmed. Of course, Barrier does return. You can switch between at any time as well.

As a consequence, Cotton 100% felt much, much easier than the other games in the series. The genre as a whole can get tough, and this game is not different, but I had relatively smooth sailing while playing. The game becomes even easier when you save fairies, which act as your Options. A high level and group of fairies can make some bosses trivial.

Cotton 100% is a fantastic looking game, as a game from 1994 on 16bit consoles should. Great sprites, lots of color, and everything is clear. Foreground objects sometimes covering the gameplay is questionable, but it’s a non-issue for most of the game. The music is pretty good too. Nothing spectacular, but it’s cute little ditties that are nice to listen to while shooting at giant pumpkins and creatures. Except Stage 3’s music, I like that one.

Emulation options are the exact same as Panorama Cotton’s, refer to that review.

Cotton 100% coming stateside is great. What’s not great is that between level cutscenes are still in Japanese. This isn’t so much a localization, but a straight port. This is something I didn’t even consider when writing my Panorama Cotton review until a friend mentioned it. There has been promises to patch in translations soon, so this isn’t something I’m going to lose sleep over. As for a re-release, while Cotton 100% has received ports before after it’s Super Famicom release, the lone port on Playstation was not good at all. Audio seems to be the real killer for a lot of ports. Luckily, Ratalaika does a great job at not bungling up this port. So yes, this Switch port is important, even if it’s not saving a rare game from obscurity.

While not quite as impressive to look at as Panorama Cotton, Cotton 100% is an arguably more enjoyable game for sticking to the basics. It’s always fantastic to see ports like this. Much like Panorama, 100% also has a pretty spiffy physical release and repro from Stictly Limited.