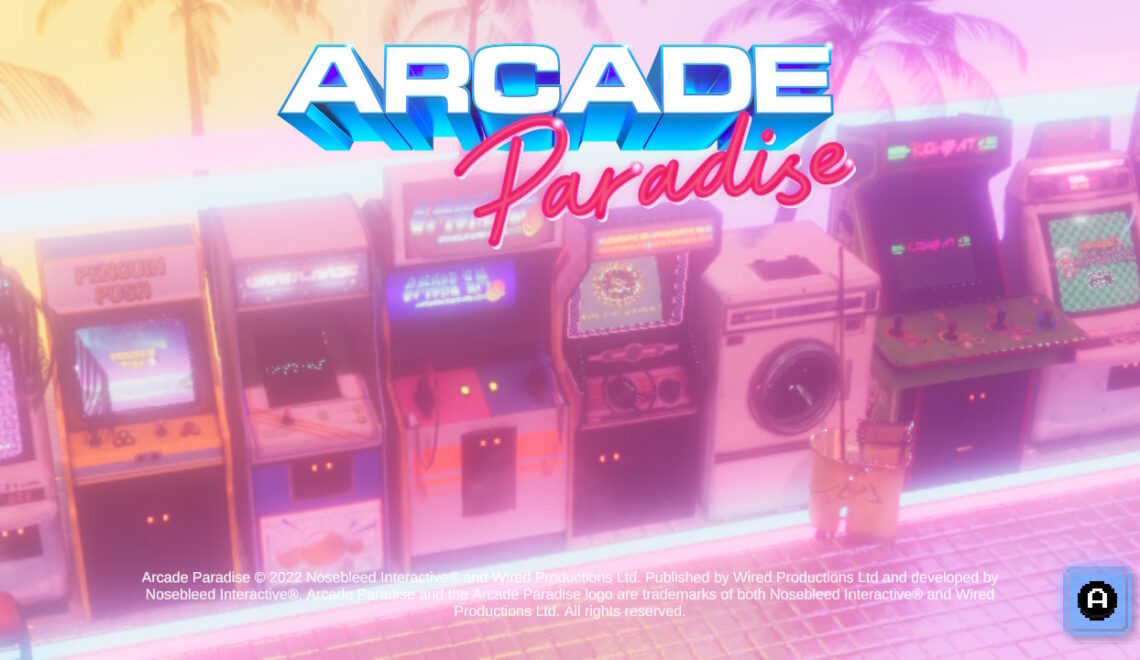 Your father owns a pretty shabby laundromat (aren’t they all?), but it still brings in money. You’re in charge of it now! And you’re thinking of making some changes. You make enough money from laundry right? You have those arcade games in the back, they make pretty decent bank too. Why not…buy some more?

Arcade Paradise is a game about making money. You begin just with your small handful of arcade cabinets and your washers and driers. At first you probably want to focus a lot on making sure the clothes is done in a timely manner. Do it better, make more money. Make more money, you can buy more cabinets. Need more room, you can do that too! Sooner or later, the arcade games will finally take over the laundromat. Soon…

The beginning of Arcade Paradise is going to be a lot of managing your time. You really gotta do the laundry, as it’s the money maker. You’ll want to play the arcade games, but you’re also going to want to get the best grade you can for laundry for more money. This can be annoying, as it means you will make absolutely zero progress in most games. You are a slave to your job. This changes eventually, but you’re going to have to straighten priorities at first.

Your arcade games will only make as much money as you let them. Position and what games it’s by are important. Maybe a game is a tad prohibitive. Lower the price, make it easier. A game that’s super hard and costs a buck fifty is gonna be a hard sell! If you want to ditch the laundry hustle quickly, you gotta make more from arcade games. The faster you do all that, the fast you can just dig in and enjoy these games

My favorite part of Arcade Paradise is those arcade games. Mixing Pac-Man with GTA is definitely new to me, but I’m all for it. Or how about Mr. Driller, but it’s just a guy mining for gold? Perhaps you want a futuristic OutRun clone, even with the selectable songs! There’s a truck load of these games and if you don’t like one, then you know…just play a different one. Though it’d be in your best interest to try them all, complete their challenges. It’ll boost popularity and by proxy, the money flow.

If you fancy the idea, you can do some daily tasks like picking so much of trash up, playing a game long enough, or getting a high score. This’ll net you money too, but this money is just used online to order new CDs for the jukebox or getting upgrades. CDs are cheap, but the upgrades are gonna take quite a bit of playing, but having an assistant probably will help a lot.

Arcade Paradise has a real nice look to it. There’s a bit of an 80’s-90’s flair to things. The arcade games have some spiffy, in addition to varied spritework too. The music is really good too. Most of the arcade titles just have little jingles, but the music you can get for the arcade or whatever plays when you do laundry is just *chefs kiss*. Unfortunately, the game seems to have the occasional framerate hitch, either moving around or playing the arcade games. Arcade Paradise doesn’t really run poorly, it just kinda seems not the best optimization they could do.

Yeah, the framerate issues don’t bother me at all really. I still was hooked to the gameplay loop, filled with desire to just go full arcade. I just want to play arcade games and not worry about doing laundry…sounds like real life, don’t it? Regardless, Arcade Paradise really does sort of live up to the name. You just gotta work for it, but when you get there, whooo boy. Also, input the Konami code before the title screen, trust me on that one.