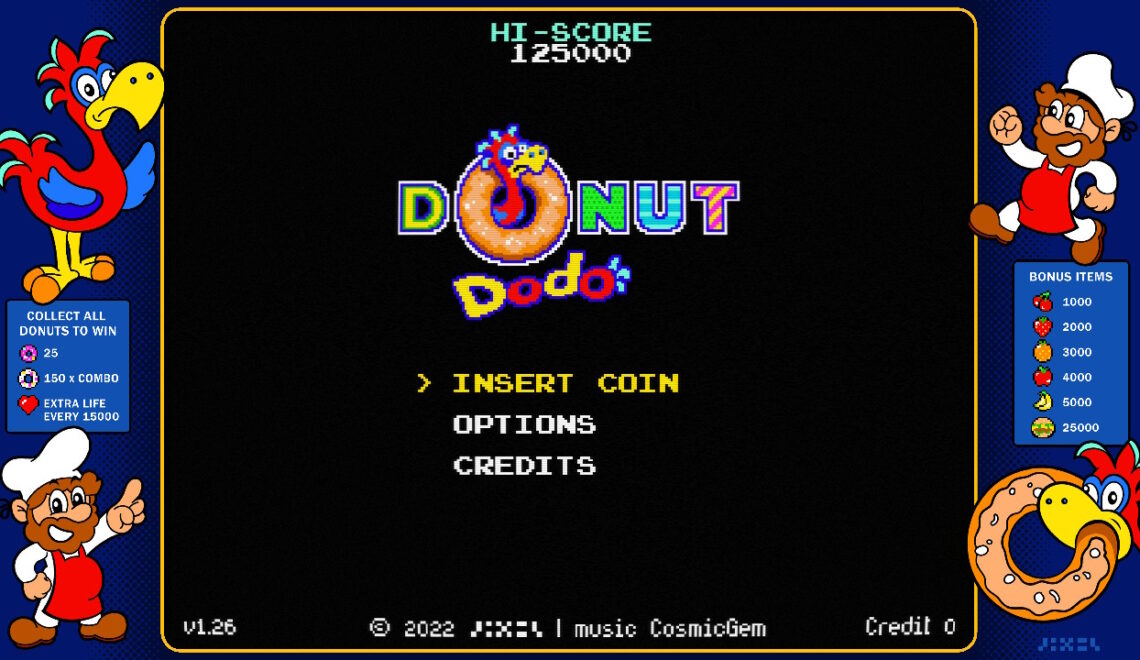 Donut Dodo is probably one of my favorite retro arcade throwbacks I’ve played in quite some time. There’s a lot of games that try to make “another Donkey Kong”, but I feel like Donut Dodo seems like it hit that mark.

There’s a pesky Donut Dodo. He doesn’t want out lead Baker Billy Burns to get all of these donuts, including the giant donut. You gotta avoid the minions, the Donut Dodo’s attacks, and collect all of those donuts. Can you last two cycles? There’s five stages, one bonus stage, and zero continues. This is a pretty hard game, as older arcade games would be. Thankfully, I didn’t feel like this was *too* difficult. At first I did struggle, but as soon as I properly grappled how the game worked and what would and wouldn’t kill me, I had smooth sailing…on a first cycle at least. There’s always next time I guess.

The five levels you’ll be playing are all unique with what’s tossed at you, the mechanics, and layout. The goal is the same every level however. Get all of those donuts, then the giant donut. If you can collect the donuts that flash, you’ll get much more points as well as starting a combo. This can help as more points means more lives. When I called this a Donkey Kong like, I suppose that isn’t 100% true. Your goal isn’t just to get to the top, though once you get every donut, that big donut is usually above you. I suppose my pea-brain sees a collectable needed, a big animal, and a general styling and thinks “DONKEY KONG”. But…this would be one heck of a successor. Ferris Wheels, tightropes, doors that lead to other parts of the stage. It’s fun mechanics that make this stand out instead of just “walk, ladders, jump”.

Donut Dodo’s music is just *chef’s kiss*. Prove me wrong, every good arcade game has a boss soundtrack. Donut Dodo is no different. I love this soundtrack. Everything about this game’s presentation is just fantastic. I love how colorful it is. I love the carnival theming that for some reason turns spooky. Love it.

Play Donut Dodo. Nuff said. Just go on and get to it. It’s good. It’s not frustrating and only is as hard as you make it. If you do perform well enough, don’t forget to put your initials in to the worldwide leaderboard…just don’t put *that* name into it. You know which one.