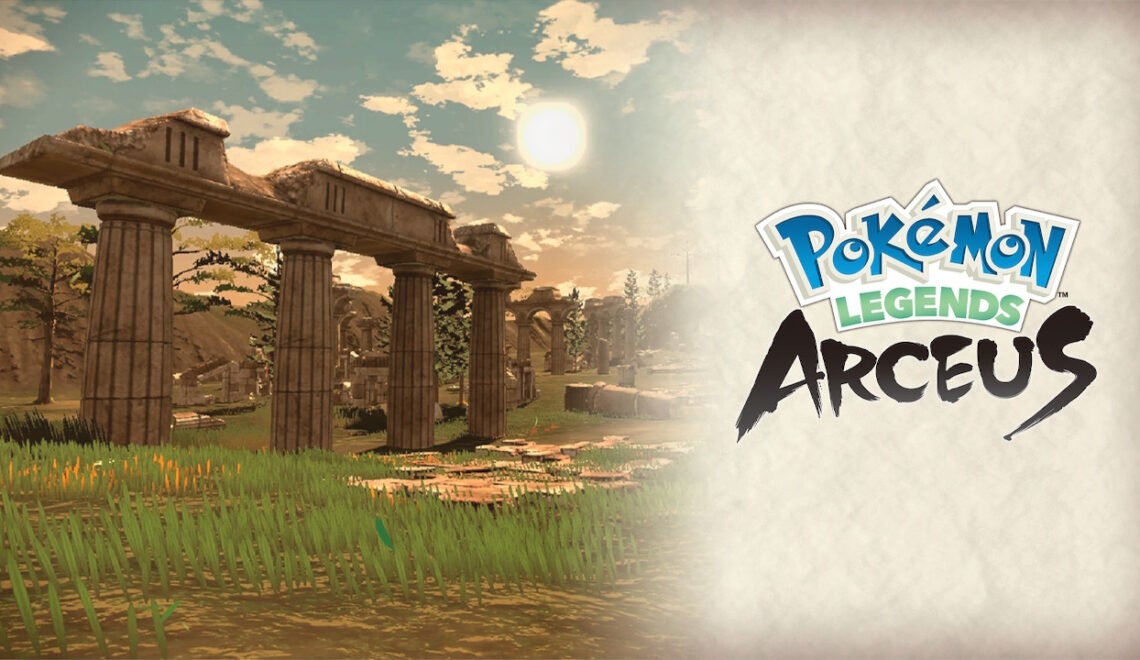 The Pokémon series has probably been in need of an update for some time. The franchise’s mainline formula has remained basically unchanged going all the way back to Blue and Red, save for some (admittedly cool) evolution gimmicks and pseudo-3D graphics. Introducing open world areas into Sword and Shield was a step in the right direction, but beyond that all it really offered was yet another evolution gimmick and some new (also admittedly cool) Pokémon. For years that was enough to make the games stay fun, but also a little less special over time. Pokémon Legends Arceus displays exactly the kind of growth the franchise was lacking, while keeping what worked from the standard formula. More importantly, it’s just a dang good time.

Thanks to Time Travel, You Get to Be the Very Best, Like Literally No One Ever Was

In Pokémon Legends Arceus, players take the role of a young Pokémon trainer who falls out of a rift in the sky. The player character comes from the present-day world of Pokémon, but wakes up in the distant past in the Hisui region with little memory of their prior life. All they have are the clothes on their back and a special Arc Phone given to them by Arceus, the creator of the world. Due to their talent for catching and taming Pokémon, they are quickly enlisted into the scout division of the Galaxy Team and tasked with exploring the region, resolving issues with the native Diamond and Pearl tribes, and completing the world’s first Pokédex.

As far as Pokémon storylines go, PLA stands out as fairly unique. Most games follow a formula of travelling from gym to gym, collecting badges, and ultimately competing in the final tournament, with a side story about an antagonistic organization and/or a legendary Pokémon. Arceus does away with gyms and tournaments – although the storyline about legendary Pokémon remains. The story focuses on exploration, discovery, and the burgeoning relationship between Pokémon and humans. If you’re at all interested in Pokémon universe lore, Pokémon Legends Arceus is the game you’ve been waiting for. It’s still a game meant to be enjoyed by players of all ages so it remains a little simplistic, but it definitely feels fresh and original compared to any other game in the series.

What? Pokémon is Evolving!

The major game mechanics get a big overhaul, which generally makes the game smoother and less repetitive. Right off the bat, the game’s different areas are open world – though they are not one continuous map. The Pokémon and crafting reagents strewn all across the maps make exploring feel rewarding and worthwhile. A major crafting component has been added to the game; you don’t only craft Poké balls anymore. Potions, bait, stealth items, and evasion equipment can all be crafted with items scavenged from the wilds. You can just buy items, too, but generally the items available for purchase are a tier or two below what you can craft.

Exploration itself gets an upgrade in the form of mounts, which can be summoned by a flute after meeting certain legendary Pokémon during the story. The first few mounts aren’t that different than the bicycle or dowsing rod from previous games; you meet Pokémon lords that let you move faster, sniff out hidden items, and move across the water. Later lords let you scale cliffs or fly, which add the most original and satisfying elements to exploration.

Gotta Catch ‘Em All (Again (For the First Time))

Probably the biggest change to the formula, however, is the mechanic of actually catching Pokémon. Pokémon spawn on the world map, and they have different reactions to being approached. Some take no notice of your presence and carry on as they were. Some will get skittish and run away when they see you. Still others will get angry and charge if you get too close; you can dodge, but if you take too many hits you black out and go back to the nearest camp with your satchel lighter by a few items. In order to approach Pokémon without scaring or angering them, you have to sneak around. You can sneak out in the open, and as long as you approach a Pokémon from behind they won’t notice you. You can also sneak through tall grass or use items to stealthily approach a Pokémon from any angle.

The game’s open world throwing mechanic is a simple, intuitive method for selecting between throwing a Poké ball containing one of your Pokémon, an empty Poké ball, or any of a number of lures or stun items. The traditional method of using your own Pokémon to instigate a fight, wearing your opponent down, and tossing a Poké ball at them when their health is low is still an option. More importantly, however, you now have the option to just sneak around and catch Pokémon without fights by simply tossing a Poké ball their way. You can increase your chances of catching a ‘Mon by distracting them with food or stunning them by throwing items such as mud balls.

To Train Them is My (Less Tedious Than Ever) Cause

The most wonderful part of the new state of affairs is that it cuts down on grinding SO MUCH YOU GUYS. Your Pokémon all gain experience points for both defeating or capturing a Pokémon, whether you go through with a battle or just toss a Poké ball. This gets rid of the need for endless battles to grind out evolutions – you can just toss Poké balls at anything that moves and get experience from five captures at once instead of grinding through five separate battles. You also get experience points for using Pokémon to collect crafting reagents, such as knocking berries out of trees or smashing rocks to get iron chunks and stones. Overall, you can level up and evolve your Pokémon so much faster with these methods and it feels great.

You may ask yourself “But John, if I catch too many Pokémon won’t that just clutter up my boxes and introduce a new, tedious, even less rewarding task of releasing Pokémon en masse?” Glad you asked. First of all, after you release a few Pokémon you gain the ability to release multiple ‘mon at the same time. More importantly, every time you release Pokémon you receive grit items. Grit items raise your Pokémons’ effort levels, which replace the hidden IV and EV stats from previous games. If you want to raise your Magikarp’s speed at a higher rate, simply use some grit gravel to raise its effort level. The result is both a great reason to catch a bunch of Pokémon instead of battle grinding and a great way to strengthen your team in multiple ways.

While completing a Pokédex has always been part of the Pokémon experience, it takes on new purpose in Arceus. Practically speaking, completing the Pokédex replaces competing for gym badges. No longer is catching a Pokémon sufficient for completing its entry; multiple tasks ranging from catching multiple samples of a species, using specific moves, or evolving a certain number of specimen are required. You only have to complete ten tasks from each list for a Pokédex entry to count as completed, but you can (and should) do more.

You are rewarded with cold, hard cash as well as Pokédex points in exchange for completing tasks and entries. Instead of collecting badges, you earn stars depending on how much of the Pokédex you’ve completed. More stars nets you new crafting recipes, better rewards for completing Pokédex tasks, and the ability to command higher level Pokémon. Some of the tasks do get tedious, unfortunately – I mean, honestly, what in the heck could POSSIBLY be the reason Professor Laventon needs to see Magikarp use Splash 100 times?! – but it’s still a refreshing and enjoyable evolution of a traditional Pokémon element.

There are numerous other changes made to the Pokémon formula that make the game more engaging. Foremost among them is the way in which moves are organized. Previous games restrict you to four moves per ‘mon. PLA restricts you to four active moves, but you retain access to all the moves you learn and can change your loadout at any time outside of battle. Moves can also be mastered, which allows you to use them in either the agile or strong form. Agile techniques are less powerful and accurate, but can allow you to make your next move faster. Strong techniques add to a move’s power, but might delay your next action. It introduces a new tactical element to battles, which is cool and all, but I never found exploiting the forms to be especially useful in the game’s biggest battles.

Evolution is more convenient as well. In PLA, evolution is initiated from the menu, not automatically. This means that you don’t have to keep cancelling an evolution every time a Pokémon levels up if you still need its current form. You can keep using a Pokémon until you’ve filled out its Pokédex entry or learned the move you were looking for that isn’t available at higher forms of evolution. It’s a small but noticeable quality of life change that many players probably won’t consider important, but I don’t think I could go back to playing Pokémon games without it.

Some Folks Have Very Inaccurate Recollections of the PS2

Pokémon Legends Arceus has taken a lot of flack for its graphics, which I just don’t get. It’s been said that it looks like a PS2 game, which is just crazy – at worst it looks like a late-cycle PS3 game. I agree that it doesn’t look anywhere near as impressive as Breath of the Wild, but graphics have never really been a priority for the franchise. Arceus’s graphics are a faithful rendering of the traditional Pokémon aesthetic in three dimensions. Are the graphics a little simplistic? Sure, but they’re also vibrant, friendly, and consistent.

I’m more disappointed in the game’s audio; there’s no voice acting, which I don’t personally need but it would not have been unwelcome. The music, on the other hand, is somewhat forgettable. This is exacerbated by the fact that the music volume will drop when you’re in sneak mode, making it barely noticeable. The game also has some trouble deciding when you’re sneaking and when you’re not if you’re walking through tall grass, so the volume may drop randomly because of that. Transitioning between music tracks when entering different areas of a map is also abrupt and inconsistent.

Pokémon Legends Arceus is exactly the shot in the arm the Pokémon fanchise needed. It combines great new ways to catch Pokémon and explore their world with traditional franchise mechanics in ways that feel natural and intuitive. It’s that rare beast that fulfills all the demands of nostalgia and still feels fresh and new. Don’t listen to the haters, this game rocks.