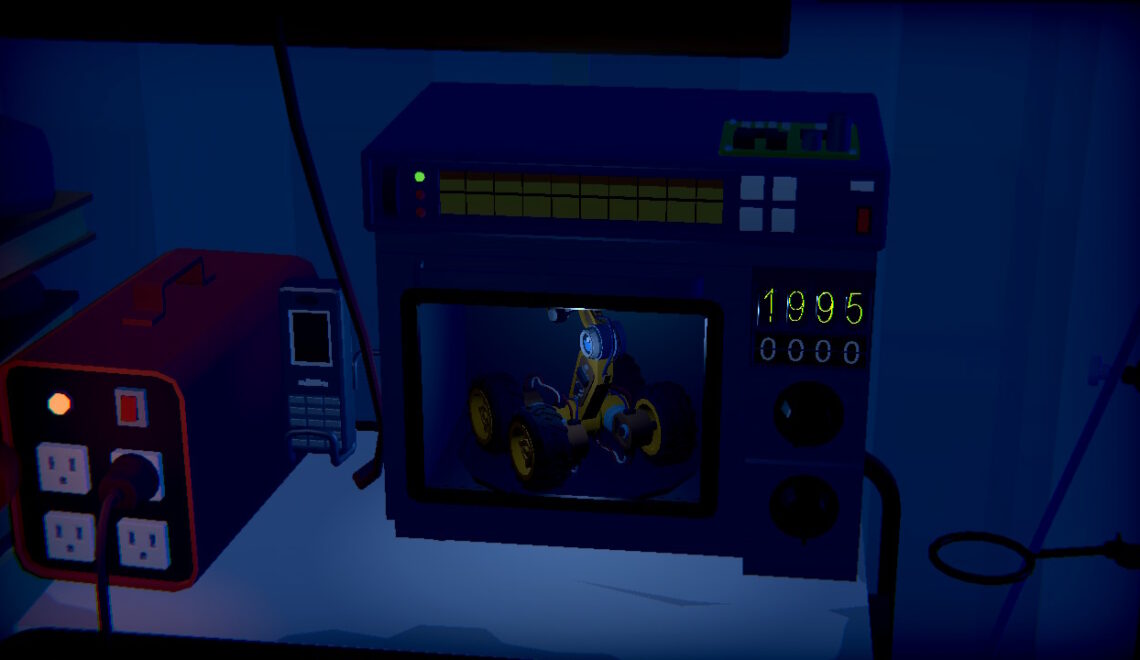 When a young man named Adam fell as a child, it paralyzed him and ruined his dreams of baseball stardom. So he did what anyone would do, and focused on science. Eventually, he became brilliant enough to build a time machine, which he uses to send a small robot back in time. And so begins the saga of today’s game, Time Loader for the Nintendo Switch. Players assume the role of Adam’s plucky robot, tasked with finding and averting the events that led to Adam’s paralysis. It’s not as easy as it sounds, however, as it turns out that changing the past can have unintended consequences.

The game is told in three acts, each presenting their own problems for Adam’s timeline. No spoilers, but the lesson of the game is that sometimes it’s best not to obsess over the past. The twists and turns aren’t exactly unpredictable, but the writing is tight enough to keep the story interesting for the whole experience. Plus you just can’t help but love the little robot’s can-do attitude. It was very inspiring. There are multiple endings to discover – including one secret ending if you can find all of the hidden symbols – which add plenty of replayability to the game, which is always a nice bonus.

Time Loader plays out as a side-scrolling puzzle platformer. Players move the robot around Adam’s childhood home, moving toys, household objects, and an ill-tempered cat to alter Adam’s history. The controls are pretty simple, if a tad clunky. You can run (well, roll, I guess?), jump, and grab things with the robot’s grabber arm. The robot is a little slow, which isn’t really an issue unless you’re stuck on a puzzle and just want to get back to a certain point in the level quicker. The robot’s jump isn’t very powerful at first, but gets much better when you collect some springs to increase your jump range.  The grabber arm – which can also throw objects you’re holding – is the clunkiest part of the game. Aiming with the thumbstick is shaky and feels imprecise. Luckily, most of the time you don’t need pinpoint accuracy. Just throwing things in the proper general vicinity is good enough.

Puzzles range in difficulty from easy to nonsense. The game’s clunky physics make many puzzles harder than absolutely necessary – specifically, it can sometimes be hard to tell what is a path and what isn’t. Some things can be glitch jumped over, while some things are harder to climb to or can’t be easily jumped to, making them seem like they aren’t the right path, even when they are. The latter problem mostly disappears once you get the jump enhancement, but in the early goings it was an issue for me.

Time Loader isn’t generally trying to be noticed for its art direction. The graphics are clean and attractive enough, but they aren’t going to blow anyone away. The music fits the atmosphere the game builds, but again isn’t one of the game’s main attractions. The voice actor who plays the robot does a wonderful job in the role, however. Overall, though, Time Loader lives and dies with its gameplay. With its good puzzle design (with some warts, sure) and intriguing story, playing through Time Loader makes for a fun afternoon. Moreover, its multiple endings provide plenty of reason to come back and explore the game’s levels further, if that strikes your fancy. Overall, Time Loader is a sure hit with gamers who love to solve puzzles and enjoy a good story.