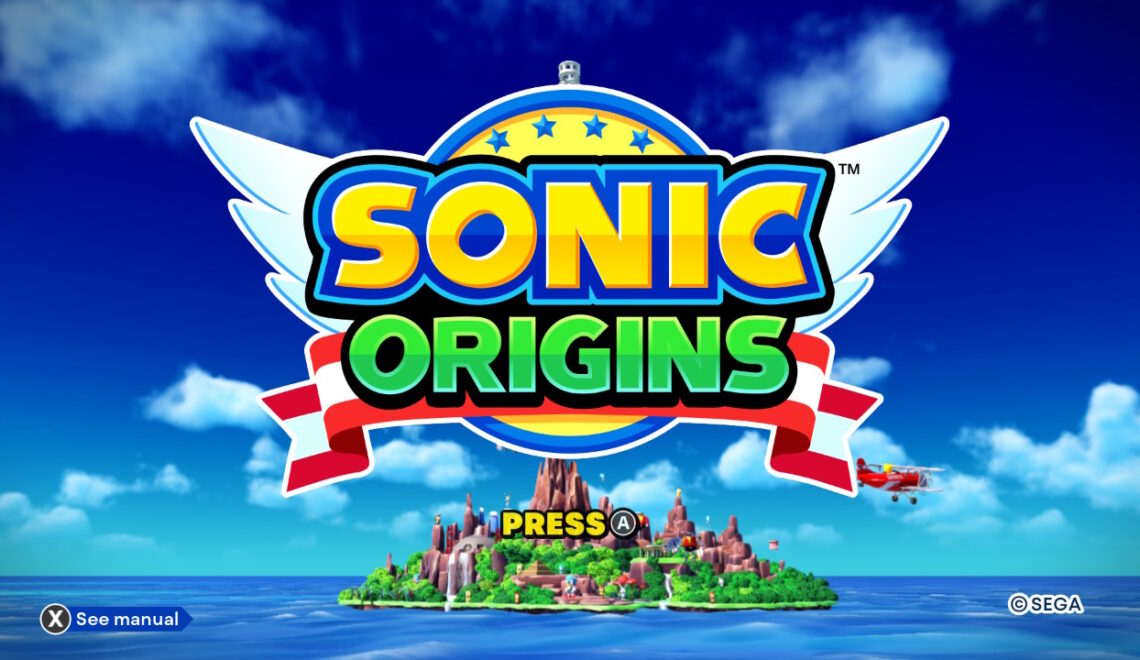 Oh boy, another port of Sonic 1 and 2 to current gen consoles. How many does the Switch have now? 4? Well, Sonic Origins does one better than the others. This isn’t a port of the Genesis games…again. This is a port of the critically acclaimed mobile ports! Even better, we have the fantastic port of Sonic CD from 2011 and even a new port of Sonic 3 & Knuckles!

Lets catch people up to speed. From 2011 to 2013, we’d get remastered releases of Sonic CD, 1, and 2 by the wonderful Christian Whitehead and Headcanon using the “Retro Engine”. Widescreen, 60fps, general QoL improvements like saving and even new characters that shouldn’t be there like Tails and Knuckles for 1 and Tails for CD. These are definitely the definitive releases of each game and until now, these were mobile only outside of CD. Now that they’re on Switch along with that Retro Engine Sonic 3, lets dig in and get all nostalgic.

Sonic the Hedgehog, where it all started. This first game is a little different than the ones to come and usually is the less spoken about game outside of Green Hill Zone. First, it’s definitely not near as fast as the other games. There’s no spindash and the stages are outright more about platforming for the most part. There’s only Six Chaos emeralds and they do nothing outside of giving you the Good Ending. Special Stages in this game are found by getting to a stage goal with 50 rings and jumping into a giant ring, dropping you off in this dream like gem infested area.

Now that you’re familiar with the Genesis version, what’s new here? While not exactly new to these ports, Sonic can Spin Dash now! The levels aren’t exactly designed for this, but it’s a welcome addition, especially when you want to really speed through these levels. Tails and Knuckles are here too! Other than that though, this is just a smoother Sonic 1. Labyrinth Zone still is awful though.

Sonic CD is up now. When Sonic 2 was in development in America by Sega Technical Institute, Sonic Team over in Japan was making this game. In some ways this game is modeled like the first game like it’s goal rings and lack of spindash, in other ways it’s a complete revolution of Sonic the Hedgehog. A love interest in Amy and a rival in Metal Sonic are introduced. Stages in Sonic 1 were open and you could choose your path, but CD takes it to another level and you’ll definitely get lost.

On top of that, there’s the time travel mechanic. You’ll run into signs that say PAST and FUTURE, you’ll want to go into the past to destroy machines Robotnik has up causing havok in each stage. Doing so will change a Bad Future into a Good Future. Those machines are quite hidden in some stages however. Sometimes they’re really in plain sight, if not slightly off the beaten path, other times they’re deviously hidden in places you would normally never consider. Near a crushing, instakill piston for instance.

The special stages are fantastic. A Mode 7-like area, you view Sonic from behind and need to jump into and destroy UFOs. It can be tricky with some depth perception issues (imagine these in VR or on the 3DS, that’d be great), but they’re never feel outright unfair. Beating them gets you the Time Stones, which is an alternate way to get the Good Futures and Good Ending.

Originally, Sonic CD had what is called the Peel Out. A cool animation and the proto Spindash, which we wouldn’t see until Sonic 2 and the Retro Engine ports. For the most part, you’d be using this when you hit those Time signs. You need to get fast and stay fast, kinda like Back to the Future. The addition of the Spindash doesn’t really do a whole lot outside of being an easier to use Peel Out and keep CD in line with other titles, but it’s a welcome addition.

Sonic CD has one of the best soundtracks in the series. Yes, both of them, though I prefer the US soundtrack by Spencer Nilson. Each stage, each time period, they all have their own song. This release lets you choose between them too, so enough complaining and arguing.

We’re at Sonic the Hedgehog 2 now! Tails is here, Zones are now two acts instead of 3, and the Chaos Emeralds finally do something! Super Sonic is finally here! Special Stages are found by hitting checkpoints with 50 rings too.

Lets discuss those real quick. They’re awful, at least on the Genesis. A halfpipe, pre-rendered graphics, collect all the rings, simple, got it. The framerate is absolutely atrocious. Swerves mean you’ll either miss rings or hit unseen bombs that make you lose rings. Forget about bringing Tails into these, as sometimes he won’t move or jump in time to avoid hazards, meaning MORE lost rings. The Retro Engine port makes these Special Stages so, oh, so much more tolerable.

Sonic 2 seems to take the more speedy stages of the first game and makes a whole game out of them, which is such a pleasant change. As a whole, Sonic 2 has quite the brisk pace until the final few Zones. Sonic 2 ends on a rather poor note in my opinion. Bottomless pits, a three act Zone, and a two phase final boss where you don’t have any rings. Not exactly fun.

Not everything is bleak however. Sonic 2 allows for co-op, with a friend controlling Tails and even competitive modes. Tails in invincible, so if you want, you can just make him take all of the damage and hits for bosses. Having him behind does, like mentioned earlier mess with Special Stages however.

A new addition to the Retro Engine port is the inclusion of the illusive Hidden Palace Zone! It’s a bit out of the way, but it’s just a cool little edition and even has a brand new boss. Lets just say it’s found by going to *that* pit in a certain Zone.

This is what we’re all here for, right? Finally, we have a Retro Engine port of Sonic the Hedgehog 3 & Knuckles. Oh and also a modern release period. There’s a single caveat though, the Michael Jackson/Brad Buxer music is gone. In it’s place are “finished” versions of the songs found in the 1993 Prototype as well as the old PC port. They’re fine, but my nostalgia is way too strong for those old tracks.

Not much has changed in these ports outside of the music. But the novelty of having Sonic 3 includes in any collection is awesome. If I had one issue with it’s implementation though, it’s the fact you are forced into playing Sonic 3 & Knuckles and not just either game. That’s a nitpick for me though.

Sonic 3 has four Special Stages. Three are just for funzies to get powerups and rings, each at different ring counts when you hit a checkpoint. The first of which is like if we had Sonic 1’s Special Stage and mixed it with Casino Night Zone from Sonic 2. A nice slot machine game. Then we have the floating orbs, which will have you time your spins and jumps to get rings and powerups. Third up is the Gumball Machine! Just hit those bumpers on the side and spin the handle, out comes rings, powerups, an air bubble, nothing, etc…

And then we have Blue Sphere. By far the best Special Stage in the “Classic” games. Touch the Blue Spheres, don’t touch the Red ones. Collect coins on the way. It’s simple, there’s no physics messery, it’s straight to the point. You’ll want to do these in both Sonic 3 and the Knuckles half for fourteen emeralds. It’ll be worth it. To get to these stages though, you’ll have to find Big Rings. Some are out in the open, some require you to take those more tricky paths. In Sonic 3 you’ll probably only find a few per level, but they are absolutely everywhere in Knuckles. Fans of Blue Sphere will be very very happy, especially since outside of playing 3K, you’ll have even more levels.

So…how do I feel about Sonic Origins as a collection…mixed to say the least. Lets start with the bad. Four games, regardless of them being ports for $40 ($45 with some extra Gallery items) is not exactly the best value. Especially when at that price point I can say, but just about the entire Mega Man series on Switch. There should have been more games, even if it was just emulation. It’s so bizarre to have Gallery sections for 3D Blast, Spinball, and Chaotix, only to not have them included.

Ok, now for the good. First, I ADORE THIS GALLERY. Full soundtracks for all four games, the remixes from Sonic Generations. Lots of art, promo, concept, even weird single use style guides for Europe. Some animations, the Sonic orchestra, even the Sonic Mania shorts and some animatics! My favorite part of all, there’s full manual and cover scans for all four games for all three regions. Yes, yes, yes! I am always so happy to see this in newer game collections. Keep. Doing. This.

Onto how this all works with the games. The main draw is the Anniversary Mode or even more specifically the Story Mode. Those wide screen Retro Engine ports, infinite lives, and you can continue Special Stages as long as you have coins. Coins are collected instead of lives or continues, ,and can be used for either redoing Special Stages or buying things in the Gallery. Before and after each game in Story Mode has cute animated cutscenes too to bridge the games together. And yes, it goes from 1 to CD to 2 to 3. Not 1, 2, 3, 4, CD like before.

Sonic Origins also has a Mission Mode, which is home to little challenges for each game to also unlock coins. These are fun and are usually unique enough to feel like you’re not doing the same thing again and again. And also a really really fast way to stack up coins. There’s even a Mirror Mode.

Stardust Speedway Present US is Still the Best Song

I really liked Sonic Origins. I’m being told by “hardcore” Sonic fans that this is broken, its a travesty, and other toxic fanbase rhetoric, but I suppose as a “casual” fan I really didn’t find many issues that seemed out of the ordinary. Yes there are bugs, but these bugs existed in the original games or existed even in other games in the Engine like the fan favorite Sonic Mania. There is nothing that can’t be fixed with patches.

With all of the extras, I love this package. With retro games, it’s a tad tricky to really convince people why they should buy it. People are always looking for reasons not to. I think there should be more games, but for what Sonic Origins is, it’s a fine release. Though maybe on sale.