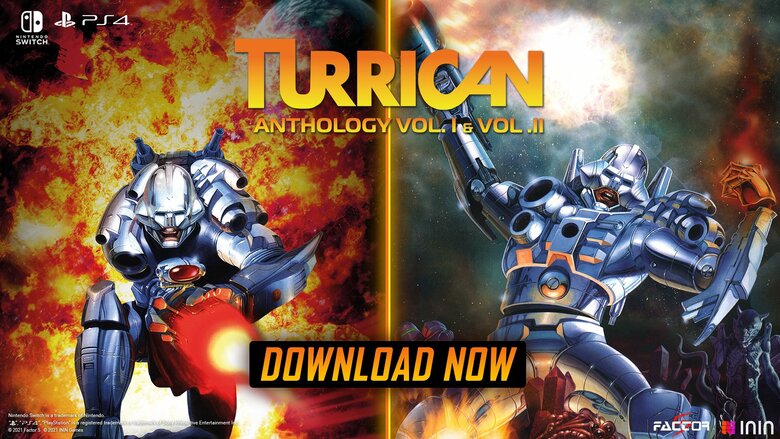 Back in early 2021 I had reviewed Turrican Flashback, my first look into Ratalaika Games’ emulation efforts in their partnership with ININ games. At the time of that review, you could preorder Turrican Anthology from Strictly Limited Games, two games that would have even more games than Flashback. Now, Turrican Anthology Volume 1 and 2 are both on the eshop, but is there a reason to buy these over Flashback? Well, yes.

Super Turrican Director’s Cut has a bit of a history. Back when the title was in development, Super Turrican ran into some issues and was not the planned project. Developed with 6MB of space in mind, but forced to cut back to 4MB due to publisher demands (most likely a cheaper cart), content had to be cut. The biggest of which being enemies and an entire world in the game. Thankfully, this version wasn’t lost forever and was put on the Super Nt back in 2018, and now just recently having a physical repro and a port to modern consoles.

I feel it’s closer to say this Director’s Cut is more of them cleaning up a prototype than an enhanced edition of Super Turrican. Those cut enemies and a cut stage are finally back! But then it seems like the introduction is missing things the final release had and as a whole the stages are re-arranged. I feel like this is more of a curio than anything, but having a modern re-release, let alone one that’s physical of a different version of any game is incredibly important. I will find myself probably playing the Director’s Cut more often if only for the extra content.

Here with another curio. Turrican 3 is the Amiga version of Mega Turrican. The Turrican series has always had a home and history on Amiga, so it only made sense to port the Genesis game to the console. In a twist of irony, it came out first because a huge surprise…publisher shenanigans! How is it though? Is it a huge downgrade? Not really, no.

The biggest things you’ll notice right away are it’s smaller resolution and the fact the HUD now takes up a segment of the screen in a bar, no longer overlaid over gameplay. At first graphics are going to be rather comparable to Mega Turrican, with some impressive sprites, but you’ll notice quite quickly that there’s some animations missing here, some color missing there, etc…Until near the end of the game though, it looks damn faithful. Then comes the Junkyard where nearly all color escapes this game outside of your sprite. It’s kind of jarring and I wasn’t sure if it was a bug until it all returned during the final stage.

The music however, which I was a fan of in Mega Turrican, is still fantastic in the Amiga version. Music is consistent in these games.

The one Turrican game I have no real experience with, and what would end up being the last of the original Turrican games. If you love those pre-renedered openings and logos, you’re gonna love Super Turrican 2. It really is the best looking game in the series. Gone is the pretense of vast open, maze like stages. What we have here is more linear, bombastic stages. For instance, the first stage has a speedy vehicle session, then there’s a setpiece of you hooked to a jet, it’s a lot more involved and exciting than previous games. I’d say that this is like Mega Turrican on crack. But alas, it’s on SNES, so it’s Super Turrican 2 of all titles.

Despite being linear, still still feels like a Turrican game. Eurojank difficulty and all. My biggest issue, bottomless pits are quite plentiful depending on the stage and considering this game has limited continues, that’s a big no-no. At least lives are mostly easy to acquire. The dependence on an iffy grappling hook can also be an issue, but you get used to it fast.

Music in Super Turrican 2 is kind of creepy to be honest. It has a haunting feel to some of it, but then it only makes the transition to triumphant music even more spectacular.

I tried to find differences from the original, and maybe I’m not too much an expert on Mega Turrican, but I just couldn’t. Someone please help me with this.

Think you’re good at Super and Mega Turrican? Can you get as far as possible with no continues? Then go dig in to both of these with Mega in Volume 1 and Super in Volume 2. I am not good at Turrican at all, so I did not last long at all.

Now we’re at the good stuff, what makes the Anthology releases worth your time over Flashback. First off, galleries. Every game has cover art from all regions the game was available, even new ones from those repros. All license stuff is replaced by cute Strictly Limited logos too, I love it. I’m glad they just remade license logos and the like instead of just blanking them out. Each game also has manual scans, again for each region. Flashback had none of this, so we’re off to a great start.

Each game also has music and art galleries, though you’re gonna have to beat them all Challenge Mode (no cheats or rewinds) to unlock these. Some of the games are hard and Challenge locks out some QoL stuff, but they’re not impossible. I do wish it was on a per game basis and not every game though.

Majority of the older Turrican games are a bit…large, you can easily get lost or find yourself going in circles. This is a problem no more as by pressing in the right stick, you can bring up a map. The implementation is a tad odd, as you kind of build it. But this stays after it’s been made, which really helps for replays. Each game lets you use the wonderful CD quality or game quality tracks. They’re all good, so it’s on preferences.

If you’re familiar with Flashback or really just Ratalaika’s work period, nothing really new about the emulation here. Anthology however is substantially more stable than Flashback at launch, which crashed a few times for me. Not the case here.

If you’re a big Turrican fan, get this. There’s some omissions like Micro ports that are odd and the NES Super Turrican.. If you played Flashback, it might be a hard sell, but I find the extras well worth the extra money and split release. If you didn’t play Flashback and are interested, then definitely give Anthology 1 and 2 a shot. And perhaps grab the Strictly Limited Games physical copies if possible.

*Game Download Codes graciously provided for the purpose of review