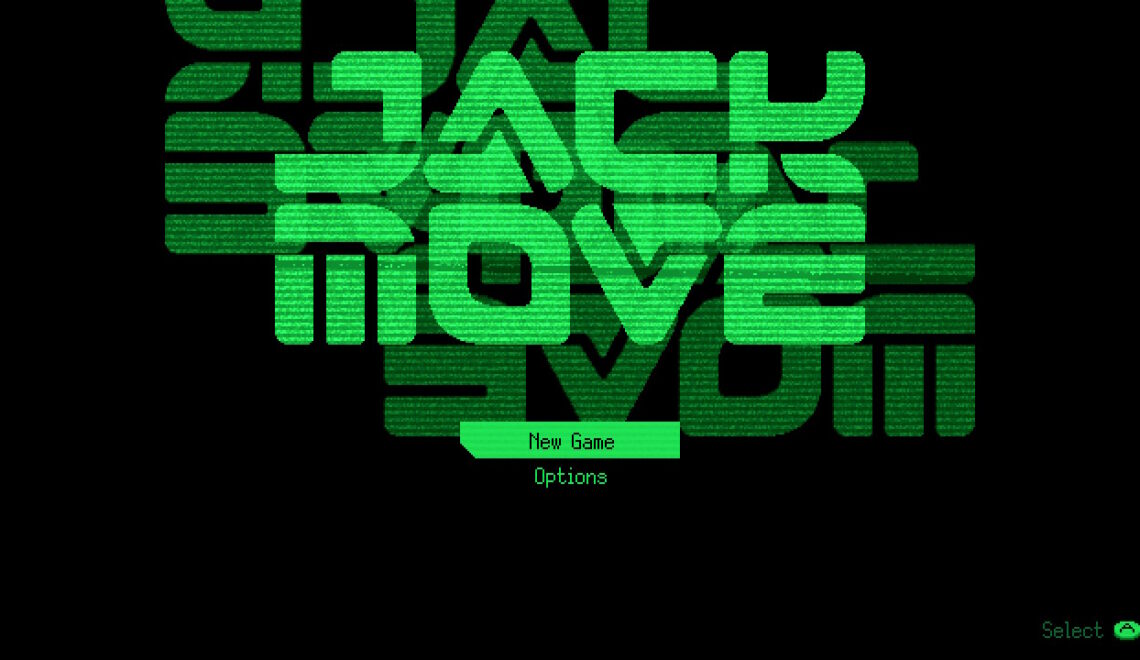 I’m gonna be honest, you’d think since I enjoy RPGs, especially turn based RPGS close to the JRPGs I played growing up, I’d have played more computer themed RPGS…and no not really. For this reason, Jack Move is incredibly novel to me. And yes, this game is completely ingrained in it’s identity.

You’ve heard it before in cyberpunk stories, an overzealous corporation controls entire cities. In this case it’s Monomind and Bright Town. Our lead Noa is a hacker living in Bright Town. Just living by, doing jobs with her friend Ryder until her father is kidnapped by Monomind. Then it becomes personal. This leads her on a quest with her friend Ryder and a few more to get him back.

Jack Move is one of those turn based RPGs you may or may not have played. I always liked these, I grew up playing these, so it’s nothing I dislike. This just means that you attack, the enemy attacks, and so on. This means you gotta plan out if you should attack, use items, heal, etc… A risk, reward kind of thing. The issue people have with these games is more often with how slow they are, but Jack Move has a lighting fast pace and you’ll never be waiting long. Random encounters are still sorta random, but there’s a “Threat Level” meter that will raise the closer you are to a fight. So at least you know it’s coming.

Absolutely everything is contextualized with tech or computers. To use…er..Execute abilities, you need to install software. You need to put hardware into expansion slots as your equipment. Items are patches. Combat is no different. An attack is a “hack”. Certain moves you have and enemies have theming too. It’s nothing that is going to absolutely break the game, but say you have a Cyberware attack, use it against Electroware. Electroware into Wetware. Wetware to Cyberware. You get it, like Pokemon or Mega Man. I love the name of some of your abilities/software. Intravene is your “heal”. Port Scan is to scan an enemy’s stats. Your special, super powerful move is the titular Jack Move. Once the meter fills up, you can let loose. Just be sure to time your button presses correctly.

Something I enjoyed particularly was that the game incentivizes you to use all of your abilities. It does this by giving experience to them with use. I mean, sure this is in a lot of RPGs, but any time I see a game that doesn’t just reward using only a single special attack, I feel like this is a good thing.

Good lord is Jack Move a good looking game. There really is no shortage of RPGs on the Switch by indie developers that just have the most pleasant spritework. I’ve made it known I love the no outline shading, right? Jack Move pulls it off so well. From the environments to the characters and their dialog images, to the enemies. Things are colorful, they stand out, it’s just great. Who says great spritework is dead?

Music is full of hype beats too. Really fitting of the electro, cyberpunk, gross kind of feel the game has going towards it. The drums really do it for me. It’s not just endlessly blaring at you though, when the game needs to feel more dangerous or suspensful, or even serious, it can tone itself down. That all said, despite me really liking the music and it honestly being stellar…none of it really stuck with me as ear worms.

Jack Move isn’t a terribly long game, but it does leave an impact and doesn’t overstay it’s welcome. It’s nice to have games that don’t waste your time. Now, for an RPG being short, you might think there isn’t much to story or lore. Wrong. It’s everywhere. It’s not really needed, but I appreciate it.

You could argue that nothing on the gameplay front that Jack Move does is novel. But to me, the presentation just more than makes up for it. Jack Move plays well, and honestly that would have been enough, but not only does it play well, it looks and sounds pretty good too. Sprinkle in some snappy writing, especially in that banter, and you’re in for a good time. Also, hack those Monomind displays whenever given the chance, trust me.