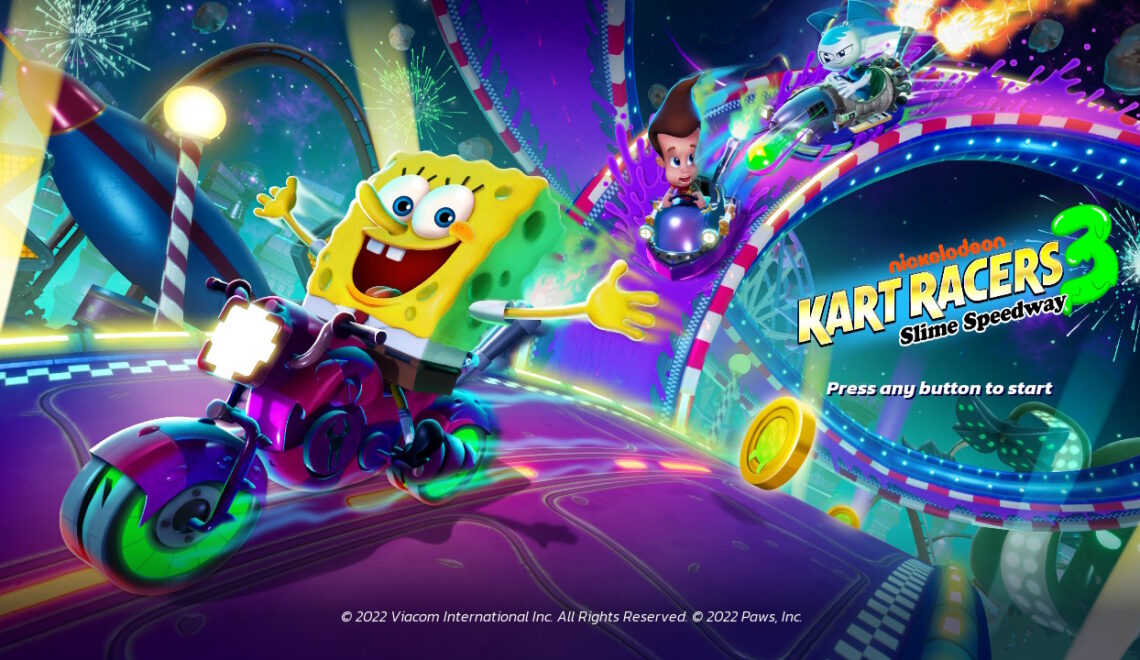 Here we are, the third in the line of Nickelodeon themed kart racers on the Switch. Nickelodeon has always existed in the game sphere, but licensed games have honestly really taken a backseat since mobile gaming has grown. It did take a bit, but Nick has slowly eased into giving their games more and more budget and time lately. Nothing showcases this more than the evolution of the Nick Kart Racers series.

Would you believe that it took three games to get voice acting? Another recent Nick game only got voice acting thanks to an update this year and it truly truly makes the difference. When you have an brand full of these iconic character, having no audio almost makes the games feel soulless. Thankfully, this isn’t the case at all, and boy do these characters not shut up.

If it wasn’t obvious, Nickelodeon Kart Racers 3 is a kart racing game. These are super arcadey racers that have you on creative courses, with large casts, and are full of items to use to screw your opponents over. To me, Nick Kart Racers 3 feels like a mix Mario Kart 8 and Sonic All Stars Racing Transformed. Lets clarify that real quick. The SASRT feel comes from how some stages will have a water section. In these, your vehicle will switch to a boat, with new controls at that. Otherwise, this feels like a budget, licensed Mario Kart. Karts and Motorcycles? Sure! Lots of parts to customize? You know it! There’s actually the first time you play it, perhaps an overwhelming amount of ways to customize your run.

Lets start with your character. There’s a lot and it goes from the classic Nicktoons like Rugrats and Ren and Stimpy, to modern shows like Loud House, and even IPs owned by Nick like Garfield and TMNT! Also Jojo Siwa. Then we’ll get to your vehicle, from a car or bike. Up next is the vehicle itself, and if you’ve seen one in a Nick show, it’ll probably be included. Give me that Mauve Avenger. Next we have your wheels, then exhaust pipes. All with their own unique looks and stats. Then we get to the crew, which is compiled of a lot more characters than you’d be playing as.

Adding your crew mates is rather interesting. It’s as if you had assists like you would in a Marvel Vs. fighter, but for a racing game. These are just perks and buffs. Making specific items appear, boosting when using an item or getting hit. Maybe even dropping obstacles when you drive through currency. Your leader even gives you some nice special moves. Of course Mr. Krabs magnetizes currency to you.

It’s kinda obvious Nick Kart Racers 3 is Nickelodeon themed, from it’s roster, carts, and courses, of which there are dozens. Yet, something always seemed off. Not off as in “this feels cheap or a ripoff”, but nothing feels explicitly like it’s supposed to when it comes to the courses. Nothing really jumps out to say it’s Nickelodeon outside of a lot of slime, which I’d hope is the case given the game’s namesake. But say we removed the green slime, the characters. This would end up just feeling like a neat water themed racer. Still a fun time, but it doesn’t feel engrained enough. Something like SASRT had that Sega identity in stages outside of it’s crummy items. I really love the Double Dare stage though.

The explicit “Nick-ness” of Nick Kart Racers 3 comes from it’s slime mechanics. You have a few different colors of Slime, Green, Orange, and Purple. Green slime is given any time you do a stunt off a ramp, run into slime, or drift. You even get it collecting coins. This allows you to use those previously mention special moves. Next is Orange Slime, which can boost the items you use. Finally comes Purple. So with Purple, it’s from these Slime Slides. Alternate paths that have you moving automatically, only needing to jump over some obstacles to go faster, ending with you having that slime meter pretty full. Going through Slime Washes can get you coated and speed boosted.

So Nick Kart Racers has a lot of content. A LOT of it. Not quite to an overwhelming point, but it’ll keep you busy. You have ten cups in this game’s equivalent to a grand priz mode. An arena mode that definitely feels more of that Nick flavor, and a real in-depth challenge mode, which unlocks some of the more fun characters like Powdered Toast Man! You can even play this all online!

Collecting Slime Coins will not only speed you up in races, but can be used in the Garage to buy new racers or parts. This is also one of the biggest flaw in the game. The grind for coins is slow and characters are expensive, from 150 to 200ish. But wait, even if you want characters, there’s still parts and karts or paint jobs. Unless you want to play using the same kart for hours and hours. Buying stuff with currency in these games or long unlocks is fine. The grind is too strong here though. I just want to play as Reptar in the Turtle Van!

To me, Nick Kart Racers 3 feels like it’s just one step away from being a legitimate fantastic racing game. It’s no so much a budget issue this time, but design flaws that I’m positive can be fiddled with by future updates, if allowed. The biggest flaw of which being the drip feed of currency. Please fix that, I completely understand that you want players to keep playing, but the game doesn’t need to have a grind to do that, it’s fun on it’s own. You shouldn’t have to play dozens and dozens of races to unlock a racer and then maybe a new kart or bike.

All that aside, I like this game. I enjoy the large cast, the vast number of everything and am honestly surprised how much I liked it. But those flaws just kinda soil an otherwise fun game.

*Game Download Code graciously provided for the purpose of reivew