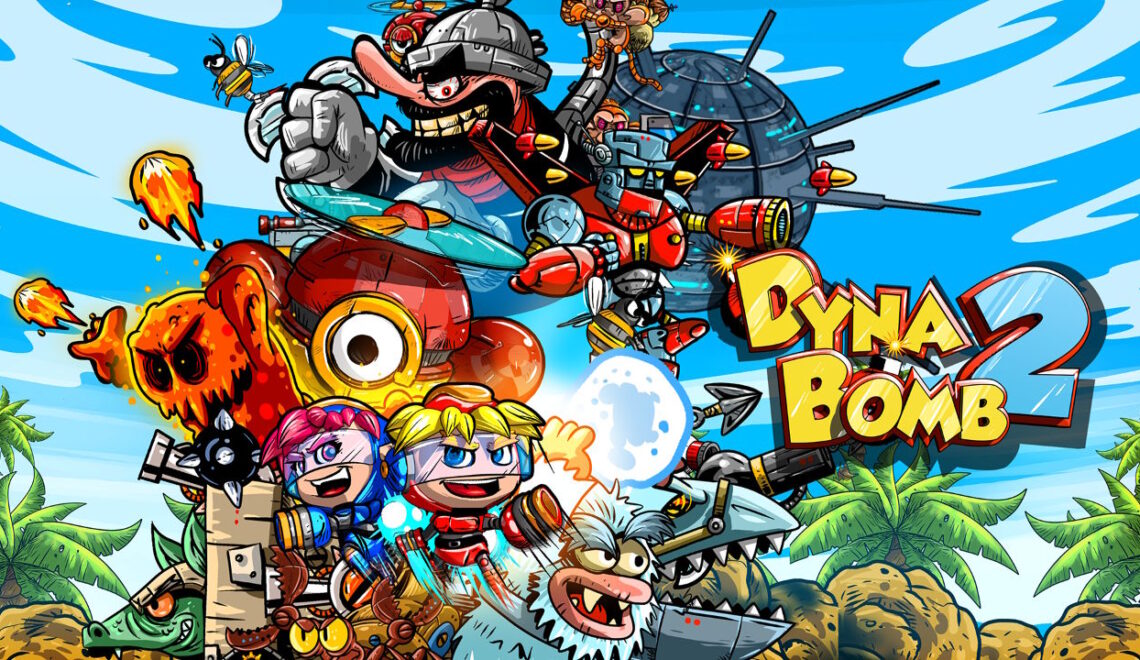 Jack and Ela, heroes galore, just want to enjoy a beach vacation. If they could, though, Dyna Bomb 2 wouldn’t really happen, would it? When robots and super villains disrupt their plans, it’s time to blow stuff up. Players get to pick whether to play as either hero – or you can grab a friend and you each get to pick a character in the game’s co-op mode. The game is a barebones, challenging platformer that frustrates more than it soars – but that doesn’t mean there isn’t something there to recommend it.

Run and Gun, Jump and Jet

Dyna Bomb 2’s controls are pretty simple. You can run, jump, and fly if you hold down the jump button (and you’ve got some jet fuel in the tank, which you can replenish by running). You can control the depth of your bomb shots by using different triggers – one shoots short, one goes long. Aiming is tricky either way – but I found getting close and using the short shot to be more accurate. It also opens you up to more damage, which is tricky because your health is strictly limited. Easy, normal, and hard modes only give you three, two, or one hit points, respectively. The simple mechanics belie the game’s true difficulty. The unforgiving nature of the game’s health points means you can’t make many – or any, on hard mode – mistakes during a level. Unfortunately, this means that the game often crosses the line between challenging and exasperating.

Order of the Worlds

The object of most levels is to explore until you find a key, which unlocks the door to the next level. Each of the game’s eight areas contains nine levels – seven exploratory areas, one boss fight, and one tunnel that leads to the next area. Bosses tend to be the most challenging levels, but it’s the exploratory levels that can be the most frustrating. For instance, some enemies throw projectiles even when they’re not on screen. So on your first playthrough of a level you may be dodging an on-screen enemy which puts you in the path of a projectile you didn’t see thrown from an enemy you didn’t know was there with no sounds cues to announce it, so you get hit and boom! Game over. Level design elements like this drag down the whole experience, as they feel like a cheap shot more than a legitimate challenge.

You can purchase upgrades using diamonds or balloons collected during levels. Diamonds can be spent on temporary upgrades that go away as soon as you die, if not sooner. For instance, you can buy a bubble that basically gives you one additional hit point. It goes away as soon as you get hit. You can also get a magnet that draws in diamonds from farther away, which is useful and stays active as long as you don’t die. Balloons can be used to purchase permanent upgrades like a force field that uses your jet fuel or upgrading your weapon to either shoot missiles or lay mines instead of launching bombs.

The biggest issue with the upgrade system is one simple question: what do the permanent upgrades really buy you? Not a whole lot, honestly. The different weapons don’t change the combat dynamic much, if at all. The force field is pretty useful, admittedly, but only if you don’t run out of fuel. Since it is most useful during boss fights which require a lot more jumping than running, though, keeping your fuel reserves full for flying is the more useful option. Getting the glider so you can restore fuel while in the air does offset this a little, but it’s all a lot of work that inflates the time spent playing the game without adding much additional entertainment value. It would be one thing if the upgrades could be used to open new paths or added new gameplay mechanics, but they don’t. Therefore they end up feeling superfluous at best.

The downside to diamonds is you only get to keep them if you finish a level – die, and you start the level over with zero. This is true of balloons, too, but given that the prices of the most useful items cost more than you can get by completing a single level, if you’re stuck and need to buy a bubble to give you an edge you have to go back and replay (and beat!) a previous level multiple times. I don’t play platformers to grind – that’s only fun in RPGs!

Does Dyna Bomb, Too?

Dyna Bomb 2 has some of the right elements to be a great experience. The gameplay mechanics are sound and consistent, but just loose enough to take some skill to master. The graphics are bright, colorful, and inviting, and the music is pretty decent but can be grating after too long spent in certain areas (the jungle music gets old fast). Unfortunately, that’s where things fall off. The level design provides too many cheap shots, the upgrade system is mostly there for show, and the unforgiving health system often punishes you for the game’s design mistakes more than your own (although the game dishes out plenty of punishment for those, too). In the end, Dyna Bomb 2 is a tough slog through the mire, rendering its most promising aspects fruitless.