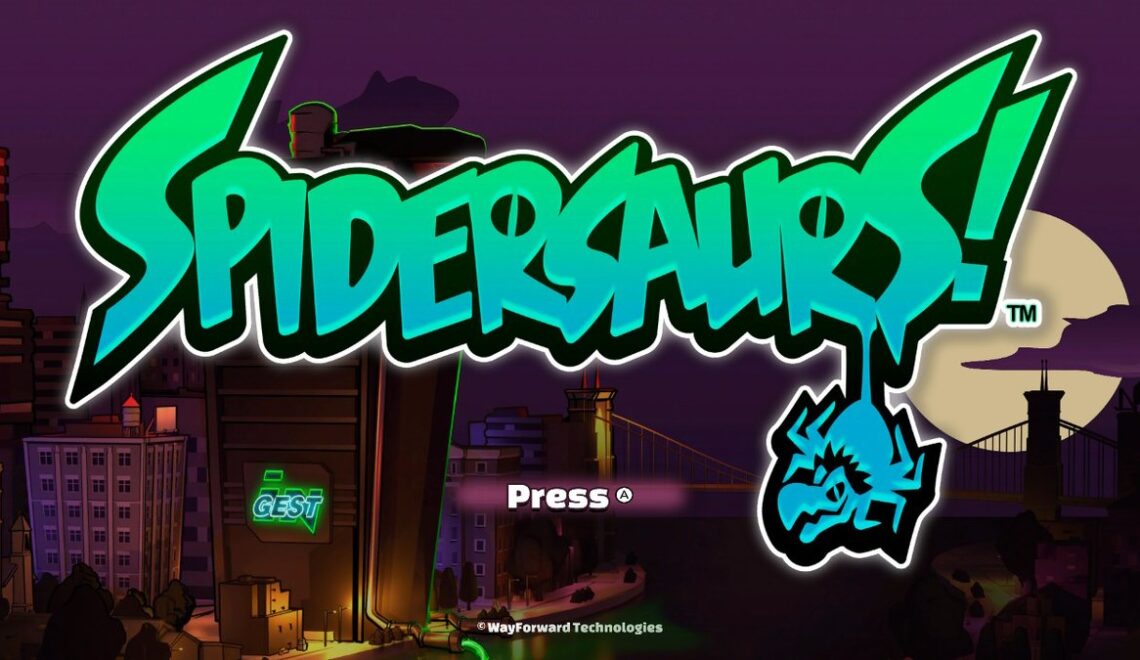 You’ve heard it, they were too busy asking whether or not they could combine spiders and dinosaurs to make food and not if they should….wait what? Yes, this is the premise of Spidersaurs. The monstrosities of god are wrecking havoc and only a rockstar and a police officer baseball player can stop them. Yeah, Spidersaurs has kid of that 80’s cartoon feel, I’m ok with that.

So imagine if WayForward made a Contra game…wait they already did, it was Contra 4. Ok, imagine if they made a Contra-like game that was super cartoony, super colorful, and with a downright ridiculous premise. And like later Contra games, you can play this with as friend! Spidersaurs is a run and gun, you get weapon drops that have the regulars. Rapid, spread, laser, shock, and one that has kind of an arc that will then drag on the ground. You collect more of one drop of a weapon and it gets stronger. You get hit, it downgrades, you die, it goes away.

You have three hits on normal, but it’s not like this is a super easy game. In fact, I got a game over quite a few times. But I like to consider my first run of some of these stages as a practice run. You learn where enemies will move, where they move, where they shoot at, and most importantly boss patters. Don’t worry too much though, since stages are usually cut into pieces, usually after a mid-boss. So if you die at the stage’s boss, you won’t have to do the whole stage over.

Occasionally you’ll get some food from the spidersaurs you kill. It’ll heal you, so you’ll want to grab it. When you beat a boss, you get a nice big ol’ piece of meat. This grants you a new ability. So to say, you’re evolving. Double Jumps are great. The game definitely starts feeling more like you’re in control the deeper you get. I’d prefer you didn’t unlock things like wall grab by beating a stage (even if it’s the first stage), but in context it’s fine.

It’s a WayForward game, it’s presentation is fantastic. A great animated intro, full voice acting, rockin’ music, and some nice character designs. Like, legit, Dr. Sorez has her hair styled like a Black Widow…I wonder if she’s actually evil. If you’ve played WayForward’s games that forgo spirework to HD art, then you should get the gist of how Spidersaurs looks. Kinda like a cartoon, and unlike some of their other games, it doesn’t have 2D art for characters and then very jarringly different 3D backgrounds. It’s consistent.

I’m not sure if my previous comments on it being like Contra inferred such, but this is a good controlling game, especially when you get those new abilities. Standard stuff, running, shooting, you aim when you move, but you can lock down your movement to aim precisely if needed.

I really like Spidersaurs. If I had one real big issue, I wish that there’d be some consistency with how falling into a bottomless pit, of which if you’re moving vertically, will be just falling lower than you are. Sometimes it just does one damage, sometimes it’s an insta kill. Otherwise, if you want that Contra clone that seems to really be popular lately (though this was Apple Arcade game in 2019, coincidentally the same year we got Contra Rogue Corps). If you’re into these kinds of games and have a friend, you have no excuse, play Spidersaurs.